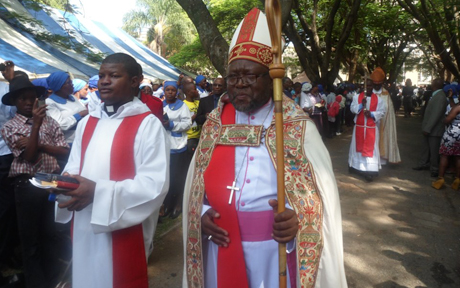 Bishop of Harare Chad Gandiya (R) said the diocese is having to rebuild after five years of persecution. Photo: ACNS

[Anglican Communion News Service] The construction of a much-needed clinic has resumed five years after a property-grab by an excommunicated bishop forced the Anglicans in Harare to abandon the project.

The Memorial Clinic project was initiated by members of the Anglican Wabvuwi Guild and Anglican clergy following the death of five members in a road traffic accident in November 1997 at a turnoff close to St. Clare’s Mission.

Construction was halted in 2007 when Nolbert Kunonga, a former bishop of the Church of the Province of Central Africa (CPCA), and his supporters seized CPCA church properties including buildings, schools and orphanages. He then denied Anglicans access to any of the seized properties including the project site and the nearby church building.

Kunonga, however, failed to carry on with the clinic’s construction and so stalled a development that had been approved by the Murewa Rural District Council (MRDC), the local traditional leadership, and the Ministry of Health and Child Welfare.

St. Clare’s Memorial Clinic is a US$150,000 project expected to serve around 30,000 people living in Murewa, a Zimbabwean village located about 70 kilometers northeast of Harare. It will offer key health services such as a maternity department and outpatient services for adults and children.

In a statement delivered on Aug. 27, Bishop of Harare Chad Gandiya said, “The initiative to build a health center in Murewa is work in progress for the Anglican diocese as we rebuild the church following five years of persecution by enemies of progress.

“More support is still required from the corporate world and individuals to ensure that the project is completed on time and begins to serve the Murewa community in the delivery of standard health services.

“To date we have spent US$30,850 and have since reached window level. We expect that, with proper support from corporate world and other well-wishers, the process can be expedited and completed by August 2014.”

Gandiya praised the local communities for contributing their labor and time towards the project. “In line with its mission, the Anglican Diocese of Harare (CPCA) commends the work being done at the project site,” he said. “This project links directly with our various health initiatives across the diocese where we have HIV/AIDS projects, orphanages and functional institutions within the education sector.”

In December last year, the Supreme Court in Zimbabwe ruled that the Church of the Province of Central Africa (CPCA) was the rightful owner of the properties. However, after five years of neglect by Kunonga and his followers, most of its buildings had been run down and many construction projects stalled. Refurbishing or finishing construction work is costing the diocese thousands of dollars.