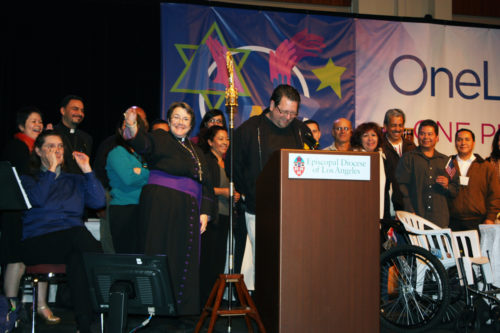 Hee, 50, juggles two teaching positions with busy family and other responsibilities. But every other month, he spends an intense 72-hour weekend at a local retreat center, learning the academics and practicalities of ordained church leadership.

“Local formation is important for Hawai’i because we need to raise up our own priests,” Hee wrote in an e-mail to ENS.

“Currently, there is only one priest of Hawaiian descent. All the other priests have been transplants; many return to their homes, eventually leaving Hawai’i. Raising up our own priests will increase the likelihood of them staying here.”

Similarly, in the Diocese of Los Angeles, Carlos Ruvalcaba, 42, says the Spanish language Instituto de Liderazgo, which trains laity, propelled him to local lay leadership and now, onward to discernment for ordination.

“The Instituto is very important for our diocese and for the church as a whole, because we serve one of the largest Hispano/Latino populations countrywide, and we have so many people with a huge desire to serve God and their neighbors,” he said. “But, we are a community that needs to be educated and prepared to understand the structure, government, history, beliefs and life of the Episcopal Church.

“It’s important that we continue supporting programs like this, since our actual systems fail to identify potential church leaders from poor and immigrant communities,” added Ruvalcaba, who was born in Guadalajara, Mexico.

Like Los Angeles and Hawai’i, dioceses across the church are increasingly offering alternative programs to overcome the career, family, financial and cultural challenges inherent in more traditional formation of lay and ordained leaders.

Hawai’i: a case of local formation

One such alternative is local formation, according to the Rev. Canon Liz Beasley, who is canon to the ordinary in Hawai’i. The diocese launched Waiolaihui’ia in January with three students and another person auditing part of the coursework, she said.

Waiolaihui’ia means “the gathering of waters,” according to Hee, who teaches preschoolers with disabilities and also instructs university students preparing for teaching careers.

“We chose this because we come from all over the state and together we are intermingling and learning. Water or “wai” is important in our culture as it sustains the taro that we grow. Water is also important in our church as an important part of the baptismal covenant. That’s how we came up with our name.”

The curriculum comes from the Iona Initiative, which is based on the Iona School for bivocational priests and deacons in the Diocese of Texas. The three-year local training program for priests and deacons is currently in use in eight rural and remote dioceses, including: Wyoming, Oklahoma, Arkansas, West Texas, Northwest Texas, Northeast Texas and Mississippi, in conjunction with the Episcopal Seminary of the Southwest.

“People in the program already have significant jobs and families they’ve raised and they don’t have the capability to go to seminary for three years,” Beasley said during a telephone interview. “It also doesn’t make sense for someone to spend the money to go to seminary and come back and have maybe a part-time job. That doesn’t seem financially responsible,” she added.

Although the current students are all native Hawaiian and their “experience and cultures do come into the discussion and the learning” the curriculum is adaptable to any group, she said. Diocesan clergy are trained to serve as teachers and mentors; students live in community during the intensive weekend sessions. Some coursework is available on videotaped and power-point presentations and students complete substantial amounts of homework in-between sessions, she added.

The cost is about $2,000 per year for students with the diocese absorbing other costs for the three-year program. It aims to prepare second-career priests for local ordination but is not a replacement for the traditional path to seminary; the diocese still sends recent college graduates to residential seminaries, she said.

“We’re really excited about this,” Beasley said. “We want priests who know what it means to live in Hawai’i and are committed to being here. This is a long-range view, we figure if we’re raising up people who already call this their home, they’re more likely to stay.”

For the Rt. Rev. Carol Gallagher, an assisting bishop in North Dakota, another possibility is making local formation available on a larger regional scale, especially within cultural contexts.

A member of the Cherokee Nation, she has been serving in Alaska recently, and crafting the Bishops Native Collaborative, (BNC) a consortium established by the bishops of Alaska, North Dakota, South Dakota and Navajoland, to provide training for lay and ordained leaders by sharing resources for theological education.

Most of the dioceses have offered local training separately; this is the first attempt to do so collaboratively, she said.

“It has been a struggle to raise up native leaders and part of that is not only the cost, as it is for everybody, but the radical removal from their traditional learning methodology,” Gallagher said.

The BNC hopes to find “ways to do that locally but also to share our resources through technology, so that folks in Alaska can be learning alongside folks in Navajoland, even though they might be using different languages to talk about common issues,” she said during a telephone interview.

Generally speaking, “Native people—and I don’t like to use universals because we’re very different, tribe to tribe, but in terms of educational processes—it’s really important to have a cohort group to be working with,” Gallagher said.

“One of the challenges of going to one of our denominational seminaries often is, there’s no one there who speaks your language or understands your experience.”

Additionally, church processes, such as commissions on ministry, may also tend to deter Native Americans, who rely on more communal support and feel isolated, she said.

The BNC as currently envisioned would include local mentors and teachers and would present coursework via teleconferencing and other educational materials. Students could gather every month or six weeks for intensive sessions. Gallagher hopes to launch it next year.

South Dakota Bishop John Tarrant said the diocese has historically trained clergy locally through the Niobrara School for Ministry but is hoping to perhaps reinvent that training via the BNC.

It is also a pragmatic way of stretching limited resources as “our goal is to make it extraordinarily affordable,” Gallagher added.

All of which is welcome news for Marla Liggett, 59, of Winner, South Dakota, who “keeps plugging away and hopes to be ordained eventually.”

The challenges she faces exemplify those of many second-career potential clergy. She is the full-time treasurer for both Tripp and Todd counties and her family life—including grandchildren and daily visits to a local nursing home to check on her ailing 93-year-old mother—occupy much of her time.

She is studying both the Old and New Testaments via an online Yale University course and meets with a local mentor on Wednesdays. On weekends, she assists at the altar at Trinity Church in Winner with the Rev. Stan Woolley.

Liggett, who is part-Lakota, hopes to acquire an audio version of the Yale coursework, to listen to while driving. She is nonetheless excited about the opportunities created by the local training “to do something really new. I just did a sermon about the bent over woman and how we are kind of like that now,” she said. “Before, you just didn’t see a lot of women in the priesthood.”

Los Angeles Suffragan Bishop Diane Bruce, who has taught classes at the diocesan Spanish language Instituto de Liderazgo, said the program works because “congregations are being strengthened by it.”

With about 30 congregations engaging Hispanic ministry, the diocese benefits from the three-year program, which empowers students for ministry, in both church and community, she said.

“We have lay leaders who know what’s going on and what needs to happen,” Bruce said. “Clergy are getting assistance. They are also talking about having members of the congregation go out and work in other congregations while they’re going through the Instituto to get exposed to different ways of doing church.”

That’s exactly what happened for Carlos Ruvalcaba, and more. A parishioner at St. Mark’s Church in Van Nuys, California, in his third year of Instituto studies and planning to begin formal discernment for ordination in the fall.

“I’ve learned a lot about my church, about the basics for almost every ministry you can get involved in, in your congregation, but the most important thing is, I’ve had the opportunity to discern some deeper questions, like is God calling me? What is he looking for me to do? What can I offer to the service of God?” Ruvalcaba said.

He and others, like the Rev. Eric Law, founder and executive director of the Kaleidoscope Institute, say that current formal church structures may unintentionally deter people of color and culturally sensitive training is helpful for formation. The Kaleidoscope Institute is a Los Angeles-based consulting firm whose mission is to create inclusive and sustainable churches and communities.

“Most leadership training materials in the Episcopal Church and in churches in general, come from a European and in our case English-speaking foundation. There’s nothing wrong with that, except it doesn’t work in places that are multicultural or non-European-based,” Law said.

For example, a European context assumes that participants in class discussions “who have something to say” will automatically volunteer their opinions. But, in many non-European cultures, “people were trained not to speak as an individual but to speak on behalf of the community and are therefore reluctant to offer their individual thoughts right away,” according to Law. “Very often, they (non-Europeans) end up not speaking and were perceived that they didn’t want to participate,” he said.

The Instituto currently has about 50 students enrolled in classes, which meet once a month on Saturdays at various locations across the diocese. Costs are kept at about $100 per student per semester, for basic expenses, according to the Rev. Roberto Martinez, vicar of La Iglesia Magdalena in Glendale, California, an Instituto co-director. Local clergy and educators serve as teachers and mentors. The classes are taught in Spanish.

Subjects offered range from liturgy and preaching to church history, pastoral care, evangelism and Christian education, Martinez said. “The idea is the lay leader goes back to his congregation and is empowered to work with the priest to develop the congregation.”

The Rev. Vincent Schwahn, rector of St. Mark’s, Van Nuys and a co-director of the Instituto, said sheer demographics make the Instituto an important and necessary undertaking not just for the L.A. diocese, but for the entire church … “because what we’re about in our essence is doing mission and creating disciples.

“Los Angeles, is the second largest Mexican city in the world, after Mexico City, and that doesn’t even include the rest of the Latino population here,” says Schwahn.

He added that: “It’s such an exciting project it’s so wonderful to see people’s lives being changed and transformed and people getting excited about being members of their community; the Instituto has that kind of vision.”