[Episcopal News Service] The Rev. Canon William “Jay” Geisler has baptized during a biker rally over a motorcycle sidecar, performed weddings with the bridal couple in black leather and sparked rousing cheers when he told mourners “there’s only two types of bikers — those who have gone down and those who will go down.”

“Someone got up [at a funeral] and asked ‘where’s Billy?’ and I started talking about God’s love for all of us. I said he’s with God of course,” Geisler recalled during a recent interview. “Everybody erupted with cheers of happiness, because they’ve been told they’re bad people.”

An avid biker, Geisler, 57, rector of St. Peter’s Episcopal Church in Pittsburgh, realized the need for a motorcycle ministry after a biker said to him, “you don’t know what it’s like to look like Frankenstein and have the heart of Shirley Temple.”

He and other biker priests say their love of motorcycles has opened up new avenues to proclaim the Gospel to an overlooked and underserved community.

Motorcycle masses in Maryland
The Rev. Steve McCarty was inspired to begin a motorcycle ministry after another biker asked about the Episcopal shield on his jacket.

“I said, yeah I’m an Episcopal priest,” recalled McCarty, a biker since age 16. “We spent an hour and a half talking about his faith and how he’d been shunned from the church he was at, how they didn’t accept him, and he didn’t think he was good enough to go there. 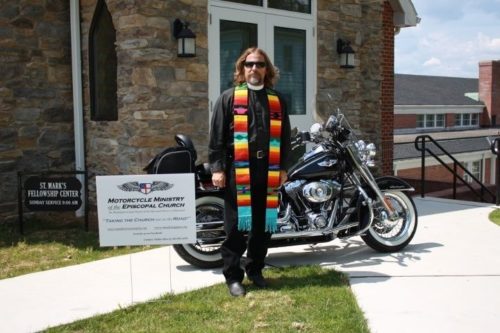 “He knew Scripture. He said, ‘I need someplace where I can be accepted the way I am.’ I thought, maybe I’ll do something about it,” said McCarty, vicar at St. Andrew’s Church in Clear Springs, Maryland.

He began holding motorcycle masses one Saturday evening a month in June 2012 at St. Mark’s Church in Lappans. The services have grown to about 30 regular worshipers.

After Eucharist, “if the weather’s good, we take a short ride to some place to eat,” said McCarty, 53, a retired Maryland state trooper.

Not all of the once-monthly motorcycle worshipers are bikers, however, but all of the offerings – collected by passing a motorcycle helmet – are donated to local food banks, shelters and other human service agencies assisting the community.

McCarty, who rides a Harley Davidson, says he has been able to make “good community” also by having a booth at local biker rallies. “People come by – people tattooed from knuckle to neck – and say they’ve tried to find a church that would take them, but that churches always told them to cover themselves up.

“One guy told me that, ‘I’ve got tattoos, but my soul’s not tattooed. He asked for a blessing and I said yeah, I can do that.”

He has become known as that “biker priest” and jokingly admits to sometimes speaking “Harley language.” Appearances may deceive, however; his beard and mustache often “throw people off,” added McCarty. “It’s funny. It gives me fodder for sermons sometimes, you know like, don’t judge.”

For Geisler, having spent time in jail is “a good thing” for his motorcycle ministry because it makes him “much more human” to his flock, he says.

The Pittsburgh native is a former steelworker and a former Roman Catholic priest, who was jailed during protests of the 1980s steel mill closings and loss of worker benefits and jobs. An Episcopal priest since 1999 and a biker for nearly 40 years, his ministry has grown because “bikers know other bikers.”

Like McCarty, he says a church medal on his BMW motorcycle often arouses curiosity and leads to requests for pastoral care.

“I am frequently contacted to do funerals for bikers who are alienated from church,” he said during a recent telephone interview with ENS. “I try to carry the public proclamation of the Gospel into their language.”

Describing what hell would be like to mourners at a recent funeral, he said: “It’d be like you in the rain, completely alone with a motorcycle and you can’t get it started. But, you keep trying to kick-start it, but it won’t turn over and you’re just frustrated.”

On the other hand, “heaven is a place where we’re all together as family and celebrating those things that we enjoy.”

Geisler, and his congregation, are a series of contradictions. The church blends wealth and poverty, privilege and marginalization, the urban and suburban. “There are people here with education and wealth, and others with street smarts,” he says. “We have immigrants from Romania, refugees from the former Yugoslavia and a group from Ethiopia.”

He officiates at an annual blessing of the bikes and also mentors new clergy, including the Rev. Frank Yesko, a psychologist and Harley enthusiast. Yesko was ordained June 15 and will begin serving as deacon-in-charge of St. Barnabas in Breckenridge, Pennsylvania in September.

“It’s been an incredible journey,” said Yesko, 56, a community college psychology teacher, who acknowledged that Geisler’s mentorship fueled what might have been an unlikely path to ordination.

“As I continued to grow and we got closer, I considered him my spiritual mentor or advisor,” he recalled. “I started getting active in the church, and it snowballed.”

He views his motorcycle as “a vehicle to reach out. I try to be open-minded in terms of the opportunity to serve God,” he said.

“I try not to rule out any possibilities. I believe serving God encompasses all of my life, including riding a motorcycle. Breaking down those stereotypes is a wonderful way to serve God.”

‘Harley Hallelujahs’ in Mississippi
The Rev. Ann Whitaker says she misses conducting biker masses now that she’s moved on from serving the Episcopal Church of the Creator in Clinton, Mississippi, to St. Peter’s Church in Oxford.

“I think we’re missing something when we don’t offer it, there’s a lot of bikers out there,” she said during a recent telephone interview from Oxford.

She isn’t a biker but took a 150-mile ride, to Vicksburg, on the back of one in 2008. It “reminded me of the Holy Spirit,” Whitaker recalled in a reflection she authored, titled “Harley Hallelujahs.”

“At first, I simply wanted to grab the sidebars and hold on. I could not see over Pete Jr., or around him and certainly not through him. If I was going to enjoy the ride, I simply had to trust him to keep me safe,” she wrote.

Her husband drove the entire way behind them in a car but “only once did I truly feel unsafe. A log truck coming from the opposite direction moved a mighty wind; later I laughed and said I was still pulling splinters out of my face,” she wrote. “It was amazing how different things smell on the back of a bike on the open road; you really smell the wood on those log trucks up close and personal! Riding into Vicksburg, we smelled bacon cooking along the road.”

“I saw so many parallels in this place of where we have to trust God with every fiber of our being,” added Whitaker during a recent telephone interview with ENS. “I had to learn to not fight him. If he leaned to the right going around a curve I had to lean with him; otherwise we’d have wiped out.”

The experience also raised issues about “how do we draw people in who are unchurched,” Whitaker said. “How do we draw people who might not sit in church ordinarily on Sunday morning and what do they have to say to us? It has a lot to say about how we meet God.”

‘Blessing of the wheels’ on O’ahu
On Aug. 25, the Rev. Paul Klitzke blessed wheels of all sorts – skateboards, roller skates, bicycles, cars, vans, motorcycles, and even a walker – at St. Nicholas Church, Kapolei, in the Episcopal Diocese of Hawai’i.

The 33-year-old Klitzke believes that, while his tattoos and Kawasaki Vulcan may “change the crowd and the dynamic at church some, mostly they open up the door for conversations with all kinds of people. It gives me the opportunity to meet people I wouldn’t otherwise meet.”

He began riding motorcycles “because of a guy in my church” while serving in the Diocese of Alaska. “He told me if I took the basic rider course he’d lend me a bike to get me started.”

He has tattoos of: a Jerusalem cross; a triquetra, symbolizing the Trinity; a tree of life, and a dove, representing the Holy Spirit. “Then this year I added around my cross, to symbolize the four gospels, the signs of the evangelist, a winged person, a winged ox, a winged lion and an eagle,” he said.

Both his tattoos and his bike are often conversation-starters and stereotype-removers, he said.

“Often, people are surprised to hear I’m a priest,” he recalled. “They talk to me because they like my tattoos or because I’m on a motorcycle. It’s a different sense of community, but when they ask about my tattoos they are asking about my relationship with God, and whether they intend to or not, it opens up a conversation about church and faith.

Both help to dispel stereotypes.