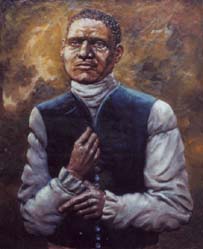 [Diocese of Connecticut] The Rev. Amy Welin started as the newly called priest-in-charge of St. John’s, Waterbury, in September 2012. A few months after that, Amy recalled in a phone interview, she received a call from the recently retired director of the Mattatuck Museum in Waterbury, Marie Galbraith, asking Amy if she would be willing to bury a man named “Fortune” who had died in 1798.

As described on the museum’s website, “Fortune was an African American man enslaved by Waterbury physician Dr. Preserved Porter in the late 18th century.”

There was an account, from an old reference book named Anderson’s History of Waterbury, that a slave named Larry had died by drowning in the Naugatuck River and that his bones had been “prepared for anatomical study” by Dr. Porter, who was a bone surgeon at a time when access to skeletons for medical study was extremely limited.

After research begun in the 1990s, the bones were determined to actually be those of Fortune.

Amy Welin also learned that Dr. Porter’s wife, Lydia, was a member of St. John’s Episcopal Church in Waterbury and it was likely thanks to her that Fortune had been baptized there in December 1797.

“When I realized he had been baptized at St. John’s,” Amy said, “I thought, ‘Oh my heavens, this man is actually my parishioner!'” She gladly agreed to bury “Mr. Fortune,” as she calls him, out of respect.

“I am very excited,” Amy said. “We are giving a parishioner the decent and respectful burial that he was denied 215 years ago.”

The service, followed by burial, then a reception at the Mattatuck Museum, has been scheduled for Thursday, September 12, starting at 4 p.m.

The gruesome details
Amy said that according to the story in Anderson’s History, when the body was recovered, Dr. Porter “processed his body at the riverside,” brought the bones back to his estate on the east side of Waterbury, and had them boiled. The bones were then used for anatomical study. The generations of bone doctors that followed in his family passed the bones down over the years.

In the 1930s, one of Dr. Porter’s descendants, also a physician, sent the bones to be reticulated – put together to make a skeleton – in Germany and then gave the skeleton to the Mattatuck Museum. It came with the name “Larry” written on his forehead, and each bone bore identification, in writing.

The skeleton was put on display in the 1940s and it became a popular attraction. During the 1960s the museum’s collections were refocused and the skeleton was displayed as Waterbury’s first “medical museum” and “a tangible reminder that slavery existed in the North.” Out of respect for the remains, and the community, the museum director took the skeleton down in 1970 and stored it in the basement.

Community-based history committee takes the lead
In the early 1990s, Maxine Watts, who was the president of the Waterbury chapter of the NAACP, realized there was not much yet recorded about the city’s African American history and asked the Mattatuck Museum to guide the group of volunteers in a project to locate the city’s oldest African Americans and record their life stories. The museum provided expert training, and committee members listened to and recorded the stories of over 40 people eighty years old and over. They also created an archive of photos of these residents from the early 20th century.

“The committee members did an enormous amount of work and produced a body of history that will be helpful forever to understanding the history of African Americans in Waterbury,” said Marie Galbraith, who served as the museum’s liaison to the committee.

According to Maxine, just after the committee had finished that work she received a letter from a city resident that challenged them further.

“It said that the committee had done a great job, but they should ‘get with it’ because there was an older African American in the city,” she said. The writer had included an old postcard from the museum of “Larry the Skeleton.”

The committee, working with the museum, took up the challenge and sought the assistance of anthropologists, archeologists, and other scientists and historians in Connecticut. They learned the bones were really those of Fortune, and they wanted to learn where he had been born, how old he was when he died, the kind of work he did, and how he died.

Research on Fortune’s bones
Fortune’s remains were taken to Howard University where the late Dr. Mark Mack, who taught there, carefully washed off the words and numbers on the bones. Washing off glue that held the bones together revealed a damaged vertebra at the top of his spinal column.

“Dr. Mack believed this was the cause of Fortune’s death,” said Marie Galbraith.

But as there was no investigation at that time, drowning was listed as the cause of death on the death certificate, issued in 2013.

More recently, in the spring of 2013 a team of diagnostic imagining professors and students from Quinnipiac University in Hamden, Connecticut, studied the skeleton. The bones were X-rayed, given CT scans, and a 3-D printer will be used to make replicas of the bones. DNA analysis is currently underway, as well, according to the museum.

So far, they’ve learned that Fortune, who was 50 to 60 years old when he died, owned a small house on the Porter’s land. He lived there with his wife Dinah and their three children, Jacob, Mira, and Roxa. According to the museum’s research, Fortune also had an older son, Africa.

Early researchers said that Fortune was a strong, rugged man, who had suffered several injuries before his death, and speculated he worked on the Porter’s farm. A more recent analysis suggested Fortune was not an agricultural worker. Continuing studies may provide more definitive answers, but there may always be questions, as well.

Two years after Fortune died, only Dinah and a young man named Luke were listed in the Porter’s household. The museum has searched for relatives, but hasn’t found anyone. They are hoping someone’s genealogical studies will lead them to Fortune.

Deciding it was time for Fortune to be buried
In 2003 the museum launched an exhibit, “Fortune’s Story: Larry’s Legacy.” They commissioned Marilyn Nelson, Connecticut’s Poet Laureate at the time, to write an elegy honoring Fortune, which she called,The Manumission Requiem. The Waterbury Symphony commissioned composer Dr. Ysaye M. Barnwell to set it to music.

In 2012, the Fortune’s Bones cantata was performed by the University of Maryland “by a full symphony, two choirs, seven soloists, and a chorus of African bells.” The community there raised the question of why Fortune had not been buried and the performance, as described on Dr. Barnwell’s website, was a way for the artists there, together, to “metaphorically set Fortune’s bones to rest.

Back in Waterbury the committee was making the final decision to literally set the bones to rest.

“We all agreed that it was time for him to be buried,” said Marie.”I think the committee and the museum made the right decision. We can now tell a real story about a real person, instead of a mythological skeleton.”

Maxine Watts admits she had been a holdout for not burying Fortune because of how much the scientists have learned about his life and his death. With new advances in science taking place all the time, she said, she was optimistic about how much more might be learned in the future. But after work done this past spring at Quinnipiac University to create lasting records, she finally agreed that there was sufficient information to continue research after his burial.

A burial for Mr. Fortune
The burial date is set for Thursday, September 12, starting at 4 p.m. It will include the service at St. John’s, followed by burial at Riverside Cemetery, and a reception following at the Mattatuck Museum until 7:30 p.m. The public is invited.

“Our theology is that by our baptism we are Mr. Fortune’s sisters and brothers in Christ, and we are burying him [as such],” said the Rev. Amy Welin of St. John’s. “We have the opportunity to address a wrong that was done … and to discern how this story invites us to change the way we live and interact with our neighbors.”

As part of that, during the burial service she plans to replace the Prayers of Intercession with the Litany of Repentance, from Ash Wednesday. The Hon. Steven R. Mullins, a state politician and president of the Southern Connecticut Chapter of the Union of Black Episcopalians, will serve as an MC for the event. A number of speakers, including Maxine Watts and pastors of several historically Black churches in Waterbury, will offer remarks. The Governor’s Foot Guard will accompany the casket to the cemetery.

Fortune’s burial in Riverside Cemetery would not have been possible at the time he died. In the 18th century, African Americans were buried in the “colored burial plot” of the old Grand Street Cemetery, which is now under the town library. St. John’s donated the burial plot and Alderson’s Funeral Homes, Inc., of Waterbury has donated the casket and the underground vault. Mr. Fortune’s earthly remains will take their rest among the pillars of 18th and 19th century Waterbury society.

Maxine is pleased with the plans for the day. “I think it’s going to be a really incredible day and a great and fitting sendoff for Mr. Fortune, recognizing all he’s been through,” she said.

The museum is working on a documentary and new resource material, and scientific research will continue using information now recorded. Although Maxine is glad they will continue to learn from science, she said that there are other questions that still need answers – such as, What was Fortune doing at that river? Why was the doctor there at the same time? And why did he have his medical instruments with him?

“I’m not a detective,” she said, “but something is wrong in the story there.”

While those parts of the story still trouble her, another part encourages her.

“He proved a point,” she said. “African American slaves were not considered fully human, but isn’t it ironic that the doctors used his bones for human study? Underneath the skin, we’re all the same. Mr. Fortune proved it in death, even though he never consented to it.”

— Karin Hamilton is the canon for mission communication and media for the Episcopal Diocese of Connecticut.