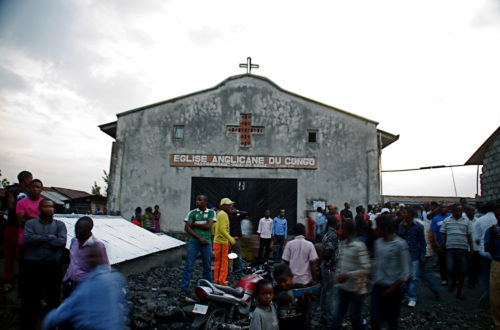 Bystanders gather around an Anglican church that was struck by mortars, wounding at least three, according to one witness, in Goma, eastern Congo, Aug. 22. Neighbors said at least five civilians were hit by mortar fire in Goma during a second day of heavy fighting between government forces and M23 rebels to the north of the town. The violence marked the first reports of civilians being wounded inside the city since late May, and prompted the United Nations peacekeeping mission to issue a statement saying it would take the ‘necessary steps to protect civilians.’ Photo: Joseph Kay, Associated Press

Claudaline Mikanirwa, the wife of the Rev. Desiré Mukanirwa, Anglican priest in Goma, said in an e-mail to church partners that “one displaced child died on [the] spot … In other places the bombs killed some people. Another bomb reached near our home … and touched a neighboring home but no one was injured. By the time Desiré and the children and other displaced people were at our home, I was still downtown in my shop. But all of us are fine.”

Mukanirwa said it would be difficult for people to worship in the church in its current state.

Numerous shells landed in residential areas of Goma on Aug. 22, killing at least four people and wounding 15, all of them civilians, according to an Aug. 24 UN News Centre report.

In an e-mail to ENS, Claudaline simply wrote: “Your prayers are needed.”

Another wave of bombs hit the city on Aug. 24 and the Associated Press reported Aug. 26 that Congolese soldiers and rebel forces suffered heavy casualties as they fought for a fifth day outside Goma.

For more than 15 years, the mineral-rich area of eastern Congo has been mired by violence, with the area around Goma the scene of intense fighting between the Congolese Army and the M23 rebel group. The rebels briefly occupied Goma in November 2012, according to the New York Times.

Located in Central Africa, the DRC is the second largest country on the continent, roughly the size of Europe, with a population of 75 million. From 1998 to 2003, nine African nations and 20 armed groups fought the Second Congo War, with the war and disease and starvation in its aftermath killing 5.4 million people. Millions of others were internally displaced and some sought asylum in neighboring countries.

Mukanirwa and his wife Claudaline provide a safe haven for victims of gender-based violence in the Anglican Diocese of Bukavu to work through their trauma and carve out a new life.

Claudaline also heads a nongovernmental organization that offers trauma counseling, combats adult illiteracy, trains women in professional and domestic skills, and feeds and cares for a growing population of malnourished orphans made parentless through rebel violence or disease or abandoned as rape victims.

Presiding Bishop Katharine Jefferts Schori, during a July 2011 visit to Goma, shared lunch with the Mukanirwas at their home and was introduced to their ministries.

The Anglican presence in Congo was established by Ugandan evangelist Apolo Kivebulaya in 1896. Today, the province includes about half a million Anglicans under the leadership of Archbishop Henri Isingoma, primate since 2009.