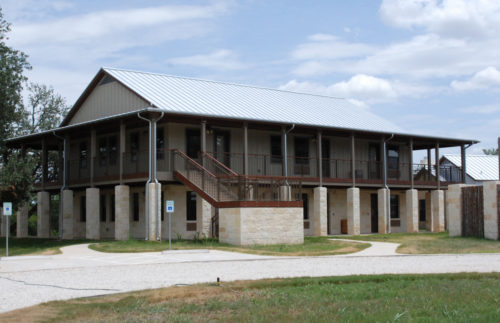 An eight-room, two-story lodging facility stands next to the new Steves Hall and overlooks the Guadalupe River.

Camp Capers, located in Waring, Texas, is in its 66th year of summer camps for young people in school grades three through 12. This year, as summer sessions began, construction efforts of a $3 million-dollar capital campaign came to completion. This first phase of renovation of the camp property yielded a new state-of-the-art meeting hall, welcome center, health care center, amphitheater, and lodging facilities.

The 78-acre property of Camp Capers was acquired in 1944, purchased for the diocese by Albert Steves, Jr. In deep appreciation, Steves Hall, the main meeting hall at Camp Capers, was named for Steves and his family. The original facility included a gathering area, rooms with a total of 12 beds, and a small infirmary.

“There is so much history here, and we’ve had two Steves Halls in the first 65 years of Camp Capers,” said Rob Watson, director of Camps and Conferences. “It was time to build a beautiful, larger, and multi-functional hall to honor the Steves family and their legacy and to serve the needs of our diocesan family.”

The new Steves Hall is a one-story building constructed of Douglas fir. Exposed beams and recessed lighting cross the ceiling. Large glass doors line three sides of the meeting area, and a wrap around porch overlooks the Guadalupe River with views of surrounding oak trees.

Separate from the main Steves Hall, two brand-new, two-story lodging facilities provide more places for camp staff and retreat groups to stay overnight. Each facility is two stories, one with eight rooms, the other with 12. Bedrooms in both lodges have two full-size beds and a private bath. A deck and porch wraps around all four sides of each lodge. 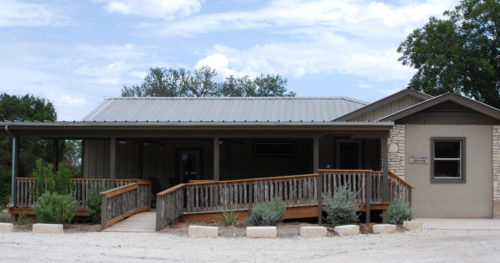 The new Welcome Center at Camp Capers houses a registration and staff offices, an alumni room, and summer camp store.

An older cabin on the camp property, which served as living quarters for the on-site cook during the summer, received an incredible face-lift during construction. The refurbished building serves as the new Welcome Center and features the registration office, camp store, and an alumni room complete with a coffee bar and tables. “The alumni room will remain open. We want those who cherish this place to be able to come in when they can, have a cup of coffee, and relax,” said Watson.

An expansive front porch welcomes visitors at the front of the center. Rockers and benches offer resting spots with views of the ropes course and the surrounding Texas Hill Country.

The previous camp registration office was transformed into the new Health Care Center. The center, with more space to utilize than the most recent infirmary, houses the summer nurse’s living quarters, two isolation rooms with two beds each, and a first aid and reception area where campers can come for their medications and/or urgent needs.

In addition to the new facilities, other projects were included in Phase I of the Camp Capers’ development plan. The 250-seat Will Stocker Amphitheater was built entirely of limestone and overlooks the Guadalupe River. This summer, closing services of camp sessions are being held in the amphitheater, where parents and friends have space to watch and participate. The amphitheater was proposed by the Stocker family in thanksgiving for Will, who was a Camp Capers’ camper and music director and was involved in the life of the diocese. Will died in December of 2010.

A few shade structures have been built near the ropes course and riverbank, with benches and tables underneath to escape the warm Central Texas sun. Fifty oak trees will be planted this fall as part of the ongoing tree planting ministry at Camp Capers, which has resulted in 300 new trees since 2008.

A dedication service of the new buildings is scheduled for Sunday, Oct. 20, at 3:30 p.m. at Camp Capers. Camp alumni and friends, as well as clergy from around the diocese, are invited to attend.

Learn more about Camp Capers in the Diocese of West Texas here. The diocese also has a retreat and conference center on Mustang Island near Corpus Christi, Texas, and a summer adventure program in James Park, Colorado.

— Laura Shaver is the communications officer for the Diocese of West Texas.