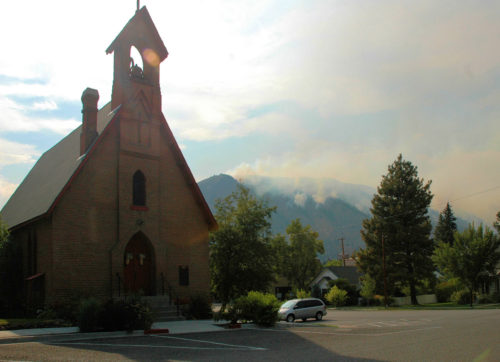 The Beaver Creek Fire can be seen burning in the mountains above Emmanuel Episcopal Church in Hailey, Idaho. Photo: Michael Mathewson

[Episcopal News Service] In case anyone needed further evidence of how bad the wildfires are that are burning around Hailey, Ketchum and Sun Valley in Idaho, the number of people attending Sunday Eucharist at St. Thomas Episcopal Church in Ketchum was a sure sign.

While the resort town parish normally welcomes about 230 worshippers on a Sunday this time of year, only 60 came to church on Aug. 18.

“That tells me that over half of our congregation has been evacuated or decided to leave because of the smoke,” the Rev. Ken Brannon, St. Thomas’ rector, told Episcopal News Service, via phone on Aug. 19.

Brannon said the service on Aug. 18 was different due to the small number of people who attended and the fact that there was no music because it was not clear if the music director would be able to stay “and many in the choir had evacuated”

“It was still the liturgy – it was what we always do – but there was a lot more space for silence and kind spontaneous prayer at the Prayers of the People,” he said.

Brannon, who said that St. Thomas often functions as the “village church” in Ketchum, added he wrote his sermon with the entire community in mind, not just the members of the parish.

“When I saw the opening line of the gospel earlier this week, I wasn’t sure whether to laugh or cry,” he began. “Luke writes, ‘Jesus said, “I came to bring fire to the earth, and how I wish it were already kindled!”’

“Well, Jesus,” Brannon said to scattered laughter. “We’ve had enough of fire for one week.”

Brannon told Ketchum that “we are not a church that believes that God sends natural disasters to punish people” or that “if we pray hard enough, the winds will shift or the rains will come or the firefighters will become superhuman.” 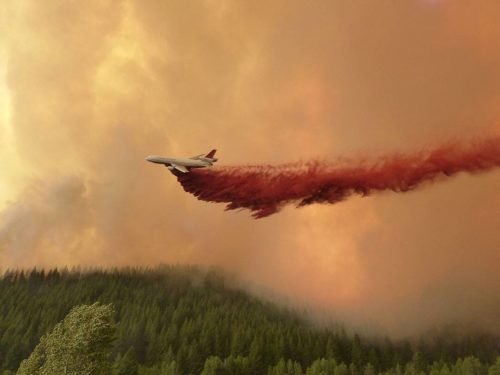 “We are not a church that expects God to alter nature,” he said. “We are a church that believes that God alters us so that we can cope with whatever nature throws at us.”

Although some pre-evacuation warnings were lifted Aug. 20, including Brannon’s part of Ketchum, they still exist in other parts of town. People living north and south of Ketchum are still under a mandatory evacuation order, he reported in an e-mail to ENS.

He and many in the congregation have had to have a “go bag” packed to take when and if they are ordered to leave.

“That’s very much a spiritual exercise,” he said. “I think everybody at some point should have to pack as if they’re leaving their house and are not going to return. That’s been one of the most fascinating discussions around the church is what did you pack and why and what does it mean to you.”

It’s those mandatory orders, and the fear that all residents of the three towns might face such orders, that prompted the Diocese of Idaho to issue a call Aug. 19 for volunteers to potentially open their homes to evacuees.

“There is uncertainty about how broad this need will be, or for how long people will need assistance, but we would like to be prepared in case the situation changes quickly,” the diocese said in an e-mail sent to diocesan members just before noon local time. 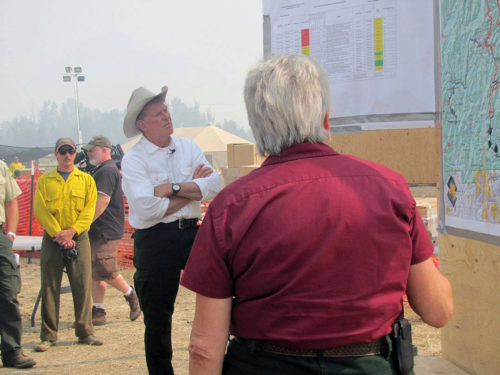 The e-mail noted that as the mandatory evacuations have increased, hotels between Boise, Idaho, and Salt lake City, Utah, – a distance of about 340 miles – are either full or filling up fast. The request came with a link to a page on which volunteers could register and indicate how many adults and children they could house and whether they could accommodate pets and people with medical needs. The registration also asks volunteers to indicate if they have taken the church’s Safeguarding God’s Children training.

The Rev. Lucinda Ashby, canon to the ordinary in the Diocese of Idaho, said the volunteer-registration system enables the rectors of the affected parishes to send people on their way with a single phone call. “Evacuees can be welcomed and tended to by people who expect them and can call them by name,” she told ENS in an Aug. 19 e-mail. “The response and hospitality offered by people around the diocese was immediate. People want to be helpful, and we wanted to find a way to make that desire to be helpful be effective.”

Close to 1,800 firefighters and other personnel from all over the United States are fighting what is called the Beaver Creek fire, which was started by lightning on Aug. 7. The fire covers about 104,500 acres in what the Sawtooth National Forest’s update calls “extreme terrain.” The Great Basin National Type 1 Incident Management Team took command of the firefighting effort on Aug. 11 and the fire is now reported to be the top priority in the country. Fighting the fire has cost $11.6 million thus far, according to the latest national situation report from the National Interagency Fire Center. 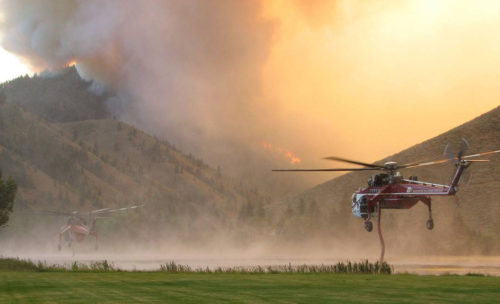 Firefighters made progress on the flames on Aug. 19 – thus prompting the lifting of some mandatory and pre-evacuation orders. However, fire meteorologists had good and bad news in their latest forecast. The area should see lower temperatures and higher humidity on Aug. 20, which will tend to dampen down fires. But there is an increasing chance of thunderstorms later in the day and on Aug. 21, which “can produce erratic and gusty winds, which can lead to extreme fire behavior.” And, while rain will help firefighters, too much rain could cause extreme run-off from burned-over areas and flooding.

“As of right now, all parishioners are safe and accounted for, and for that we are extremely grateful,” Ashby told ENS.

The Rev. Shawn Carty, rector of Emmanuel Episcopal Church in Hailey, told ENS via e-mail that member of about 12 parish families that have been evacuated from their homes, others have left as a precaution and some have been able to return to their homes.

Ashby said Carty told her that residents of Hailey who live in the gulch areas and on the west side of the Wood River Valley were under mandatory evacuation, and many had to leave in the middle of the night.

“Everyone in the valley is doing their best to cope with the heavy smoke from the fires and the anxiety and uncertainty from the situation,” Carty said.

Emmanuel’s members are connected to the local community and most have deep roots in the area, according to Ashby.

“Several parishioners have served with the Department of Forestry, and they tend to view the fire as part of a natural progression in the natural cycle of the area,” she said.

Carty told Ashby that watching the fire make a huge run on Aug. 16 was “like being in the middle of a war zone.”

That evening, Emmanuel held a prayer service in their historic building.

“We have been overwhelmed by the number of people offering help and keeping us in their prayers,” Carty said, including the diocesan housing effort.

“We know we are not alone in this situation. I have often said that in the church, it’s not ‘six degrees of separation’ but rather two – the connections God makes among us are much closer,” he said. “So many people from around the country have e-mailed or called to let us know they are thinking of us and praying for us, and we are grateful beyond words.”

Brannon echoed Carty’s sentiments, adding that “we continue to be amazed by what firefighters are capable of.”