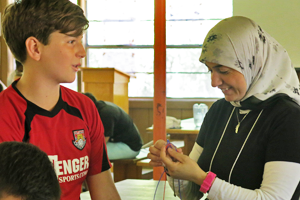 Kids from Israel and the U.S. gathered at Camp Allen to learn about each other’s cultures and faith. Photo: Luke Blount

[Diocese of Texas] Last summer, interfaith groups of 12-year-olds from the U.S. and Israel gathered to learn about different faiths and cultures. This year, they met again atCamp Allen with Kid4Peace, a program dedicated to “encouraging children of different cultures and faith traditions to explore their differences and similarities, and to learn understanding, tolerance and respect, while fostering sustainable friendships across the lines of conflict.”

Eighteen second-year campers from Houston, Vermont, Boston and North Carolina gathered with 23 campers from Jerusalem at Camp Allen for Kids4Peace’s first ever second-year camp. The kids were joined by six counselors, 16- and 17-year-olds who had been campers at age 12 as well.

“This year everyone is mixed up with each other,” said the Rev. Josh Thomas, executive director. “Jews, Muslims, Christians, from the U.S. and Israel – you can tell their relationships are growing stronger.”

The children participate in advanced cultural trainings that most adults could also benefit from. They take part in each religion’s sacred practices, learning the meaning and history behind each tradition. Additionally, they confront complex ideas in regards to identity, stereotyping and equality. Often times, the kids discover as much about themselves and their own religion as they do about each other’s.

Reeham Subhi is the Kids4Peace Director from Jerusalem. She says the effects of Kids4Peace in Jerusalem are amazing. “I’m so proud of them because they help each other and care for each other,” she said.

Subhi described an occasion when she discovered some of the Jewish kids visited the Muslim kids at their home in an Arab neighborhood, something almost never seen. “It was so amazing that they decided to have no fear and decided to be together,” Subhi said. She notes that often the children’s parents are confronted with their own stereotypes of the other side. “It changes not only the kids, but the parents,” she said. “These are just a few small things, but one day it will be big things.”

After this week, the kids will return to their homes with the opportunity to participate in more events and community building. Kids4Peace holds a voluntary leadership camp for 15- and16-year-olds, and then continues to hold meetings between the Kids4Peace as they grow up together.  Leadership camp graduates will qualify as counselors and mentors for younger kids, hoping to foster continuous lines of peace.