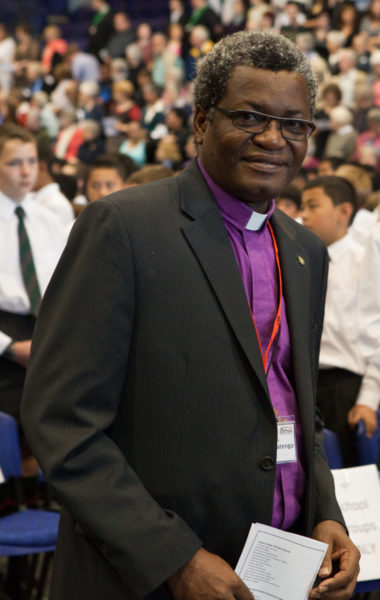 [Episcopal News Service] Dartmouth College in Hanover, New Hampshire, has withdrawn the appointment of former Southern Malawi Bishop James Tengatenga as dean of its Tucker Foundation saying that his past comments about homosexuality “have compromised his ability to serve effectively.”

Meanwhile, some North American church leaders are surprised and saddened by the decision, saying that they know Tengatenga as a bridge-builder and reconciler who has a deep understanding of the complex issues concerning human sexuality.

Tengatenga, a long-standing member and current chair of the Anglican Consultative Council (ACC), the Anglican Communion’s main policy-making body, announced in mid-July that after 15 years as bishop of Southern Malawi he was tendering his resignation to become the Virginia Rice Kelsey Dean of the William Jewett Tucker Foundation at Dartmouth College from Jan. 1, 2014.

After some members of the Dartmouth community and other groups expressed concerns about Tengatenga’s appointment, Philip J. Hanlon, college president, said in an Aug. 14 statement that he felt it was important for him to meet with the bishop and ask “tough questions about his earlier statements on homosexuality” and “his leadership within an Anglican Church in Africa that has often been hostile regarding gay rights.”

It was not clear to which earlier statements Hanlon was referring, but in an Aug. 15 e-mail to Episcopal News Service, Tengatenga said those protesting his appointment “have used selectively what I said in 2004” when he was quoted as opposing the election and ordination of the Rt. Rev. Gene Robinson as the first openly gay bishop in the Anglican Communion. Tengatenga has said that his understanding of human sexuality has since evolved and that he now considers all people equal regardless of their sexual orientation.

Tengatenga, who was elected as ACC chair in 2009, and also became chair of the Anglican Communion Standing Committee, told ENS on Aug. 15 that he is “saddened” by Dartmouth’s decision. “They have chosen to trust bigotry over truth and justice.”

He said that the college has yet to inform him formally of their decision but that once they do he intends to seek legal counsel.

One of the groups that countersigned the protest is the National Association for the Advancement of Colored People. “Of all the groups to take the lead against a black person on flimsy grounds,” Tengatenga said. “So much for the advancement of colored people … It is sad that such an institution can stoop so low.”

Connecticut Bishop Ian Douglas has known Tengatenga for close to two decades in a variety of capacities across the Anglican Communion, most recently in his leadership of the Anglican Consultative Council.

“James is fundamentally committed to the belief that differences are a gift from God and we are at our God-given best when we come together to serve God’s mission of restoration and reconciliation,” said Douglas, who serves on the Anglican Communion Standing Committee alongside Tengatenga. “I am deeply saddened that Dartmouth has turned its back on such a fine Christian leader who has demonstrated over and over again the inclusive love of God in Christ.”

Bishop Michael Ingham, whose Diocese of New Westminster in Canada has been blessing same-sex relationships since 2002, wrote to Hanlon saying that he believes the decision to withdraw Tengatenga’s appointment “to be quite wrong … He is an African first, proud of his roots and culture, but also widely travelled, scholarly, wise, and sophisticated in his grasp of the complex realities of justice. He has a far greater understanding of how to bridge cultural differences towards the goal of reconciliation than most of us in North America.”

Tengatenga recently visited the New Westminster diocese as the keynote speaker for its annual convention. He “came here to build bridges between Africa and Canada on the contentious matter of homosexuality,” wrote Ingham. “He received three standing ovations. Mr. President, I can assure you no one with homophobic opinions would have received such a welcome here. His wisdom, humor, intelligence, and grace far transcends the narrow confines of a single issue.”

Dartmouth, Ingham said, “has lost an extraordinary opportunity to forge a relationship with Africa through one of its outstanding intellectual leaders.”

New Hampshire Bishop Rob Hirschfeld said he had been eager to welcome Tengatenga as a brother bishop to his diocese.

“As Christians, our posture is one of hospitality; that’s how we are called to be,” he wrote in an e-mail to ENS. “I also recognize that it was a bold appointment considering how politically charged American colleges tend to be. As an alumnus, I have some familiarity of the climate at Dartmouth. Bishop James’s effectiveness, despite his conciliatory work in the Anglican Communion and his powerful statements of openness and support of the LBGTQ community, would also have been complicated by the apparent indefinite role of the Tucker Foundation.

“If the Dartmouth College decision took place within the councils of the church, I think we would have benefited from some holy conversation that would have led to a deepening of communion and reconciliation. I would welcome that. We see that such a conversation is probably not what the college administration bargained for in filling this vacancy, so the revoking of the appointment is sad, but understandable. I pray that some healthy reflection will proceed out of this whole event.”

Hanlon said that in his meeting with Tengatenga, the bishop spoke about his “inspiring life of service to some of the world’s most vulnerable people, especially victims of HIV-AIDS [and] … his commitment to gay rights and how he has worked to support the LGBTQ community in Malawi in the ways that are most effective, given the country’s cultural context.”

But after “much reflection and consultation” with senior leaders at Dartmouth, Hanlon said it had become clear that Tengatenga’s past comments about homosexuality “and the uncertainty and controversy they created have compromised his ability to serve effectively as dean of Tucker.”

Tengatenga had issued a statement on July 18 saying that he supports marriage equality and equal rights for everyone.

“Let me state unequivocally and categorically that I consider all people equal regardless of their sexual orientation,” said Tengatenga. “The dignity of all should be honored and respected. As is the case with many people, my ideas about homosexuality have evolved over time. I’m not ashamed to say that, but I also think I’m not alone…”

Tengatenga said he felt it was important to offer some historical context and noted that the changing attitudes on human sexuality, especially in the United States, “have been staggering. The 2003 consecration of V. Gene Robinson as Episcopal bishop of New Hampshire represented an extraordinary gift because it forced people — from parishioners to bishops to people outside the church — to think carefully and critically about the issue of homosexuality and gay rights. As a result, many of us came to very different understandings of the faith and the gospel.”

“So, let me be clear. I support marriage equality and equal rights for everyone, and I look forward to working with everyone at Dartmouth—everyone. I believe that discrimination of any kind is sinful. When I say that I am committed to the human rights of all, I mean all.”

But Tengatenga’s statement was not enough to allay concerns and Hanlon concluded that “the foundation and Dartmouth’s commitment to inclusion are too important to be mired in discord over this appointment. Consequently, we have decided not to move forward with the appointment of Dr. Tengatenga as dean of the Tucker Foundation.”

Dartmouth will now develop plans for interim leadership at Tucker and convene a task force charged with making recommendations as to the foundation’s mission and organizational structure. On its website, the foundation says, it “educates Dartmouth students for lives of purpose and ethical leadership, rooted in service, spirituality, and social justice.”

Tengatenga has said that he is not withdrawing his resignation as bishop of Southern Malawi but that he has not decided what he will do next. “It is in the Lord’s hands,” he told ENS.