[Episcopal News Service] This is the story of two congregations, two languages and one teen who helped bring them together to launch a new ministry.

Seventeen-year-old Hannah Kraft of Morristown, New Jersey, loves Spanish. Two years ago, she took a Spanish-immersion course in Costa Rica. Last summer, she attended “a really rigorous program” in California. When she returned, she said, “I wanted to maintain the Spanish that I had learned.”

So Kraft joined the teen Bible study at Principe de Paz, a nondenominational congregation of mostly Guatemalans and Hondurans that for three years has rented worship space at her parish, St. Peter’s Episcopal Church in Morristown. She hoped to keep up her language skills, plus she was curious.

“They were always this sort of mysterious church that came in,” she said. “I wanted to know who they were and what they were really up to.”

Kraft discovered a group of teens very serious about their faith and more comfortable sharing it publicly than those in the St. Peter’s youth group.

“These kids were so different; they really liked talking about how they felt,” Kraft said. “They’re very serious about their beliefs. They’re not messing around.”

“The kids are really sweet and down-to-earth,” she said. “It was scary speaking Spanish in front of them.” The teacher, Lesly Zuluaga, would “just call on people, so you really had to participate. She broke the barrier.”

Kraft hoped she might help some of the other students with English but learned they all spoke English well. Some of their parents, however, needed help. So she and Zuluaga launched a Friday-evening class teaching English as a second language, beginning with five adults. They adapted the curriculum to meet the needs of their students – some of whom were illiterate – and focused on practical language skills such as identifying yourself, writing your address, providing insurance numbers.

More and more students started coming, as many as 30 in a class. Kraft helped run a training class for 30 members of St. Peter’s, where her mother, the Rev. Janet Broderick, is rector. A handful joined the program as tutors.

“The relationship with Principe de Paz got tighter and tighter. Eventually we said, ‘What do we want to do for the summer?’” Kraft said. The adult students wished for a place for their children to go during the summer, since they couldn’t afford to send them to local day camps.

Leaders of the two congregations met to discuss the idea, and the St. Peter’s bilingual vacation Bible camp was born.

“We came up with the idea that it would be a nice way to help the community, especially the low-income families in the Hispanic community,” said Zuluaga, one of the camp organizers. “We thought this would be a great idea to have the kids learn and at the same time be part of a social group instead of being at home.”

St. Peter’s received a $20,000 grant from the Simon Foundation and another $2,000 from the F.M. Kirby Foundation. The church hosted a camp plus before and after care for nearly 50 children each weekday from July 8-Aug. 2. An additional $5,000 Simon challenge grant provided three day trips a week during the first two weeks in August, said camp Director Dee Klikier, St. Peter’s facilities manager and a former elementary school principal.

About three-quarters of the kindergarten through seventh-grade campers came from Principe de Paz families, she said. Others learned by word of mouth or saw the sign, including one Jersey City resident who works in Morristown. “It’s been quite a godsend for her.” 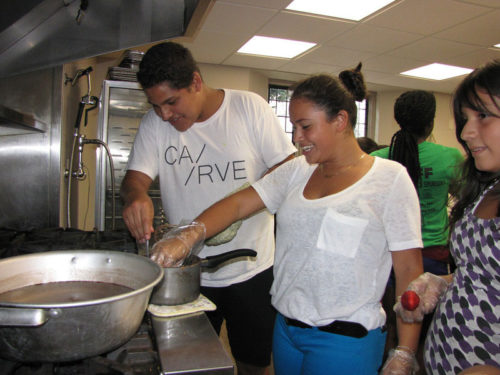 “They make everything fun,” she said. “There’s nothing boring in this camp. There’s always a smile on everyone’s faces.”

“It’s been like coming to a new world,” said Gabriela Argueta, 9. She liked chapel best “because we learn new songs and we learn that God is a wonderful person to meet.”

“I’ve made a lot of new friends and I’ve gotten to know a lot of the kids really well,” said Alaina Boccino, a St. Peter’s youth group member who volunteered at the camp. “Mixing the groups, it’s been a lot of fun.”

Principe de Paz member Julio Monzon, 16, said he also enjoyed meeting new people and that working as a counselor with sixth- and seventh-graders was “amazing.”

“You learn from them and you get a lot from them,” he said. “You learn that you are patient and that you actually love kids.”

Some children attended on full or partial scholarship, and all parents were asked to volunteer three hours, Klikier said. On Thursday evenings, camp families and St. Peter’s members were invited to share a meal in the parish hall, where the children sang songs and displayed the week’s artwork.

“I think that it has just continued to strengthen the relationship between St. Peter’s and Principe de Paz,” Klikier said. “We’re two very different churches.” But for both, she said, “Jesus is at the core of it all.”

Klikier said she hoped the trust built through the camp would allow for more mutual ministry in the future. And she thinks the Principe de Paz members now feel more at home at St. Peter’s, she said. “They don’t feel like renters any more; they really feel like much more a part of things.”

Said Zuluaga, “It has created relationships for me that I know will be lasting relationships, as well as for the kids. They will know there is a place where they can come and feel welcome.”