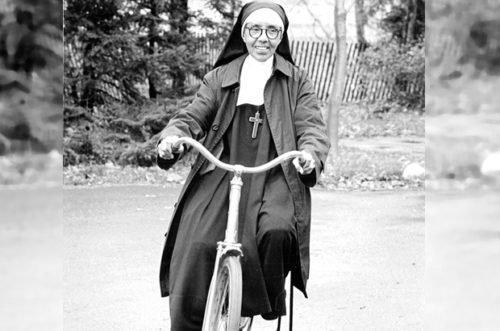 [Anglican Journal] Sister Constance Elizabeth Murphy, the oldest nun at the Sisters of St. John the Divine (SSJD) convent in Toronto died peacefully on Aug. 2, 2013, after a long life of devoted service, both as a teacher to the young and as a minister and advocate for the elderly. She was 109.

Sr. Constance was born in Baltimore, Maryland, in 1904 into a family of high achievers. One of her grandfathers was editor of the Afro-American newspaper, which he founded in 1892, and is still in operation today. In 1928, Sr. Constance earned an education degree from the University of Pennsylvania and taught school in Baltimore until 1932.

She travelled to Toronto to enter the SSJD convent in 1933, in part because her family was against the idea of her becoming a nun. She became a sister in 1936, then went on to be a teacher, first in special education in Aurora, Ontaro, and then at the Qu’Appelle Diocesan School in Regina, where she eventually became head mistress.

Sr. Beryl Stone of SSJD came to the school during those years as a 13-year-old girl. When she arrived, Sr. Constance was the first sister she saw. “She was in motion, hurrying somewhere, with her arms full of books and papers,” Sr. Beryl recalls, adding that she felt drawn to her from the start. Sr. Constance taught a broad range of subjects, such as algebra, geometry, scripture, history and literature, including Kipling and Shakespeare. Sr. Beryl, who later became a teacher at the school, said she was influenced by Sr. Constance’s methods and approaches to subjects.

Their paths crossed again when Sr. Beryl came to SSJD as an uncertain and anxious novice. At that time, the sisters were not allowed to converse with the novices. But when they saw each other, “Sr. Constance would give me a smile that said, ‘This is great what we’re doing…’ It sort of gave me confidence and a share of her purpose, which was rolling on,” Sr. Beryl told the Journal. “As a sister, I had to find my own way,” she said, but “I’m sure she laid down many of the ways that I followed.”

She added that while Sr. Constance might have seemed like a very serious person, “She was playful. She loved games.”

In 1958, Sr. Constance began a new ministry when she was posted to the Church Home for the Aged in Toronto, where she served until 1972.  She also served as chapel co-ordinator at the Castleview Wychwood Towers home for the aged in Toronto; as chair person for the diocese of Toronto committee on the elderly, and later, as diocesan co-ordinator, volunteer and pastoral visitor at St. Hilda’s Towers, a retirement residence. When she was 72 years old, she decided to get her master’s in adult education with a certificate in gerontology from the University of Michigan

Sr. Elizabeth Ann Eckert of SSJD describes her as “a woman of incredible energy, going from morning to night…She was a woman who was always wanting to do for others, so she’d be going to visit the elderly and making things to take with her, cutting out poems or helpful words, things that she could give away to people that they would find helpful.” Sr. Elizabeth added that when Sr. Constance was 98 or 99, she fell and broke her heel. She was “rather cross” afterward when Sr. Elizabeth, as the sister in charge of the house, had to insist that she let someone drive her to her destination or at least to the subway instead of going on her own, alone.

When she celebrated her 105th birthday, U.S. President Barack Obama sent her a congratulatory letter. Although Sr. Constance didn’t focus on issues of race, Sr. Elizabeth Ann recalled that “she was so pleased on [Obama’s] election. It was something that she and we never thought possible in her lifetime. If there was any sort of black pride in her, it came out just then.”

The Rev. Canon Derwyn Shea, rector at St. Hilda’s Towers in Toronto, said she got to know all the residents and continued to visit and minister to everybody until she was too physically weak to continue. “She was a jewel. She was always giving, always caring, always selfless,” he said, following an Aug. 7 Eucharist service at the residence celebrating her life. “She understood aging. She understood the challenges in our society of ageism and was very impatient with it and very outspoken.”

In a 1977 interview with the Anglican Journal’s predecessor the Canadian Churchman, Sr. Constance spoke about the importance of seniors staying active —physically, mentally and spiritually. “They must use their strength to fight the picture that an elderly person is a non-person…the elderly should use all that they have gained through experience. Second or even third careers can be taken by old people, through volunteer work or through higher education.”

Shea added that Sr. Constance was “a true advocate for living life to the fullest for as long as one lives until God calls us home.” But in recent years, Shea said, she sometimes wondered why God hadn’t called her home yet. “She really was quite ready for the Communion of Saints,” he said.

Sr. Constance was installed as a canon of St. James Cathedral in Toronto in 2004. Her funeral service will be held there on Saturday, Aug. 10 at 10:30 a.m. Archbishop Colin Johnson will be the celebrant and the Rev. Bill Whitlaw of Holy Trinity, Eaton Square will be the homilist.