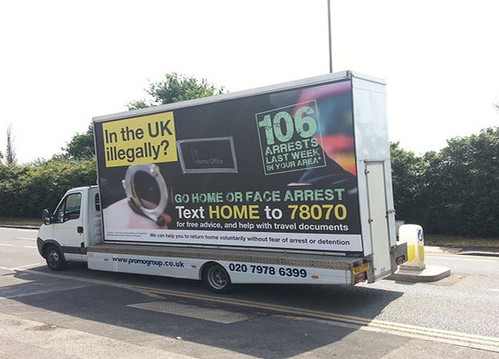 [Religion News Service — Canterbury, England] Two bishops — one Anglican, the other Roman Catholic — condemned a British government billboard and stop-and-search campaign aimed at picking up illegal immigrants and deporting them.

Bishop Nick Baines, the Anglican leader of Bradford in northern England, derided the Ministry of Home Affairs’ controversial “go home” bus and van campaign and described it as divisive and ineffective.

Bishop Patrick Lynch, one of the Roman Catholic Church’s authorities on immigration, said the government’s billboard campaign targeting illegal immigrants in several London boroughs left the impression all immigrants and foreigners are unwelcome in England.

Earlier this month, bus and van ads appeared across London with the slogan: “Go home or face arrest.” The Ministry of Home Affairs paid for the ads.

“These cases need to be dealt with compassionately, especially when there are children involved,” Lynch told The Catholic Herald.

Sarah Teather, a Catholic member of Parliament, suggested the announcements are designed to make the government look tough on immigration.

With unemployment hovering at 7.8 percent, some Parliament members and human rights workers say the government’s campaign could stoke ethnic tensions.

Prime Minister David Cameron has made curbing illegal immigration a priority but faces calls to reassess the way government is measuring it. A recent report by a gqovernment watchdog committee said the current system was “ little better than a best guess.”

There are an estimated 570,000 illegal immigrants in Britain, many from Africa but also from eastern Europe.