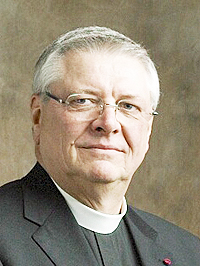 Bishop Lambert was introduced June 20 during the Brotherhood’s National Council meeting at the Hilton Garden Inn near Dallas-Fort Worth International Airport.

“We’re honored Bishop Lambert will be our spiritual leader,” Brotherhood President Robert Dennis said. The Brotherhood of St. Andrew has more than 4,000 members in 390 Episcopal and Anglican churches in the U.S. and thousands more worldwide. “I’m looking forward to working with him to further the Brotherhood’s goal of bringing men and youth to Jesus Christ.”

“Always remember your story,” Bishop Lambert told Brothers, who are dedicated to bringing Jesus Christ to men and boys. “If you do that, nothing can stop the Brotherhood. Remember – Jesus started with just 12 men.”

The new Brotherhood chaplain was elected the seventh Bishop Suffragan of the Episcopal Diocese of Dallas March 29, 2008 at The Cathedral of St. Matthew’s in Dallas. For the previous six years he was Canon to the Ordinary under Bishop James M Stanton. For 15 prior years he was rector of St. James’ Episcopal Church in Texarkana, Texas.

A Reno, Nevada native, Paul Lambert attended Nashotah House Theological Seminary where he graduated with a Masters of Divinity in May of 1975. Two days later he married Sally Lynne Nicholls before moving to his first Cure at St. Paul’s Episcopal Church in Modesto, California and St. Matthias’ Episcopal Church in Oakdale, California. Their twin daughters Claire Marie and Rebecca Anne were born in 1976. The family then moved to Taft, California where Lambert served as Vicar of St. Andrew’s Episcopal Church. Two years later, he was called as a Curate at the Episcopal Church of the Transfiguration in Dallas.

Bishop Lambert and Sally have three children: Claire and Rebecca, 36, and Megan Elizabeth who graduated from the University of the South, Sewanee, Tennessee . They have four grandchildren, two boys and two girls.

He succeeds Bishop Keith Whitmore of the Episcopal Diocese of Atlanta.