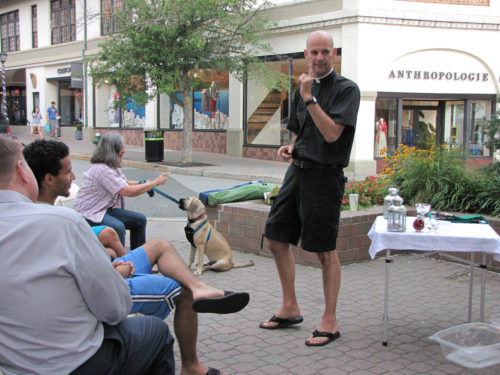 The Rev. John Mennell speaks to worshipers July 28 at the corner of Church Street and South Fullerton in Montclair, New Jersey, during Worship Without Walls. Photo:Sharon Sheridan/Episcopal News Service

[Episcopal News Service] Wearing a traditional black clerical shirt and collar, and less- traditional black shorts and sandals, the Rev. John Mennell sits near a portable altar, waiting for stragglers. About a dozen people — one with a leashed dog named Gideon at her feet — sit facing him in two rows of folding chairs. Backed by the sounds of diners chatting outside a nearby eatery and passing vehicular traffic, Mennell rises and greets worshipers at the corner of Church Street and South Fullerton in Montclair, New Jersey, to the July 28 Worship Without Walls.

From the weekends of Memorial Day through Labor Day, St. Luke’s Episcopal Church in Montclair is holding 5:00 p.m. Sunday Eucharists in public, outdoor spaces.  Similar to “flash mobs,” participants are alerted to the location each week via text message. Passersby are encouraged to join.

“It’s fun to see different people’s reactions,” said Mennell, the church’s rector. “Last week, we ended up in the park in a walkway. … This one woman walked through with her dog, and her dog desperately wanted to join in the service.”

When the woman walked through a second time, Mennell invited her to join them. “She politely informed me how the dog leads her to the temple each Saturday.”

Such invitations, accepted or not, are among the points of Worship Without Walls, Mennell said. “Part of it is getting people used to inviting people in in ways that are uncomfortable.”

“In our beautiful Episcopal reticence,” he said, churchgoers don’t stand on street corners talking about Jesus. “This is about as close as people comfortably get.”

“If I told my congregation, ‘Go out on a street corner and witness,’ they’d run me out on a rail,” he said. But worshiping together publicly, “it’s really doing the same thing.”

On this particular Sunday, nearly 20 people ultimately joined the service, with a few passersby stopping briefly to check things out.

“As people come by and look curious, invite them into what we’re doing,” Mennell instructed the congregation. “We will sort of go with the flow.”

Mitch Goodrich was running an errand in town when he stopped and joined the service with his sons Henry, 8, and Calvin, 19 months. Turns out, he knew Mennell years ago at Church of the Redeemer in Cincinnati, before the Montclair priest attended seminary.

“This is fantastic. It’s so good to get out and let people see what’s going on and see who you are,” Goodrich said. “We need to do more of this in the Episcopal Church.”

One man in a baseball cap interjected comments several times during the service. Listening to the Old Testament reading on Abraham bargaining with God about the fate of Sodom, he announced: “We’re doomed.”

Later, during the sermon, the priest asked the congregation what stopped them from praying.

One woman replied that her concerns are “too small and insignificant.”

“Alcohol and chicks,” said the man in the cap.

“Satan,” added the man in the cap.

“Jesus has power over Satan,” said Mennell, spurring a brief dialogue over this theological point.

Such engagement, if sometimes challenging, is not unwelcomed.

“Part of breaking down walls [is] we can’t use the walls of the church as a barrier to keep people out and keep ideas out,” Mennell said later.

For the first time that summer, weather interrupted the service. With the onset of a rainstorm, the worshipers brought the prayers of the people to a speedy conclusion. Then about half of them headed to a nearby diner to conclude the service and eat together. They ordered food, then completed the Eucharist.

Worship Without Walls recently prayed near the intersection of Bloomfield and Mission Streets, the scene of two Montclair shootings. Photo: St. Luke’s, Montclair.

At the peace, besides greeting each other, they followed an extra ritual: pulling out their cell phones and texting “Peace be with you” to someone. The offering, as always, went to a local organization, this time Montclair Conversations on Race. Another week, the congregation worshiped near where two shootings had occurred. Worshipers prayed for an end to gun violence and designated the collection to CeasefireNJ, an anti-gun effort.

Often the group will follow worship with a meal, Mennell said. “It’s a fun way to continue the fellowship.”

That night’s dinner conversation ranged from an explanation of what “catholic” means to the spiritual journeys of young people. St. Luke’s member Michelle Cruz, a recent college graduate, discussed how what she had learned through science confirmed her faith. “It is so complicated,” she said. “I don’t think it could have come up by itself.”

Attending her first Worship Without Walls with her father, Felix, she said she appreciated being outside.

“Texting’s cool,” she added. “I texted one of my sorority sisters. She’s a Silesian Catholic.”

Elsie Lockett also attended for the first time. “I like it. It’s different, and it makes it less structured,” she said.

The Rev. Joseph Harmon, rector of Christ Episcopal Church in East Orange, attended the July 28 service with an eye toward starting a similar ministry with his congregation. “We’ve been discussing how Christ Church can become a more missional church and in particular how we can engage the East Orange community more effectively,” he said.

Len Roberts, a regular Worship Without Walls participant, said he thought that’s just what St. Luke’s was doing in Montclair. Taking the Eucharist out into the community lets people know that the power of Christ is in the community, “not just in church,” he said.

St. Luke’s is one of multiple Episcopal churches within several miles and is reaching out to some of them to join in a nearby Worship Without Walls. Worshipers from Christ Church, a mile and a half away in Bloomfield and Glen Ridge, joined St. Luke’s for one service.

“One of the points is breaking down all of these different barriers that we have as we come together in Jesus’ name, and it was really fun to come together with another Episcopal community,” Mennell said. “We sang the same songs and said the same words. There’s no service leaflet to this. It’s a really powerful thing to see what we all know and do and share together, almost as powerful as inviting people into what we’re doing.”

“What I would love this to become is a different model of doing church,” Mennell said. “We’ve got the best thing in the world to offer. We need to get better at giving it away.”

To sign up to receive a text message with the location of upcoming Worship Without Walls services, text “stlukesmtc” to 41411.