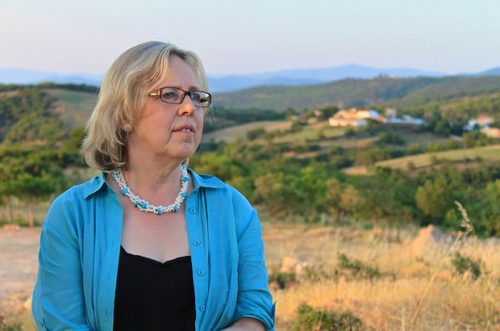 “Being a Christian in politics is part of who I am as a person, so I don’t hide it,” says Green Party leader Elizabeth May, who is a parishioner at St. Andrew’s Anglican church in Sidney, B.C. Photo: Green Party of Canada

[Anglican Journal] At a time — at least in Canada — when having an active faith is considered a liability for politicians, Elizabeth May stands out for being openly Anglican.

May, leader of the Green Party of Canada, is known for environmental activism as equally as she is for declaring her faith.

“In the U.S., if you’re a not out-of-the-closet practicing Christian, you almost have no chance of being elected,” says May with a laugh in an interview. “It’s the opposite in Canada. I get flak for being a Christian.”

And so she finds herself having to stress over and over again that her party is a secular organization that welcomes supporters “of all faiths and of no faith.”

But even if she has found herself in tight corners — like being confronted by angry Canadians who object to her wearing the Celtic cross given to her by her late mother — May says that her faith is such an important part of her life that she remains unfazed. “It’s the source of my strength in dealing with somewhat insurmountable odds — this profound belief that the impossible is possible.”

Wearing her faith on her sleeve, May believes, is also a matter of honesty and transparency. “I’m not trying to impose a religious agenda…Being a Christian in politics is part of who I am as a person, so I don’t hide it.”

May came to her faith “sort of on my own.” Born in Connecticut in 1954 to a British father and an American mother, May and her family didn’t attend church regularly. She was a toddler when her mother left an Episcopalian church after a falling out with the minister, who refused to circulate one of her petitions to end nuclear weapons testing. They attended some Quaker meetings, but when they met refusal of “some other worthy request,” off they went again. “So we ended up having kind of a general knowledge of Christianity in the family,” recalls May.

At 13, May decided she wanted to become Episcopalian. But that was only after she dropped the idea of becoming Jewish. “A friend of mine was Jewish and was going to have her Bat Mitzvah, and her father was a rabbi who was a very close friend of my mother through the peace movement. I thought I should just become Jewish,” recalls May. She made an appointment with the rabbi, who patiently quizzed her on her religious beliefs.  He came to the conclusion that while she was welcome in his community, he thought she had formed “a much closer relationship with Jesus Christ than you think you have and you will miss it.”

May followed his advice to call the Episcopal church closest to home, and coincidentally, they had confirmation classes for her age.  Shortly after confirmation, May volunteered as a Sunday school teacher, and so began her faith journey that continued even after her family moved to Nova Scotia when she was 18.

“I’m very comfortable in the Anglican church. The element of it that I appreciate the most would apply to many Protestant churches — inclusiveness, tolerance,” she says. “I’m certainly pleased that we have women priests, that we have blessings of same-sex marriages.” While the church can always do more, May adds that she feels proud when it comes out front on issues such as Indian residential schools and climate change.

May also finds “tremendous joy” in parish life, so much so that before she entered politics, she studied to become a priest. She was halfway through her theological studies at Saint Paul University, in Ottawa, but had to abandon them as the demands of being leader of an emerging party grew.

In 2011, May made history by becoming the first Green Party candidate to be elected to the House of Commons. “Foolishly, I thought I could start taking courses again,” she says. But the job of trying to effect change in Parliament has been a full-time one and could take at least a decade or more, says May. “I think I’d be very much too old. I was at the borderline anyway,” she laughs. “It’s been a good experience studying theology and I would love to do it again just out of interest.”

But May says she could be anywhere across Canada or around the world, and know that she can attend any Anglican parish. “I enjoy the Sundays when we use the BCP [Book of Common Prayer] because it reminds me of my childhood and I love the language. But I really think the BAS [Book of Alternative Services] is wonderful,” says May. “I appreciate the ways in which the church is evolving in the modern world.”

The Anglican Church is going through tough times as congregations and finances dwindle, but May remains hopeful. It can only be good for organized religion “to have to go through some difficult times, so that we actually are not the comfortable pew, the status church, but actually rebuild ourselves [as we consider] what’s the point here?” she says. “What are we challenged to do in the world in a time of climate crisis, a time of suffering and poverty?” If the church is not about making a difference in the world, “then we’ve abandoned Christ’s purpose for us on earth,” she adds.

A few of the people whose work May says have greatly influenced her faith and worldview include Thomas Berry, the late Catholic priest and eco theologian; Matthew Fox, American priest and theologian; and Brian Swimme, mathematical cosmologist. Berry, says May, expounds on the notion that “it is important for us to see ourselves…in an evolutionary context as being co-creators in this quite mysterious creation where God’s hands and our hands can be working together.”

May, herself an author of seven books, has also been inspired by the spiritual writings of the Dalai Lama and by Buddhist writer Pema Chödrön, resident and teacher of Gampo Abbey on Cape Breton Island.

“I don’t exclusively read Christian text,” she adds, citing how Karen Armstrong’s books A History of God and The Battle for God have helped her to understand the modern context around fundamentalism, whether Christian, Islamic or Jewish.

May says she wishes there were more “out-of-the-closet Christian left people,” because the Christian right is where most people identify in the political context.

“I’m very comfortable with being what I think of as a progressive person who embraces science, who understands evolution, supports a woman’s right to choose, all of these issues,” she says.
These days when she’s at a service, May says she latches on “more than anything else” to a phrase in the doxology recited by Anglicans, taken from Ephesians 3:20: “…God’s power working in us can infinitely do more than we can ask or imagine.”

May says that is “a profoundly empowering, hopeful message, because if we deal only with those things that we can ask or imagine in our current knowledge-based, secular economic sense, then our kids don’t have any future.”