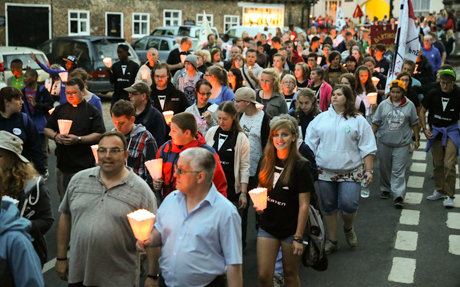 [Lambeth Palace] Archbishop of Canterbury Justin Welby told young Christians this week that while it is “easy to feel very alone,” they are part of “a community” which will strengthen them to change the world.

The archbishop was visiting the Anglo-Catholic Shrine of Our Lady of Walsingham, Norfolk, where he joined hundreds of young people attending its annual youth pilgrimage.

At a Mass which was part-led by a youth group, Welby said young Christians needn’t feel alone.

“Jesus gives us a community, a family, and we need to know we belong to it and to share in it,” he said.

“Because the more we are part of his family, which is the church, the stronger we are and the more we can live to change the world.”

‘You’re forgiven, I’m forgiven’
During the Mass, the archbishop said the cross symbolizes the forgiveness which is the “supreme truth of being a Christian.”

But he added that the biggest thing Christians need to learn is that God forgives them.

“Most of us still carry around a good deal of guilt in our lives. And the thing we struggle with is that someone who we’ve never seen loves each one of us enough to forgive us.

“There isn’t a single person in here who finds that easy to get. But it is the supreme truth of being a Christian. You’re forgiven, I’m forgiven. And we each need it,” he said.

The archbishop added that it is “very easy as Christians today to feel very alone. We feel we’ve got to deal with it all ourselves.”

But drawing a contrast with James Bond – which was the theme of this year’s pilgrimage – the archbishop said being a Christian was “the exact opposite” of having to save the world single-handedly.

“Jesus gives us a community, a family, and we need to know we belong to it and to share in it,” he said.

“Because the more we are part of his family, which is the Church, the stronger we are and the more we can live to change the world.”

He continued: “God came and lived a holy human life, died on the cross, was raised from the dead, sent his Holy Spirit and gives us a job to do. It’s the most exciting thing. It’s the most extraordinary thing. We have a job, a mission, for Jesus. There’s a mission for each of us, and we need to know it.”

Con-celebrating Mass with the archbishop, Father Stephen Gallagher said those present at Walsingham had been “strengthened” by his visit.

“It’s a very beautiful thing that so early on in his time as an archbishop he asked to come to be at this youth pilgrimage. It’s a wonderful thing and we’ve been blessed by his willingness to come and by the things he has shared with us,” he said.

Gallagher then led a prayer for Welby, offering “our fraternal love to this spiritual Father and Brother” and asking God to “give him courage to speak your Word.”

Giving thanks for the prayer, Welby asked the young people to keep praying for him, especially “when I fail.”

“One of the changes we can make in the church that will change our church is when we see brothers and sisters in Christ get things wrong – and I will – rather than just dismiss them out of hand, we love them and pray for them.

“So I ask for your prayers constantly, but above all when I fail,” he said.

The previous evening Archbishop Justin led a candlelit procession to the Shrine, walking barefoot along the Holy Mile with crowds of young people as they held banners and sang worship songs.

In a moving scene, he then gave Benediction to young pilgrims as they knelt silently with candles before the Shrine.

During his visit to the youth pilgrimage, Welby also led several hundred young people in a Bible study session on St. John’s account of the crucifixion.

The administrator of the Shrine of Our Lady of Walsingham, the Rt. Rev. Lindsay Urwin, said over recent years a big effort has been made to make Walsingham a place where “young people can be welcomed as young people.”

He said: “At this particular pilgrimage we seek to present the gifts of the church in a place which is living 24-7 as if God is true. In some of these parishes, young people are being constantly bombarded with secular messages not only about God but about themselves. And when they come here and give it a chance, we fail, but 24-7 we’re living from a sacred perspective. And this can open young people to a different possibility of how the world is, and the way life is, and the way they are.

“We want them to view themselves as sacred. It’s not just about statues and even sacraments. It’s also for them to discover that they are sacred in the core… they are made for a sacred life,” he said.

A picture gallery of Welby’s visit to Walsingham is available here.