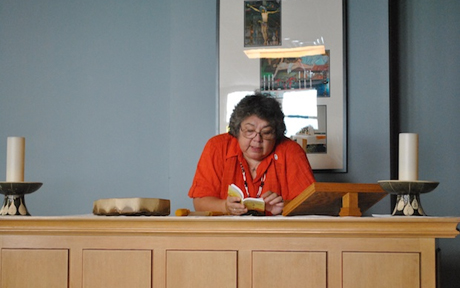 [Anglican Journal] Anglican Church of Canada staff on July 25 held a prayer service to commemorate the fifth anniversary of the Canadian government’s apology to First Nations people for the Indian residential schools system.

From the late 19th century to the mid-20th century, about 150,000 First Nations, Inuit and Métis children were taken from their homes and sent to federally funded schools managed by Anglican, Catholic, Presbyterian and United churches, where a number reported physical, mental and sexual abuses.

The gathering at the national church’s Chapel of the Holy Apostles in Toronto was organized by its indigenous ministries department and was dubbed a National Day of Prayer: Honour the Apology.

Canon Ginny Doctor, indigenous ministries coordinator, led the service, which included “Gospel-based discipleship,” a recitation of the “prayer beads for healing,” drumming, singing of hymns, and prayers of the people, which were based on Prime Minister Stephen Harper’s historic apology.

Doctor urged staff to reflect on the message of the day’s gospel as it relates to the apology and to the meaning of establishing “right relations,” not only between aboriginal and non-aboriginal people but with peoples of the world.

Honour the Apology events were also held across Canada by grassroots native activists who are calling on the government to live up to the apology issued by Harper in 2008. Rallies were organized in Winnipeg, Vancouver, Ottawa, Edmonton, Saskatoon, Sudbury and Thunder Bay, Ontario.  The events were publicized, including through a Facebook page, #HonourtheApology.

Activists urged the federal government to  “release all documents pertaining to the residential schools in Canada immediately” and to work toward ending violence toward Canada’s indigenous people.

The day was sparked, in part, by a Canadian Press story about how, in the 1940s, the Canadian government subjected about 1,300 aboriginal people—including children from six residential schools—to nutritional experiments that included withholding food and basic dental care. The story, which first appeared in the May 2000 issue of the Anglican Journal, drew outrage from various quarters.

News about these experiments underscore the importance of releasing all government documents relating to residential schools and turning them over to the Truth and Reconciliation Commission (TRC), say organizers. Created as part of the 2007 Indian Residential Schools Settlement Agreement, the TRC is mandated to document the history of residential schools and to educate Canadians about it.

Last December, the TRC took Ottawa to court, saying it has failed to provide documents that are important to its mandate of delivering “truth, reconciliation and ultimately, healing” for former students and their families.

“If the parties, through incompetence, delays or deliberate stonewalling (or a combination thereof) sabotage the work of the commission, then Canadians are certain to forget (and never fully learn) what has happened” the commission told the Ontario Superior Court of Justice. The TRC also expressed concern that the impediment would hamper completion of its work, which ends July 1, 2014.