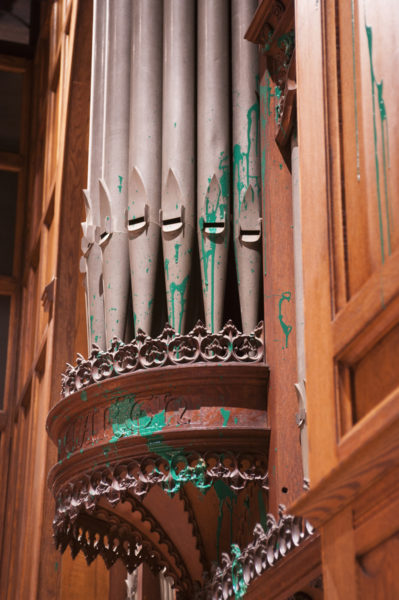 The paint was still wet when staff discovered it on the chapel’s organ console and casework, leaving officials to believe the vandalism had occurred just recently, according to the cathedral. Cathedral officials contacted D.C. Metropolitan Police immediately and closed the chapel.

When paint also was found in the Children’s Chapel on the nave (main) level of the cathedral, the cathedral closed to the public for the duration of the investigation.

Bethlehem Chapel, where the vandalism occurred in the cathedral’s lower level, is the oldest portion of the cathedral, completed in 1912. It was the site of burial rites for President Woodrow Wilson in 1924 and the original location of his tomb for more than three decades before he was interred permanently in a memorial bay bearing his name on the cathedral’s nave level.

DC Police later on July 29 said that officers arrested Jiamei Tian, 58, at the cathedral. The woman, whom police said had no known address, was charged with defacing property.

The police said detectives were cooperating with the U.S. Park Police to determine whether Tian was involved in similar offenses. On July 26, someone splashed paint on the Lincoln Memorial. On July 29, the statue of Joseph Henry on the National Mall near the Smithsonian Institution was discovered to have been defaced with paint. Henry was a Scottish-American scientist who served as the first secretary of the Smithsonian.