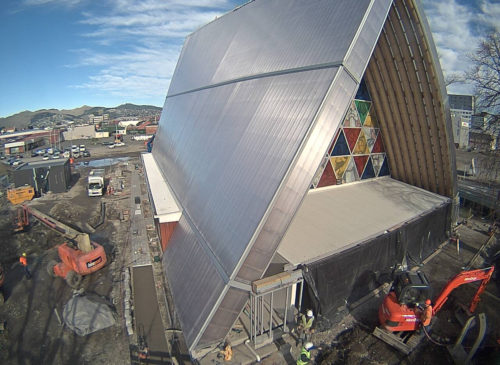 The construction of Christchurch, New Zealand’s transitional cardboard cathedral now includes work to repair damage caused by recent rains to some of its 24-inch cardboard tubes. Photo: Diocese of Christchurch

The $5.3 million cathedral will be dedicated at a special service on Aug. 15.

The cardboard cathedral will temporarily replace Christchurch’s Anglican cathedral, which was destroyed in a February 2011 earthquake that killed 185 people.

Designed by “emergency architect” Shigeru Ban, the 82-ft cathedral is being constructed with 24-inch cardboard tubes as well as timber beams, structural steel and a concrete pad.

Church spokesperson Jason Rhodes told New Zealand media that, “It was always known from the very beginning that there would be some rain that would hit the cardboard in some way, shape or form.”

He said it was easy enough to pull out the damaged tubes and replace them.

“Some of the cardboard got wet when the building was not fully enclosed…the roof is now enclosed and finished so that same risk doesn’t exist,” Rhodes was quoted by AFP as having told radio station Newstalk ZB. “It’s nothing to be worried about at all. The builders anticipated this would happen. It’s just cosmetic.”

The cathedral was originally expected to be completed last December, but had been delayed by a number of factors. For one, “a Christchurch company could not make tubes thick enough to support the building, and Ban wanted to use local materials rather than import them,” reported New Zealand’s The Press. Heavy rain early in construction, the difficulty in installing the colored windows and late design changes also delayed the project, it added.