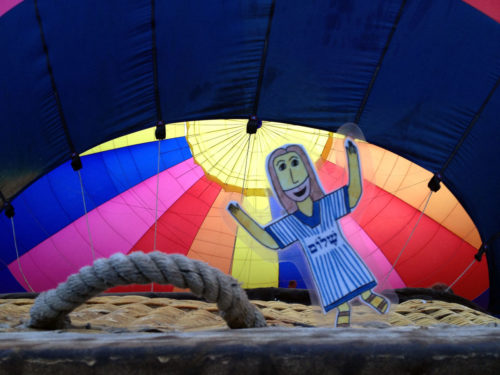 [Episcopal News Service] If God is everywhere, a laminated dude named Flat Jesus is doing his best to prove the point.

Just check out his Facebook page and you’ll find him riding in a hot air balloon with Virginia Episcopalians, accompanying mission trips to the Dominican Republic and Kenya, watching Despicable Me 2, assisting with sermons (is that cheating?), relaxing on the beach and snuggling a dog. He even hangs out with the much-taller Flat Andy, modeled after Bishop Andy Doyle of the Episcopal Diocese of Texas.

Flat Jesus is a laminated, hand-colored paper doll traveling the world this summer courtesy of St. James Episcopal Church in Birmingham, Michigan. The original “flat” character was Flat Stanley, star of a book by Jeff Brown in which a boy has remarkable adventures after waking up one day to discover he is flattened to half-an-inch thick. Today, schoolchildren routinely write letters accompanied by Flat Stanleys to friends and family, who provide fun geography lessons by snapping photos of the paper fellow posing at various local sites. There’s even a Flat Stanley Project app.

Stanley inspired other “flat” folk, including Flat Andy. Chris Gannon, Flat Jesus handler and minister to youth and adults at St. James, saw something about Flat Jesus online and thought, “Oh, wow, what a cool way to keep our congregation kind of connected over the summer.” 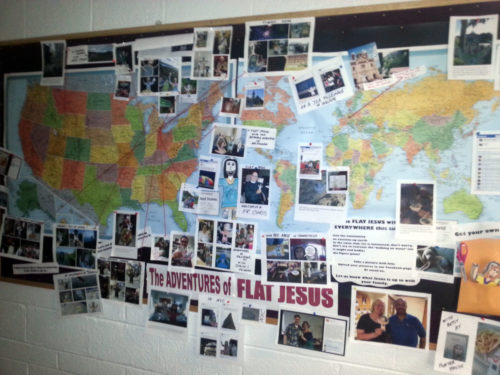 A bulletin board at St. James Episcopal Church in Birmingham, Michigan, tracks the travels of Flat Jesus. Photo: Chris Gannon

Gannon created a template and enlisted the parish’s children in coloring a few dozen and distributing them to parishioners to take along on vacation and send photos. “I think they were a little hesitant at first,” Gannon said.

But a vestry member brought Jesus to Germany and posted pictures. One family reported back from a multi-generational vacation in Alabama. “The pictures were just priceless” – including Flat Jesus buried in sand at the beach – Gannon said. Lamination has allowed him to walk on water in several locales.

Word spread. Folks outside St. James began requesting Flat Jesus – about six a day, now – and posted their pictures and conversations about him on the Facebook page. An overflowing bulletin board at the church charts his travels. From June 17 to July 18, 114 Flat Jesuses headed out the door.

Not stuck in a fashion rut, he sports several different tunics. “We’ve got peace signs on them. We’ve got Larry Boy from Veggie Tales,” Gannon said. They’ve created special tunics for the different states he hasn’t been invited to yet – the first Vermonter to request a Flat Jesus, for example, will receive one depicting his favorite Ben and Jerry’s flavor, Whirled Peace.

And he does like ice cream, at least according to an entry on the Rev. Elizabeth Kaeton’s blog, in which he and his priestly chauffer discuss issues of both justice and calorie counting.

“You know, it’s a good thing these are only 170 calories, or I’d quickly move from being ‘Flat Jesus’ to ‘Fat Jesus,'” he says after a celebratory ice cream cone.

Kaeton was among the first to request Flat Jesus and boosted his profile with her blog posts about him, Gannon said. “I think she was probably a huge reason why it’s gotten so big and gone so far.”

But “fat Jesus” moments, not to mention a Facebook photo of the flat vacationer enjoying a beer at the beach, sometimes make her worry that someone will object to the Flat Jesus project. So far, Gannon said, no one has.

“Those are the moments when I fear that somebody would see it as heretical or spoofing too much,” she said. “I think it just makes Jesus more accessible.”

And, far from being silly, she said, “I think we’re being very serious about evangelism. I just think this is a perfect way to start conversation. Folks who don’t normally talk about Jesus … wouldn’t talk about what Jesus thought about their day together as a family, are doing so, and I just think that’s wonderful.” 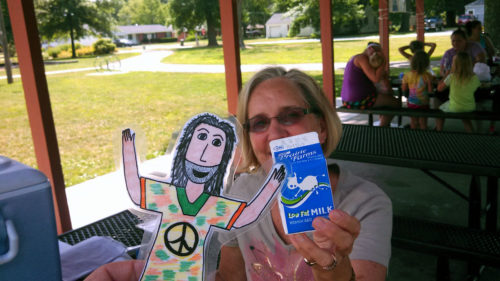 Jesus does a little outreach with Jessie Cragg of Trinity Episcopal Church at a summer feeding program in Kirksville, Missouri. Photo: Maria Evans

Dr. Maria Evans, a laboratory medical director at a hospital in Kirksville, Missouri, ordered a Flat Jesus after reading about him on Kaeton’s blog and immediately brought him along to help out at Food for Kids in town.

A large percentage of the county’s children receive free or reduced school lunches, she explained. “That means during the summer they may not be getting lunch. Several churches in town have partnered together to have a summer feeding program, where everybody who comes to one of the city parks can get a nutritious lunch, and that includes the adults that accompany the children. So Flat Jesus went there. The kids thought he was kind of cool.”

Later, he attended a nursing home Eucharist and Bible study on the story of Mary and Martha.

“He kept quiet,” Evans said. “I figure, if he had any problems with the way we were interpreting it, he would’ve said something.”

How much Flat Jesus talks, Gannon observed, “depends [on] who he’s talking to.”

“He is ecumenical,” she noted. He traveled to Indiana to attend the Presbyterian Church’s triennial youth event and also visited a Presbyterian vacation Bible school.

Evans planned to take her Flat Jesus to vacation Bible school as well as worship at her church, Trinity Episcopal in Kirksville. “I’m hoping to talk to a couple of the youth at my church to see if they want to borrow Flat Jesus for a while. 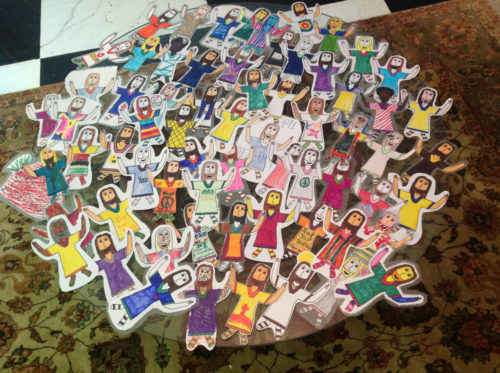 She hopes Flat Jesus will give local youngsters a larger perspective on the world. “Growing up in a small town, the world was very insular to me. It was hard for me to imagine places outside of small towns in Northeast Missouri. … A project like this, I believe it connects these youth with a much wider world – in this particular case, the much wider world of the Episcopal Church.”

“Even if it’s kind of silly, anything that we do for the youth that widens their world and the world of the church is going to help them when they become adults to learn how to live up to the Baptismal Covenant, to see Christ in everyone,” she said.

In an e-mail, Kaeton said she’d taken Flat Jesus “everywhere” and had been intrigued by how instantly recognizable he was.

“My hospice patients who are Christian have loved it when I’ve brought him along with me when I visit. I have also taken him into skilled nursing facilities where many of my patients also suffer from Alzheimer’s disease and senile dementia,” said Kaeton, an Episcopal priest and hospice chaplain in Delaware.

“Most times, I don’t even have to introduce him. ‘Oh, look,’ they say, ‘It’s Jesus!’ More often than not, that’s more words than they’ve said in weeks. It’s interesting that ‘Flat Jesus’ doesn’t exactly look like ‘traditional’ images, but they recognize him immediately. It’s also deeply moving to me that they recognize ‘Flat Jesus’ but no longer recognize their spouse or children or grandchildren.” 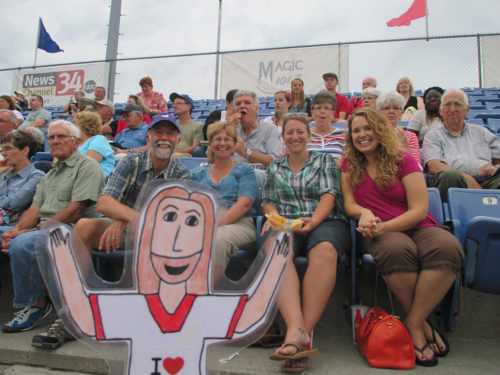 Bishop of Central New York Gladstone B. (Skip) Adams III visited the Binghamton Mets to throw out the first pitch. Flat Jesus was there to welcome the bishop to the game along with more than 140 Episcopalians from the Binghamton district. Photo: Courtesy of Chris Gannon

“I think it’s a wonderful way to keep a congregation connected to their communities of faith during the summer vacation months,” she said, adding, “I love ‘Flat Jesus’ because it’s an easy way to start a conversation about Jesus. In my experience, most Christians (well, okay, most Episcopalians) do not have a problem talking about God or the Spirit, but they stumble over talking about Jesus, even though they self-identify as Christians. There may be lots of reasons for that, but I suspect there’s a strong impulse to avoid association with more fundamentalist Christian groups whose Christology is narrow and rigid and judgmental.

“I think ‘Flat Jesus’ helps us to reclaim Jesus from those who have hijacked his image and his teaching. It allows me the opportunity to do some teaching about his unconditional love and the gift of forgiveness and grace which are undeserved and unearned. It also allows me to talk about the ‘deep joy the apostles first knew.’ Those are critically important messages for people who are hungering and thirsting for Good News, but especially for hospice patients and their families to hear.”

While everyone has recognized the cutout as Jesus, she noted, “I have had Asians and African Americans and Hispanic folk say wistfully, ‘He doesn’t look like me’ or ‘That’s not the way I imagine Jesus.’ I’ve also had some women and men who are feminist Christians say, ‘Jesus, for me, is Sophia.’ I’ve had some wonderful conversations about how the church needs a broader Christology with several folks that I think the institutional church needs to hear.”

The Rev. Tim Schenck, rector of St. John the Evangelist Episcopal Church in Hingham, Massachusetts, and creator of the annual saints competition modeled after basketball’s March Madness, wrote to ENS that he had not “personally encountered Flat Jesus.”

“While at first glance, the idea of Flat Jesus is rather one-dimensional, anything that gets people talking about Jesus is terrific,” he said. “Maybe we’ve been misquoting him all these years. Instead of saying ‘Follow me,’ perhaps he really said ‘Flatten me.’ I’m delighted he’s taking an interest in next year’s Lent Madness bracket and, who knows, maybe Flat Saints aren’t far behind?”

To Evans, it’s all about finding creative ways to spread the Good News. Like Flat Jesus, she said, “Lent Madness has been another one of those things that people are like, ‘Oh, is this really evangelism?’ and yeah, I think it is.”

To request a Flat Jesus, contact Chris Gannon at chris@stjamesbirmingham.org.