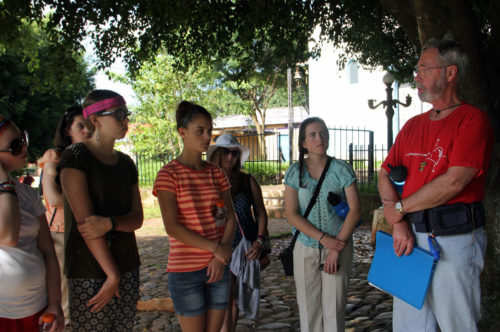 Chuck Stewart interprets for a youth group from the Episcopal Diocese of Central New York during a visit to El Mozote, the site where in 1981 government troops massacred 800 residents of the village. Photo: Lynette Wilson/Episcopal News Service

[Episcopal News Service] Driving into the small, tranquil village of El Mozote, it’s difficult to comprehend that one of the largest violations of human rights in the modern Americas occurred there 31 years ago.

The Inter-American Human Rights Court called the 1981 killings in and around El Mozote “a systematic plan of repression” carried out by El Salvador’s military during the civil war.

Between Dec. 11 and 13 of that year, government soldiers shot dead more than 800 people, more than half of them children, in what was the largest massacre during El Salvador’s 12-year conflict that killed some 75,000 people.

“It reminded me of My Lai,” where U.S. Army soldiers murdered more than 300 unarmed civilians in South Vietnam in 1968, said Audrey Cleaver-Bartholomew after visiting the El Mozote memorial as part of an Episcopal youth pilgrimage. 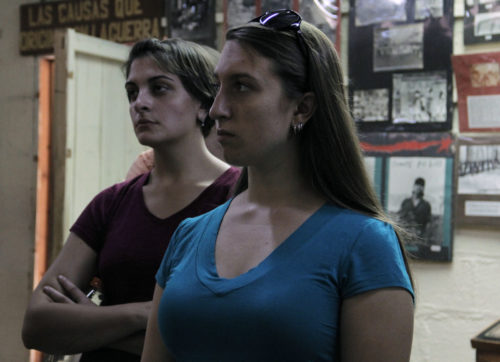 Audrey Cleaver-Bartholomew, foreground, and Pilar Padrón during a visit to the Museum of the Salvadoran Revolution. Photo: Lynette Wilson/Episcopal News Service

Cleaver-Bartholomew studied the 1990s ethnic cleansing in the former Yugoslavia and the My Lai Massacre in high school genocide class, but the El Mozote Massacre wasn’t mentioned, she said.

In El Mozote, the soldiers carried out the massacre over two-and-a-half days, said Cleaver-Bartholomew, 19. “[The soldiers] had time to think about it. It was so systematic. What can get people to that point?”

“You can understand the details, but not the motives,” she added.

The youth group – six girls aged 14 to 19 – visited many of El Salvador’s historic sites, including the Chapel of Divine Providence Hospital, where Roman Catholic Archbishop Oscar A. Romero was assassinated on March 24, 1980; the Romero Center and Museum of the Martyrs at the University of Central America; the Monument to Memory and Truth, which lists the names of people killed during the civil war; the Museum of the Salvadoran Revolution; and El Mozote, the site of the 1981 massacre.

The Episcopal Diocese of Central New York and the Anglican-Episcopal Church of El Salvador have been in a companion relationship, formally and informally, for 20 years, said Chuck Stewart, chair of the companion diocese committee and a member of St. James in Skaneateles.

It was the seventh youth pilgrimage Stewart had led to El Salvador.

The trip aimed to expose the young people to a different culture, “yet show them that people here have the same aspirations,” said Stewart. In the more than 20 trips he has made to El Salvador over the years, he added, “I’ve learned that people are the same everywhere, they can be joyful and happy in grinding poverty.”

Besides visiting the various historical sites, the group also traveled to communities of extreme poverty assisted by the church and Foundation Cristosal, a human rights-based community-development organization.

One thing Cleaver-Bartholomew noted toward the end of the weeklong visit to El Salvador was that, despite the history of violence and the violent current reality – El Salvador has one of the highest murder rates in the world – people live in relative peace, without the everyday anxieties suffered by people of affluence.

“You’d think it would be the opposite,” said Cleaver-Bartholomew. “I’d heard about El Salvador before I came, but it doesn’t add up until you get here.” 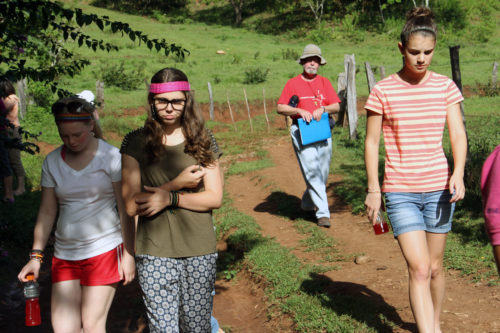 The group descends from the hill where some of the women and children were said to have been massacred in El Mozote. Photo: Lynette Wilson/Episcopal News Service

From 1980-1992, El Salvador suffered a brutal civil war fought between its U.S.-backed, military led-government and a coalition of guerilla groups, organized as the Farabundo Martí National Liberation Front, or FMLN. The war was fueled mostly by the gross inequalities that existed between a small group of wealthy elites who controlled the government and the economy and the majority of the population that lived in extreme poverty.

Pilar Padrón, one of the group’s chaperones, first visited El Salvador on a similar youth trip from Central New York.

“The last time I came down I was their age,” said Padrón. “It changed my life so much, I’m excited to see how they are changed.”

Padrón first visited El Salvador when she was 16. She previously had visited the Dominican Republic, where her father was born. Still, she said, nothing prepared her for the poverty and the resiliency she witnessed.

“It made me feel like I wanted to do more for them … It opened my eyes to suffering and showed me that there are ways that we can help,” she said, adding that afterward she began to feel called to the priesthood and to the work of bridging the gaps between communities and countries. “It made me want to stand for something, for people, to lead communities of faith and teach the gospel.”

Padrón, now a student at SUNY Fredonia and a member of St. Peter’s Episcopal Church in Westfield, New York, is an aspirant in the Diocese of Western New York.

“I’m excited to see where [the girls] take this experience later in life,” she said. 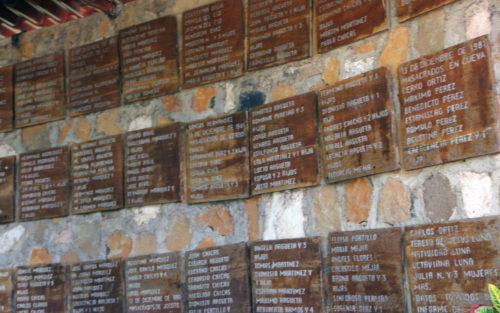 The names of the people who were massacred are listed on the wall at the memorial in El Mozote Photo: Lynette Wilson/Episcopal News Service

A four-hour drive from San Salvador, the town of El Mozote is located in Morazán, a department, or “state,” in El Salvador’s northeast held by rebels during the latter years of the civil war. El Mozote remained neutral during the war, and its citizens were told that they’d be safe as long as they didn’t align themselves with the rebels. In the end, that’s not what happened.

When the soldiers first arrived in El Mozote in 1981, explained local guide Estella Lopez Chica, they separated the men from the woman and the children, killing the men first.

Soldiers raped the women and girls before killing them, and small children and infants were later found hanging in the branches of a mangrove tree, their throats slit, said Lopez.

The guide’s mother survived the massacre, she said, because she was away from town selling goods at nearby market the day the soldiers arrived. The account is based on the sole survivor’s testimony. 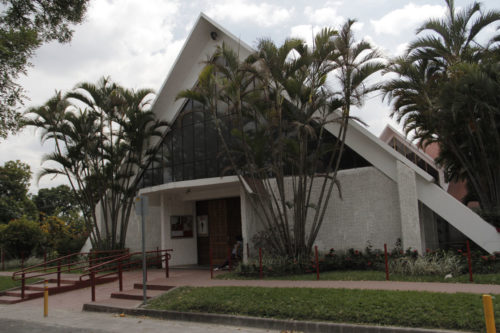 “Today was really powerful, I was getting really emotional, just to know hat someone could do that to another person,” said Molly Allyn, 15, of St. James Episcopal Church in Skaneateles.

Traveling together in this environment, where everything is very serious, you get to know a different side to people, she said.

“In the van, we can be obnoxious sometimes. But on the first or second day after learning about the civil war for the first time, it went from talking and laughing to complete silence,” she said. “It’s hard for us to process sometimes because we can’t relate it to anything that has happened in our lives.

“Being here is not like sitting in a history class.”

El Mozote was upsetting and hard to handle, said Mary Sawyer, 19, of St. Matthew’s Episcopal Church in Moravia. She will attend Onodaga Community College in Syracuse in the fall.

“I have always felt safe in the U.S.,” said Sawyer. “I’m from a small town where everyone knows each other. I can’t imagine how anyone could go through that. I have nothing but sympathy for those people.”

Sam Laurie, 16, a high school junior and a member of Christ Church in Manlius, participates in model United Nations, where students are assigned a country and a committee and y run a mock general assembly, discussing topics and writing and submitting resolutions. In the past, Laurie has been assigned Pakistan, Switzerland and Hungary.

Laurie learned a lot about El Salvador, she said, putting into context some of what she’d learned studying post-Cold War, post-imperialist Latin America in her advanced-placement history classes. She also witnessed firsthand how devastating it can be for a country prone to earthquakes and other natural disasters, with nothing but raw materials to sell to the global market, to move from a culture of dependency on wealthier nations.

In college, Laurie plans to study international relations. She said she hoped eventually to become a diplomat.

“This experience has changed, opened my eyes a lot,” she said, adding that, if people really knew what was happening in the world, they would work to change it.

“But either they don’t know or they don’t want to know,” said Laurie. “The world is never the same. It changes every day no matter what. What people can control is that it changes for the better or for the worse.”

— Lynette Wilson is an editor and reporter for the Episcopal News Service. She currently is based in San Salvador, El Salvador.