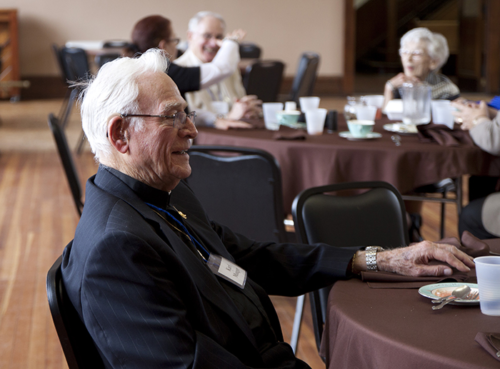 Mauger served on active duty during World War II and the Korean War. He served as superintendent of the North Pocono School District and the Bellefonte Area Schools. Mauger, ordained a priest in the Episcopal Diocese of Bethlehem in 1984, served parishes in Hamlin, Honesdale, Indian Orchard, Wilkes-Barre, Kingston and Scranton, served as a volunteer chaplain at Community Medical Center and as director of pastoral care at Moses Taylor Hospital, Scranton. His wife of 55 years, Mary Ann, died in 2006.

Holy Eucharist will be celebrated at 11 a.m. on Friday, July 19, at Good Shepherd Church, Scranton.

Diocese of Bethlehem Bishop Paul Marshall wrote the following to the diocesan community: “I have received news of the death of Fr. K. Fred Mauger. It is hard to express my grief at his loss. He was always a very strong supporter of my ministry and that of this diocese. None of us who knew him will forget his ministry to his dear wife, what he called “the long good bye.” He was devoted to chaplaincy and to the parish of the Good Shepherd in Scranton where he provided a calm voice of stability in difficulty times. Fr. Mauger was a member of “the greatest generation” and his rank of general in the army attests to his devotion. I do not expect to meet again a man so devoted to duty and the integrity of Christ’s Church. He knew that duty rather than emotion is the heart of joy and for that we are are all in his debt. Rest Eternal grant him, O Lord, and may light perpetual shine upon him.”

Kat Lehman, diocesan director of communication and information technology, said Mauger was “an amazing man and one of the most interesting individuals I ever had a chance to talk with in the diocese. He and I shared a few war stories from our service to the National Guard and he was quite an inspiration. One of my favorites was when one of his grandchildren or great nephews earned his spurs The young man was quite proud of them as it is a time-honored rite of passage for cavalry members to earn them. They get them from performing correctly in a series of tank tables and maneuvers, cavalry being now mechanized (or in the case of air cav, proper air tactics). He proudly showed them to MG Mauger who responded that he actually had to learn to ride a horse and use his properly in a cavalry charge before he was awarded his.”

A full obituary is available here.