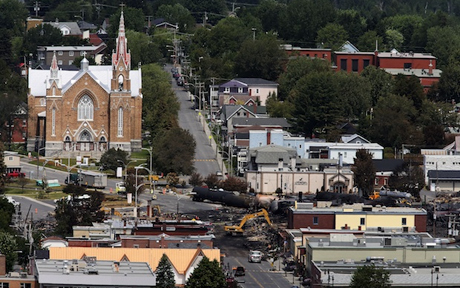 Workers begin digging at the site of a derailment in Lac Megantic, Quebec. A driverless, runaway fuel train that exploded in a deadly ball of flames in the center of this small town rumbled down an empty track minutes after a fire crew extinguished a blaze in one of its parked locomotives.

[Anglican Journal] As the world has looked on in shock and disbelief following last weekend’s devastating train derailment in Lac-Mégantic, Quebec, the church has been — literally and figuratively — at the center of the deadly tragedy.

Incredibly, the nearby parish church was not among them. Sainte-Agnès, an imposing, century-old brick construction, appears to have suffered only minor damage. Nevertheless, the church building has been off-limits since the derailment, as rescue workers try to recover victims’ remains and investigators try to piece together what led to the derailment.

Even with the main parish church temporarily closed, the Roman Catholic parish priest, Fr. Steve Lemay, has been ministering night and day.

He has been spending a lot of his time at a local high school in a part of town undamaged by the explosions, where the gymnasium has been converted into a shelter for those whose homes were destroyed by the oil blasts, and for those evacuated from their residences for fear of still more explosions. Lemay is himself an evacuee; the rectory in which he lives is in the zone cordoned off by emergency officials.

In addition to offering pastoral care and counseling to the victims, Lemay and other priestly colleagues have been celebrating mass in the school-turned-shelter, as well as in Lac-Mégantic’s other Roman Catholic parish church, situated in a neighborhood spared by derailment’s catastrophic aftermath.

Lemay has also been using Facebook to provide the local community, and those outside, nightly updates on the situation on the ground.

“Thank you for your prayers!” Lemay posted on his Facebook page Sunday night. “The people of Lac-Mégantic are united and they build me up with their courage…I’m not returning calls unless they are about the affected families, because they are my priority for the moment…Pray for the affected families. May the Lord be our strength!”

The Anglican bishop of Quebec, the Rt. Rev. Dennis Drainville, traveled with his wife, Deacon Cynthia Patterson, to Lac-Mégantic on Sunday. They met with Lemay and other survivors and evacuees housed at the high school, some of whom were asking how God could allow such a tragedy to occur.

“The issue is not coming here to provide answers. The issue is to be with people,” Drainville said in an interview. “At the very core of a crisis like this, the need is to let people know that they are not alone. And so we provide not answers but a willing ear to listen, a shoulder to use if a person needs to weep. We’re there to in a sense to let people see the human dimension of love.”