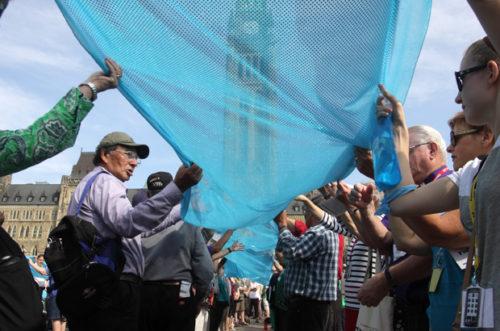 Members of the Anglican-Lutheran Joint Assembly held a prayer service focused on the issue of access to clean water for all. Here the crowd carries a large ribbon of cloth representing water. Photo: Art Babych

[Anglican Journal] Hundreds of Anglicans and Lutherans in Ottawa for Joint Assembly converged on Parliament Hill on Saturday morning for a prayer event intended to draw attention to the issue of access to clean water, particularly in aboriginal communities.

Led by Lutheran and Anglican youth, the event gathered people into circles of 12 on the walk in front of the Peace Tower on Parliament Hill.  Volunteers held long ribbons of turquoise cloth that sparkled in the sun and cascaded down the steps like a waterfall. The ribbons were later carried through the crowd after the service .

The prayer service was led by Archbishop Fred Hiltz, primate of the Anglican Church of Canada, Susan Johnson, national bishop of the Evangelical Lutheran Church in Canada, and Lydia Mamakwa, area bishop for northern Ontario. There were prayers for the rivers, for people who make their living from the water and for people who cross oceans. There were also prayers for the responsible use of water in urban and rural settings.

Heather Werboweski, 17, from First Lutheran in Winnipeg, told the Journal that she thinks the event will have an impact. “Now more people are aware that it’s an issue and so I hope they will more consciously think about the water that they use and think about the people who don’t have the resources that we do.”

Deb Roberts, a member from Christ Lutheran Church in Regina who attended with her 14-month-old daughter Rowan, said the event was a great idea. “It shows solidarity working together for the Lutherans and the Anglicans and for everybody with the native people…We all are treaty people…water is an issue for all of us, so we should all have the same rights and the same access to water.

Bishop Adam Halkett of the diocese of Saskatchewan said, “The water is being damaged, so it’s going to affect our grandchildren. It’s affecting us already today, so we need to let the government know that we are the people of this land. We didn’t sell anything…We shared a lot of this land and water is also a part of that.”

Bishop Susan Johnson said the event was “a wonderful opportunity to be on the Hill and to make this really significant gesture and statement right at the foot of our nation’s capital.”