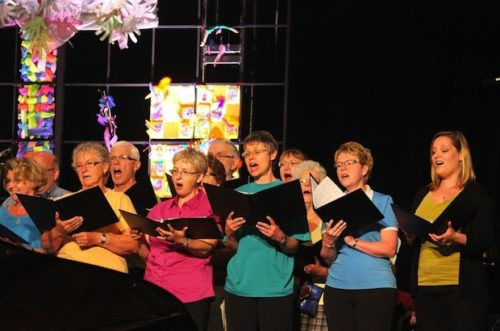 [Anglican Journal] The first-ever Joint Assembly of the Anglican Church of Canada and the Evangelical Lutheran Church in Canada (ELCIC) ended with a flourish of beating drums, rousing hymns, and an exhortation to “go forth for the love of the world.”

Drummers pounding djembes greeted the approximately 500 delegates as they gathered in the plenary hall for the Joint Assembly’s closing eucharist.  ELCIC National Bishop Susan Johnson began the service with an impromptu invitation to delegates to remove their different-coloured lanyards, which indicate their name and status at the gathering, so that during the liturgy “there is no delegate or visitor, Anglican or Lutheran, so we are one in Christ.”

Like the Joint Assembly’s opening service, the closing celebration was an attempt to combine the traditional shape of a eucharistic liturgy will creative innovations.  Among them was the proclamation of the gospel, Luke’s story about the sending of the 70, which was set to music and sung as a duo by Montreal Lutheran delegate Charlotte Corwin and the Joint Assembly’s musician, Tim Piper.  “We, who have been gathering in this assembly in some multiple of 70 are the current wave,” Archbishop Fred Hiltz said in his sermon. “This is our moment in time. God has given this moment to us.”

Hiltz urged his listeners to use that moment to go out and act on some of the issues on which the Joint Assembly took positions, like responsible resource extraction, access to clean water and affordable housing.

“Our faith is not a private affair. It is a public faith. And our faith does take us into the arena of politics,” the primate said. “Our faith impels us to work for a just social order.”

That theme was picked up in the prayers of the people, which were led by Canon William Cliff of the diocese of Huron. The petitions, prayed in an artistic, spokenword style and musically accompanied by a djembe and an Indonesian rainstick, also focused on the Joint Assembly’s focus on water, homelessness and exploitation of natural resources.

The eucharistic prayer was the same original composition used at the opening liturgy, but this time sung by Bishop Susan Johnson.  A 40-voice choir of Joint Assembly delegates, clothed in a colourful array of T-shirts, led the gathering in singing hymns, which included the public debut of “Great God, Whose Story,” commissioned for the 2014 Anglican-Lutheran National Worship Conference in Edmonton.

“I ask the Creator to guide you home safely now, to the directions that you are going to be heading: to the north, the east, the south, the west, to take you home to your families, to take you home to your loved ones,” Smith-St. Georges said.  She also led the gathering in a moment of silence in memory of those killed by Saturday’s devastating freight train derailment and explosion in Lac-Mégantic, Quebec.

In their own dismissal, Archbishop Hiltz and Bishop Johnson stood side by side as they together offered the delegates a final blessing, invoking the Joint Assembly’s theme: “May you journey in hope towards a vision that brings us together for the love of the world.”

Also coming back together was the 12-foot-tall inukshuk, which was dissembled during the opening eucharist to form the Joint Assembly’s altar, font and ambo.  By the end of the concluding hymn, the distinctively Canadian marker of a gathering place had been reassembled by a team of worship assistants, who encircled it with joined hands as the deacon dismissed the historic gathering with the words, “Go forth for the love of the world.”