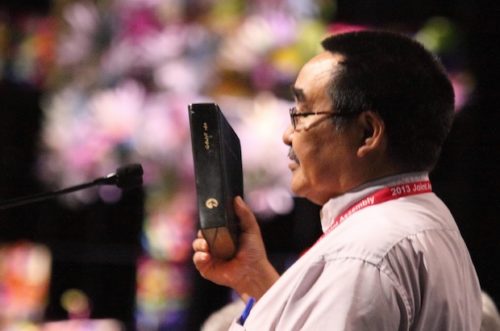 Terry Audla, president of the national Inuit organization Inuit Tapiriit Kanatami, said he is surprised how little most of his fellow Canadians in the south know about the north.

The Inuit are taking control of their land through new comprehensive land claim agreements, he said. “It protects our way of life in the sense that we can still hunt and conserve the wildlife that we rely on in partnership with government and also that we can be partners in major projects, which means that we are employees as well as the employers.”

In spite of those developments, Audla also spoke of continuing struggles with overcrowded housing, contamination of wildlife and their habitat, and high rates of suicide. He recommended that Canadians wanting to be more engaged with Inuit communities become better informed about the Arctic and the Inuit way of life.

Canon Jonas Allooloo, dean of the cathedral in Iqaluit, then came to the stage to tell the assembly members about the first translation of the Bible into Inuktitut, an immense task that began in 1978.

Allooloo was one of a team of four translators, including Bishop Benjamin Arreak, Bishop Andrew Atagotaak and the Rev. Joshua Arreak, who worked with translators at the Canadian Bible Society. Allooloo said they were chosen in part because Inuktitut is their mother tongue. The translators at the Bible Society recognized, he said, that while outsiders may learn the language, “It is very hard for them to think like Inuit.”

Even with the team’s combined efforts, “It was a long hard road, finishing the Bible,” said Allooloo. “Thirty-four years is a long time.” The New Testament was published in 1991, and the complete Bible with the Old Testament in 2012. He noted that a downloadable digital edition is also available.

Inuit Christians received the Bible with great joy. Allooloo said one woman wept, saying she had always longed for a Bible in her own language. He noted that 2,000 Bibles with leather covers sold out in one day.

“It has been a privilege for me to do this for my people,” he said. Allooloo added that this is an important way to keep aboriginal languages alive and urged other indigenous people in the assembly to translate the Bible into their languages.