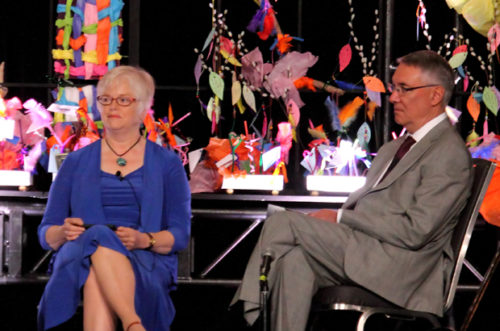 Pryse asked both to describe what they do in their work and on behalf of Canadian Lutherans and Anglicans. Granke said his work starts with CLWR’s mission, “which is to challenge the causes and consequences of poverty.” That mission is also part of the mission of the church to serve in the name of Christ, he said. “CLWR provides an opportunity to do that and enable people of faith to be able to serve and respond to global needs in a collective way.”

Finney said that PWRDF works toward “a truly just, healthy and peaceful world. We focused in on food security, preventive health and microfinance.” A question Finney says she often asks is, “How does what we plan to do support vulnerable people to become agents of change in their own lives and in their communities’ lives?” She pointed to the example of PWRDF’s partnership with a group of refugees who fled to India from Sri Lanka. Some have been in India now for 30 years, but from the beginning they focused on education, learning peace-making skills that would help them build a future. They also began production of a nutritional supplement, spirulina, and now they train others.

Looking to the future, Granke said CLWR is facing a real challenge because its funding from the Canadian government ends this year. CIDA is now being absorbed into the department of foreign affairs and trade, and Granke said NGOs are monitoring the situation, hoping that the focus on humanitarian aid will not be diminished in favour of trade interests.

“There are no opportunities at this moment for us to seek additional funding from CIDA, from the historical sources, so we’re having to be creative and look at ways in which we can draw other resources in the future.”

CIDA, in fact, is being integrated into the department of foreign affairs and international trade.  “We as a faith-based community and as NGOs in Canada are taking steps to monitor this. One of the key issues for us is to ensure that the integrity of the official development assistance act that Canada has had for many years is kept intact and that the focus is on humanitarian assistance…The risk is that more of this will go to serve our own agenda, which is more trade focused.”