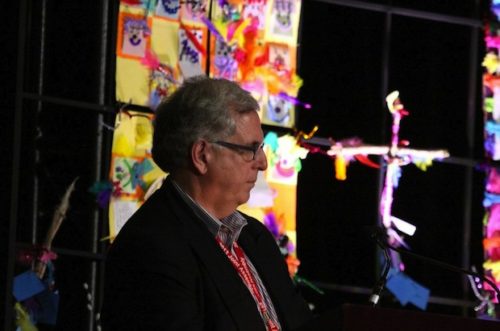 [Anglican Journal] A new formula for deciding clerical and lay membership at General Synod, which is projected to decrease its size, has been approved.

Membership to the Anglican Church of Canada’s governing body will now be calculated based on average attendance at four liturgical celebrations — Easter, Pentecost, the second Sunday in September and Christmas — over two years.

Currently, membership is determined by the number of licensed clergy in the diocese, a situation that has been regarded as problematic because licensing practices vary across the church.

After a lengthy discussion, Motion A042, which amended Section 8(f) of the church’s constitution, was approved on second reading by a two-thirds majority of each order at General Synod. Thirty-four bishops, 82 clergy and 105 laity voted in favour; three bishops, 23 clergy and 28 laity were opposed.

The motion presented by the governance working group (GWG) stated that minimum diocesan representation should be one clergy and one lay member, in addition to the youth member and bishop, for dioceses having an average attendance of 2,499 persons or less. Chancellor David Jones, chair of the GWG, said this would have reduced membership by about 15 per cent.

The new formula, which will use attendance statistics provided by dioceses to the national office, was met with some criticism on the floor. Several speakers stood up to question the accuracy and integrity of those statistics. Jones acknowledged that not all dioceses comply with the request for statistics, but expressed the hope that this new method would encourage them to comply.

Some members questioned the reliance on counting “membership and not discipleship,” and expressed concern that this could mean less representation for rural-based dioceses whose demographics are shifting. But others said bigger dioceses actually stand to lose some representation as a consequence of this new formula.

“Our ministry to the wider community is increasing, even as official membership is dropping,” said Jeff Peddle, from the diocese of Eastern Newfoundland and Labrador. “There are other ways of measuring affiliation. If we use attendance, let’s make sure it’s accurate.”

Dean Kevin Dixon, from the diocese of Huron, said that with a growing number of people moving into urban areas, a trend could arise where decisions will be made “by places where people are wealthy.”

This view was echoed by diocese of the Arctic Bishop David Parsons, who said that his diocese has a small representation even if “almost all” in the north, who have no access to churches or a minister, will say they’re Anglican.

Archbishop Colin Johnson, bishop of the diocese of Toronto and metropolitan of the ecclesiastical province of Ontario, urged caution against “stereotyping one part of the country as more powerful than another.” Southern urban areas are often viewed as “centres of great wealth,” but the reality is that power, privilege and education belong only to a few, he said. He noted that big cities like Toronto are “enormously diverse” and include people struggling with unemployment, poverty and low education.

Statistically, one in five Anglicans lives in Toronto,  said Johnson, and potentially Toronto could have 44 members. But he added, “We are represented well enough with the 24 that we have.”

Diocese of New Westminster Bishop Michael Ingham said that with the new formula, his diocese would actually lose its current representation. And yet, he said, “I rise to support this motion…Wealth and size shouldn’t play a part in our deliberations.” He added that “there is no perfect formula,” and if the formula results in improper distribution of representation, it could be amended down the line until “a smaller and more efficient” way of working is found.

Diocese of Niagara Bishop Michael Bird said he supported the motion,  but noted how it does not deal with the issue of episcopal representation. His own diocese’s representation fluctuated from two bishop members to one, he said, adding, “It makes a difference when some of the votes are taken in [the] orders.”