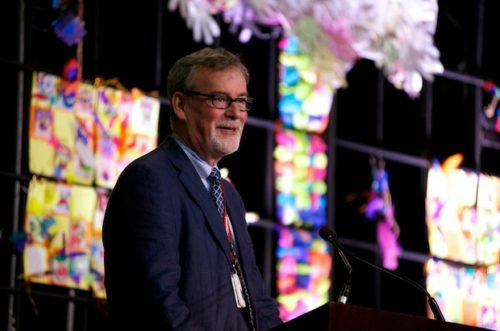 [Anglican Journal] General Synod on July 5 approved a motion to receive the report of the structures working group and commend it to the Council of General Synod, the church’s national executive body, “as a guiding document in moving forward with the structural renewal of the Anglican Church of Canada.”

A national consultation convened in January by the church’s primate, Archbishop Fred Hiltz, submitted the report, Embodying God’s Call, which identifies wide-ranging, immediate and long-term changes to the church’s structures.

The report calls for less reliance on standing committees and more grassroots involvement via task forces, a review of the size and function of General Synod, increased partnerships with dioceses and other churches, and operational reviews on the effectiveness of Resources for Mission, the national church’s communications vehicles and its informational technology capacity to support electronic meetings of committees and other church bodies.

Earlier, Hiltz explained that the consultation was in alignment with a mandate from Vision 2019, General Synod’s strategic plan, “to identify desirable changes in the structures and roles by which the Anglican Church of Canada carries out its ministry in service to God’s mission.”

In convening 40 consultation participants from across Canada, Hiltz noted that the gathering had been made more urgent by the church’s pressing financial concerns. It was set “in the context of a longer journey to structural renewal and budget equilibrium for the church,” he had said.

Archbishop Colin Johnson, bishop of the diocese of Toronto and member of the structures working group, told General Synod on July 4 that the report also requests the primate and the church’s metropolitans (senior bishops) to initiate a review of the House of Bishops’ role and the focus and frequency of its meetings. It asks bishops to consider  “the number of meetings that can and will be funded by General Synod and alternative time and ways to gather.”

The report also suggests that various General Synod bodies should “seek out new and expanded partnerships with dioceses and other entities,” including its full communion partner, the Evangelical Lutheran Church in Canada, and other partners. “Are there areas where we can have shared staffing…or others can work from remote locations?” said Johnson.

As part of “longer-term” changes, the report also calls for a review of the size, purpose and frequency of General Synod meetings.

Archdeacon Michael Thompson, general secretary of the Anglican Church of Canada, cited the need to “uncouple governance and program gatherings.” Speaking to members on July 4, Thompson said “we spend a disproportionate amount for meetings of governance rather than gatherings for missional ministries.”