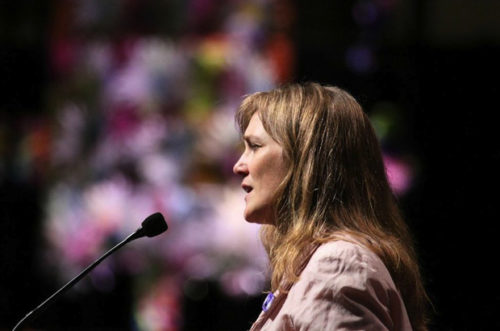 [Anglican Journal] Joint Assembly members were challenged on July 4 to think beyond the economic impact of resource extraction and to consider its “life and death” impact on indigenous communities in Canada and overseas and on the earth’s “ecological integrity.”

Members were presented a proposed joint resolution that would commit both the Anglican Church of Canada and the Evangelical Lutheran Church in Canada (ELCIC) to advocate for “responsible resource extraction” by Canadian mining companies and to support affected communities in demanding their right to “Free, Prior and Informed Consent” with respect to resource extraction, among others. The assembly is to act on the motion July 5.

For Canadian especially, resource extraction is “the critical justice issue of our time,” said Jennifer Henry, executive director of the Canadian ecumenical justice group, KAIROS, who addressed the assembly. “We have a tremendous impact on earth and all that’s in it.”

Mining is both a daunting and controversial issue, but it is one that churches must engage with “because those [with] whom we are one body in Christ are asking us to make the connections between the fuel we have in our vehicles, the money we make from our investments…and the serious human rights violations and ecological displacement” that result from them, said Henry.  “Our neighbours near and far are seeking for a response.” She also cited the biblical imperative of transforming unjust structures of society and safeguarding “the integrity of creation.”

Archbishop Fred Hiltz, primate of the Anglican Church of Canada, and ELCIC National Bishop Susan Johnson both spoke of the need to act on the issue.

“We are all in this together,” said Johnson, adding that the challenge before members is “how to reduce consumption and help generate solutions.”

Hiltz said the abuses are “human tragedies from which we cannot turn our eyes away or close our ears.”

Stratton and Henry showed photos and videos that demonstrated the impact of mining by Canadian companies in Ecuador, El Salvador, the Philippines, the Democratic Republic of the Congo and in some of Canada’s indigenous territories.

They include the killing of local activists opposed to mining─allegedly by paramilitary groups supported by companies─the rape of women in communities struggling with mineral wealth conflict, cyanide leaching that has polluted drinking water,  and the displacement of communities from land they consider sacred. In Canada, First Nations people have not seen the economic benefits promised them by some resource explorations, and they now worry about the loss of their traditional livelihood, said Stratton.

“The cost for materials that go into our cell phones” and other objects “are enormous,” added Stratton.

What the snapshots of experiences convey is the reality that “resource companies are able to change environmental law, and work their way around constitutional responsibilities and human rights,” particularly in countries with less rigourous legal systems, said Henry. Some victims have sought accountability in Canadian courts but have had no luck, she added.  Henry urged the assembly to ask, “Is this living with respect? Is this right relations? Is this our biblical mandate?”

Before the resolution was presented, Stratton led the assembly in a simple exercise that was meant to bring the issue home. She asked members to take out of their pockets, hands and vestments “anything that was derived from resource extraction” and to consider what these objects mean to them and reflect on where they came from. In most cases, people don’t know where they come from or whether what they possess is made with conflict-free minerals, she said.

Johnson, for her part, spoke about the “stories of impact, the struggles to secure safe water” when she visited communities affected by resource extraction in Argentina and Colombia. “Their problems are our problems,” she said, noting Canada’s long history of resource extraction and its strong participation in the global mining economy. “We have a particular calling on what it means for resource extraction to be responsible, ethical and fair.”

At the last Sacred Circle of the Anglican Council of Indigenous Peoples, Johnson said she heard testimonies of aboriginal people’s “deep connection to land” and how “the choices we make about how we engage with land and resources” affect them in many ways.

Hiltz spoke about the “moral responsibility” that people of faith have to protect and uphold the environment. Responsible resource extraction calls for compliance with international standards of environmental practices and declared human rights conventions, he said. It means that companies must respect the right of communities to free, prior and informed consent with regard to resource extraction, and they must pay attention to methods that are “least destructive to ecological balance,” and the condition of land, waterways and air after they leave a community. It also calls on churches and all members of society to be accountable for their own behaviour and consider “how lives are devastated” to meet their own personal demands for goods.

Approving the motion is “about doing our part to bring about those very things for which we pray,” said the primate. “May we discover new ways of sharing the goods of the earth, of struggling against exploitation, greed and lack of concern.”