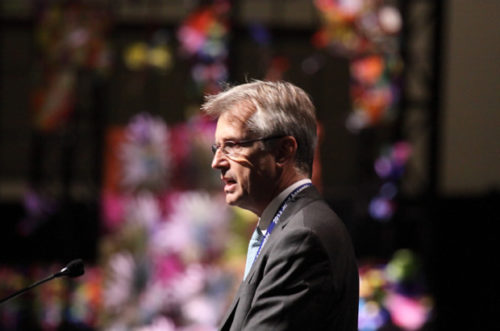 [Anglican Journal] The head of the World Council of Churches (WCC) says the Joint Assembly is a hopeful witness to the wider church.

WCC General Secretary Olav Fykse Tveit brought greetings to Anglican and Lutheran delegates, calling their joint national gathering “a sign for all of us that it is possible to see our dreams come true and our way forward be open for us.”

“In this way you call other churches towards the way of unity, mutual accountability, and ministry together,” Tveit said.

The Anglican Church of Canada has been a member of the WCC since the council’s creation in 1948. The ELCIC joined when the denomination was formed in 1986.

“It’s good for us to be reminded of that great world family of churches of which we are member churches,” said Archbishop Fred Hiltz in response to Tveit’s address.

Both the Anglican Church of Canada and the Evangelical Lutheran Church in Canada will send delegations to the WCC’s tenth assembly in Busan, South Korea, this fall.