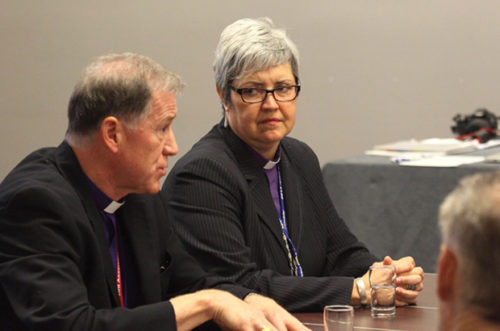 [Anglican Journal] Anglican and Lutheran leaders in a press conference today expressed hope that their historic joint assembly here will open up possibilities for more partnerships among their churches around areas such as theological education, social justice and mission work.

“I’m very hopeful that this assembly is going to rekindle some of the absolute joy that was ours in 2001 when we declared full communion between our churches,” said Archbishop Fred Hiltz, primate of the Anglican Church of Canada. “I’m hopeful that we’ll rekindle that in such a way that it finds expression in every widening circle in the life of our churches.”

Evangelical Lutheran Church in Canada (ELCIC) National Bishop Susan Johnson said she would like to see churches “come away from this gathering with a commitment to missional focus” and inspired to “begin working in partnership in their communities.” Johnson noted that while there are places across Canada where full communion relationships are “alive, well and thriving,” there are others where they haven’t taken root.

In response to a question about why there were fewer delegates than had been anticipated─from an initial estimate of 800 to about 600─Johnson acknowledged that attendance has been less on the Lutheran side. The assembly is longer than usual for Lutherans with an extra day added and that increased the cost for many parishes, which cover the cost of coming to the meeting, said Johnson. “There are many that are struggling and financially chose not to send a delegate.” (Close to 300 Anglican delegates have registered, and about 275 Lutherans.)

Johnson also said the departure of several ELCIC congregations has “also dropped the delegate pool.” A number of churches, mostly from the Alberta synod, left the ELCIC when its 2011 National Convention approved a motion allowing pastors to preside at or bless legal same-gender marriages.

Hiltz, for his part, referred to the resolutions committee when asked whether General Synod would entertain a motion that seeks to “prepare and present a motion at General Synod 2016 to change Canon XXI on Marriage to allow the marriage of same-sex couples…”

This motion does not call for a discussion around the marriage canon or the blessing of same-sex unions.

Meanwhile, Hiltz also said he was hopeful that the Joint Assembly would encourage Anglican and Lutheran churches “to keep looking outward,” adding that “we’ve spent a lot of time consumed with our internal life. The Spirit is calling us to look out into the world that longs for gospel, peace and justice.” The assembly theme, Together for the Love of the World, “speaks to that,” he said.

In a separate interview with the Anglican Journal, Hiltz said that in coming together for a joint meeting, the two churches are sending a message of hope, of “working more closely together in service of God’s mission” and of “looking out into the world, trying to figure out where God is at work in the world and running out to meet God and be co-workers of God.”

As for the meeting of General Synod, Hiltz said he would like to see members have a sense that the Marks of Mission “have taken hold; they’re in the heartbeat of this church now,” and that its strategic plan, Vision 2019, “is rolling us forward.”

Hiltz also said it was too soon to assess what possible financial impact fewer delegates at the assembly might have.