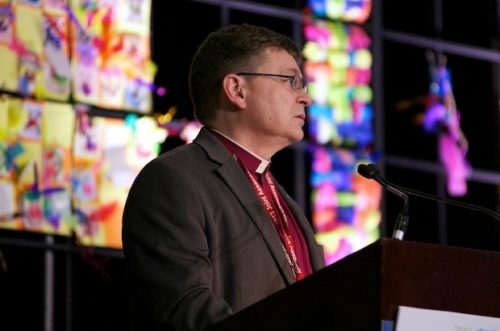 [Anglican Journal] After some debate, General Synod members on July 4 voted to abolish all but two of the national church’s standing committees, as part of proposed changes to its governance structures.

The house of bishops and the clergy and laity approved, by a two-thirds majority, Resolution A041, amending Section 39 of the General Synod Handbook, to allow the pension committee and the financial management committee to remain as standing committees and five others to function as co-ordinating committees.

Archdeacon Bruce Bryant Scott, of the diocese of British Columbia, spoke out against the motion, expressing concern that “the process that produced this proposal has been too narrow and insufficiently consultative.” He questioned whether dioceses and bishops were consulted, and raised concerns that proposals were being presented as “fait accompli.” Restructuring “is too important to rush,” he said.

Bryant Scott urged members to defeat the motion, adding that it would also result in “more top-down decision making” and concentrate “more power in the centre.”

Jennifer Warren, of the diocese of Nova Scotia and Prince Edward Island, spoke in favour of the motion, saying her own diocese has moved in the direction of streamlining committees. “Change is always scary, and there is respect for the fear of the top having more control than we might like,” she said. But Warren added that her diocese has seen the opposite: restructuring and fewer face-to-face meetings actually encouraged more lay people─who don’t have time to travel—to volunteer and be involved in the church’s work. Restructuring “frees up more funds to put our money where our mouth is—mission, mission, mission,” she added.

Before voting on the resolution, the recommended changes were presented by the diocese of Toronto’s Archbishop Colin Johnson, a member of the structures working group appointed by Archbishop Fred Hiltz, primate of the Anglican Church of Canada.

“How we meet together is evolving,” said Johnson, adding that all national church gatherings need to be considered. The idea is not to make all meetings web-based, but to have a mix that includes face-to-face meetings. He noted that a single meeting of the Council of General Synod (CoGS) costs about $30,000.

The increased use of technology allows greater consultation and timely decisions,  Johnson added, and results in fewer costly meetings.

Dean Peter Elliott, of the diocese of New Westminster, explained that the pensions committee was kept as a standing committee “for reasons of fiduciary responsibilities,” while the financial management committee “has a great deal of work before it.”

Reducing other standing committees to co-ordinating committees does not mean “they’re not of value” or that their workload is not substantial, but that a new way of doing things “differently” is being opened up, added Elliott.

General Synod members are set to consider other recommendations put forward by the structures working group. They will be asked to adopt a resolution to receive the report of the group, Embodying God’s Call, and commend it to the Council of General Synod “as a guiding document in moving forward with the structural renewal of the Anglican Church of Canada.” Members had voted to table this resolution, until they had dealt with Resolution A041.