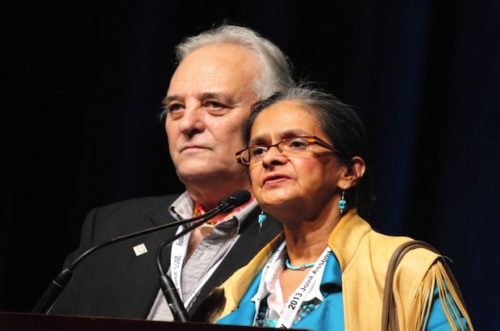 [Anglican Journal] Annie Smith-St. Georges, an Algonquin elder, and her husband, Robert St. Georges,  officially welcomed the members of Joint Assembly to Ottawa, which is in the territory of the Algonquin First Nation. The evening session also included a reflection from the Rev. Jamie Scott, who has worked to support the United Church of Canada’s participation in the work of the Truth and Reconciliation Commission for a decade.

Smith-St. Georges welcomed those who had travelled “from the North, East, South and West to the Algonquin territory, the land of my ancestors.” She spoke of how her ancestors had welcomed newcomers to the land with open arms, as she was now doing, and she also spoke of the ways that aboriginal people are still suffering in many ways from the impact of the arrival of the people her ancestors welcomed.

Scott’s reflection expanded on that theme. “I suspect that, like me, many of you didn’t learn anything about Indian residential schools in the classroom. There has been a great silence in this country about them,” he began. “But for the past 10 years I have had my heart broken, and broken open, by listening to the experiences of former students and their families,” he said, describing the damage former students suffered─as children, they were torn away from their families, and lost their language and culture; many were abused emotionally, physically and sexually. “So many lives [were] devastated by experiences of humiliation, rejection, trauma, loss, confusion, fear, anger and despair. How can we possibly make this right?” he asked.

But Scott’s ministry has focused on reconciliation. Two fundamental teachings have guided him, he said: the advice of his Anglican friend and mentor, Canon Laverne Jacobs, that “it’s all about relationships”; and the teaching of Jesus in Matthew 5:23−24 that people should reconcile with their neighbours before offering gifts at an altar.

As the TRC nears the end of its mandate, Scott asked if the churches will make a long-term commitment to healing and right relations? Time is short to create the foundation for a new relationship between aboriginal and non-aboriginal people, he said. And he urged the churches not to miss the opportunity to play a redemptive role in the healing of the nation. “For it is in the transformation of our relationships with those that we have hurt, that we become whole,” he said.