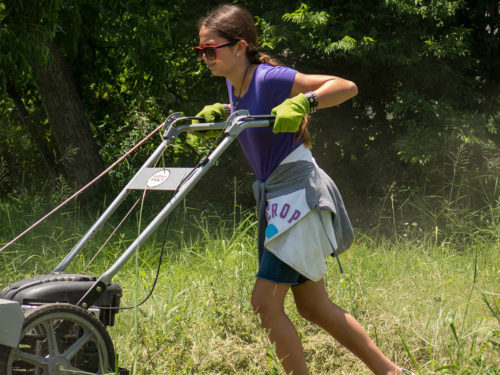 [Diocese of Texas] When Christ Church Cathedral Youth Minister Jeremy Bradley decided to schedule a mission trip for fifth graders, he knew that the Cathedral Urban Service Experience (CUSE) was as good an opportunity as any. CUSE is a Cathedral program in Houston that accommodates youth groups from churches as far away as Baton Rouge, Louisiana, and “provides opportunities to serve persons who are being denied justice, peace and dignity by their community.”

“One of the reasons why I start the younger kids off in Houston is because I think it is important to let them know that there are things to do locally,” Bradley said. “We don’t have to go to some foreign land or travel across the country in order to do mission work. It is right here in our backyard.”

On a typical CUSE trip, youth groups stay in the Ballard Youth Center and travel around Houston using public transportation to eat local food and explore parks and museums. They wake up early to volunteer with organizations like The Beacon, Star of Hope, Generation One, Lord of the Streets, Bering Omega and The Way Station.

The Cathedral fifth-graders stayed for a weekend with CUSE in mid-June, feeding the homeless, mowing a deserted lot in the Third Ward, and helping at the food bank. When not lending a hand, they walked down to an Astros game and visited Schlitterbahn in Galveston.

“I was expecting we would just hang out and have a lot of fun,” said 11-year-old Elodie Giles. “We got to do that and help a lot of people too. I’m really pumped about this whole thing even though I worked really hard because it was really fun and really rewarding.”

At one point the kids visited an art garden, which features a mirror box with three holes. Two of the holes feature a mirror, but the third hole doesn’t. The fifth graders felt that piece of art represented their experience with CUSE.

“When you look into one hole, you are expecting to see a reflection, but instead you are seeing a whole new perspective,” Giles explained. “So we thought it represented the work that we are doing … Some people live in luxury and they couldn’t imagine that anyone would live any way different. But sometimes you don’t have a choice.”

According to program director Nikki Blount, this new perspective is just the beginning of what she hopes CUSE can spark in young people.

“One of the kids from another group in Houston said ‘I’ve lived in Houston my whole life, but I feel like I never knew my own city,’” Blount said.  She hopes that revealing the plight of others and exposing kids to new environments will open the hearts of youth to service.

“I don’t want this to be a life-changing, one-time mountain top experience,” she said. “I want this to be part of an overall systemic change. I want service to be a part of their overall daily lives, and I hope that this kind of kick-starts that.”

“CUSE is a wonderful program,” Bradley said. “It doesn’t push any certain belief on anybody, which I think is good, because the sole focus is being a servant for somebody.”

– Luke Blount is staff writer and communications specialist in the Episcopal Diocese of Texas.This story first appeared in the Christ Church Cathedral’s The Bulletin. Learn more about CUSE here.