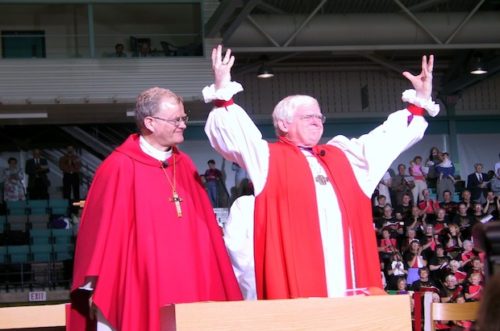 [Anglican Journal] Anglicans and Lutherans have been in dialogue since the 16th century, when two denominations emerged as major players in the Reformation. But for Archbishop Michael Peers, primate of the Anglican Church of Canada, 1986–2004, the Lutheran-Anglican connection dates back, in a concrete way, to 1969.

At the time, Peers was rector of St. Bede’s, a small suburban church on a strip of stores and gas stations in the direct flight path of planes using Winnipeg’s airport. “We were approached by the even smaller Lutheran church about renting space in our building ” he recalls. “Instead, we decided to go to joint ownership of the Anglican church, which offered more space and facilities, and we became co-owners of the Mount Royal Christian Centre.”

Today, that early move to common ground lives on in the joint parish of St. Bede’s Anglican and St. Stephen’s Lutheran churches, served sometimes by an Anglican priest, other times by a Lutheran pastor.

Smoothing the amalgamation, back in 1969, was the origin of St. Stephen’s as a daughter parish of an Icelandic Lutheran church. The Scandinavian tradition of Lutheranism, Peers points out, is close in structure and worship to Anglicanism. “People on both sides quickly discovered that they recognized the other as church,” he says. ‘The liturgy, the order, the bishops are all similar, whereas the German Lutheran tradition of worship and church life is quite different.” The Lutherans, however, sang more of their liturgy than did the Anglicans, he recalls.

The forging of the Lutheran-Anglican bond was facilitated by the winds of liturgical reform that swept Christian churches from the Roman Catholic to the United in the last century. “There was a great convergence,’ says Peers.

Nevertheless, there was no lack of stumbling blocks to Anglican-Lutheran communion. One of the issues centred on whether Lutheran bishops were bishops for life, even after retirement, as their Anglican counterparts are, or whether that status expired with their elected terms. “Were they prepared to say you remain a bishop?” says Peers. Did a bishop’s Stand (German for status) survive his Amt (elected office)

“Anglican bishops stand in historic succession going back to Gregory XII,” says Peers. They share this ancestry with the Lutheran churches of Sweden and Finland, which the Church of England has recognized as sister churches in communion since the 1930s.

The question was resolved in a typically low-key Canadian way: it was simply agreed that every bishop would be a bishop for life. Some in the Anglican camp still had misgivings because historic succession was a cherished concept. What won the day was a simple test question: Is this a church—rather than are the ordinations right? “The Anglican Church of Canada took the position that if we look at a church and agree that it is church across the broad spectrum of Christianity and it’s episcopal in structure, then we say that its bishops and pastors are recognized as being what they say they are,” says Peers. “Our approach was based on observed reality.”

In this the Canadians followed the flexible principle of interpretation and application of church canons that the Orthodox Christian Church calls oikonomia. “This tradition allowed them to work around potentially huge ‘tiresomenesses,’ ” says Peers.

Waterloo 2001 recalled
Anglicans my be known for their liturgy and Lutherans for their preaching, but at the 2001 service celebrating the adoption of the Waterloo Declaration, the specialties were reversed. Bishop Telmor Sartison, national leader of the Lutheran church, presided over the service, while Archbishop Michael Peers delivered the sermon. The celebration took place in a hockey arena, “but it was much more than a hockey game,” says Sartison, who the second national bishop since the formation of the Evangelical Lutheran Church in Canada. There was no formal pulpit, but preach Peers did—to about 1,000 people—on the meaning of the eucharistic command “Do this in remembrance of me.”

After the two sides had almost unanimously voted to enter full communion, a gigantic loaf of bread was brought up from the back, along with a huge carafe of wine. Waiting at the door to shake hands as people left, the two bishops decided it was time for a sign of the new common ground, so they both started dancing to “Siyahamba” (“We Are Marching in the Light of God”), the closing hymn. “We danced pretty well,” recalls Peers, “but of course expert in this is Desmond Tutu.” Adds Sartison: “I’ve danced all my life but Michael was much better.”