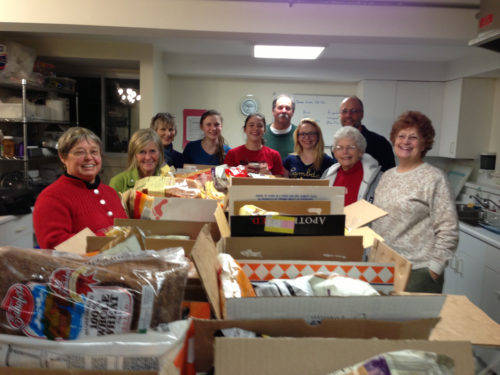 [Risen] This year, St. Augustine’s Episcopal Church in Kingston, Rhode Island, has been busy. The congregation discovered hunger in an unlikely place and found it an opportunity to get outside church doors and care for their next-door neighbors, the students of the University of Rhode Island.

It started one week at St. Augustine’s coffee hour when Eileen Holovac and Catie Chatowsky listened to a presentation by the director of the Johnnycake Center of Peace Dale, an Episcopal Charities grant recipient. At the time, the two URI students were taking an honors course on “Hunger & Poverty in America.”

Holovac and Chatowsky were inspired by the Johnnycake Center and wondered about the need for food on campus. They particularly were concerned about students with limited resources who were not able to go home during spring break. What does one eat when the dining halls are closed?

Working with St. Augustine’s priest-in-charge, the Rev. David Dobbins, and Archdeacon Jan Grinnell, they met with URI representatives who agreed this was indeed an issue for a largely unseen population of students. The Jonnycake Center then agreed to provide food for an initial try at a food pantry. In early March, students and parishioners gathered to assemble 35 boxes of food, each box designed to support a needy student with a week’s worth of meals.

Word spread like wildfire when announcements were made by the students through Facebook, e-mail and campus-based web pages. When spring break came, 63 students arrived in need of food, and in the spirit of the Gospels, food meant for 35 covered everyone.

The food pantry is just one example of a larger initiative at St. Augustine’s to serve the student community better. The church also has been holding monthly “feed a friend” dinners where parishioners cook students their favorite meal. There have been “liturgy to go” events outside the student center, such as when parishioners offered prayer cards with ashes on Ash Wednesday and with hot cross buns at the end of Lent. 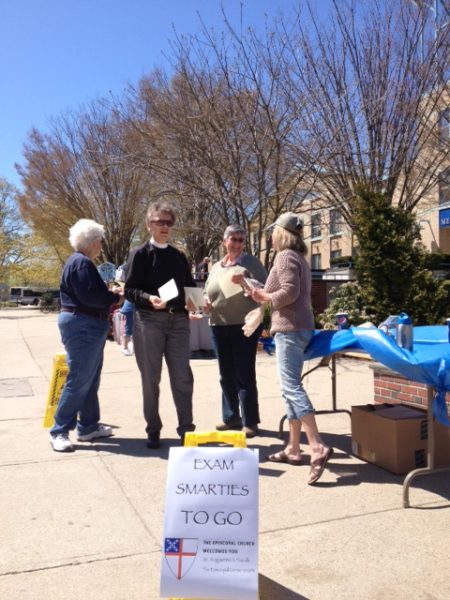 During exams, St. Augustine’s Episcopal Church members handed out Smarties and
prayer cards to students at the University of Rhode Island.

During exams, St. Augustine’s handed out Smarties to go. The stressed students especially appreciated the attached prayer card; though no one has heard how the venture affected exam scores, a few students have posted thank you notes on the St. Augustine’s website.

The positive seeds planted in the community are immeasurable, Dobbins said. “People are talking about what we are doing and respecting our commitment to the students.”

As for church attendance, at least two URI staff members and five students are now parishioners.

What’s next? St. Augustine’s is in the process of planning a welcoming event for the students’ return in the fall.

— Ruth Meteer is editor of Risen magazine in the Diocese of Rhode Island, where this article first appeared in the spring issue.