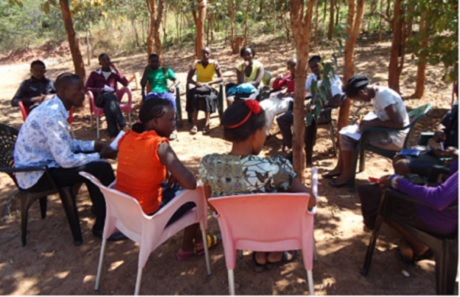 Teenagers from the Diocese of Lusaka discuss how to make church more relevant to them and their peers. Photo: CPCA

[Anglican Communion News Service] Disillusioned teenagers in the Zambian Diocese of Lusaka have decided to run their own church services after feeling disconnected from adult-led ones.

According to the Rev. Robert Sihubwa who oversees the national church’s youth ministry, the teens said neither the sermons, hymns, nor the leadership were connecting with them.

Sihubwa explained, “One girl said the sermons preached in church focus largely on old people. She said, ‘You always talk about family, money, problems in the world, changing the world, etc. Our concern is about dressing, music, fashion, girl and boyfriends, whether it is right to kiss or not, and school.’

“According to the youths, such concerns never get addressed [in regular services], apart from general condemnation for fashions and music.”

Sihubwa said that church leaders also came under fire, with one teen saying, “The bishop’s visitation to parishes only connects with the teenagers during the confirmation service. It is rare that bishops will make a specific visit to teenagers in a parish; it is as if we don’t exist.”

The comments were made at the diocese’s first ever camp for teenagers, which was an initiative that had come from the young people themselves.

“The camp was full of life, singing, jokes and dancing into the night, with most of the young people being forced to [go to] sleep,” said Sihubwa. “Their energy was amazing as they woke up early in the morning at 0600 hrs for devotions and to learn how to have Morning Prayer.”

The program was largely directed by teenagers, taking the roles of worship leaders, ushers, intercessors, sports coordinators, catering helpers, and some even acted as counselors to their friends.

The call for greater recognition for teenagers in church life came out of group discussions where youngsters were invited to say how they believed church could be improved.

“After the discussion, a consensus was reached that we start Teen Fellowships that would meet on Saturdays or during the week to address the issues raised,” said Sihubwa. “When we returned [home], the teenagers in my parish asked to start a Teen Church, at least once a month, parallel to the main service.”

[Editor’s note: This story is from material in the latest edition of Witness6.7, the newsletter of the Anglican Communion’s Anglican Witness – Evangelism and Church Growth Initiative. To read it visit http://aco.org/ministry/mission/ecgi/newsletters/index.cfm]