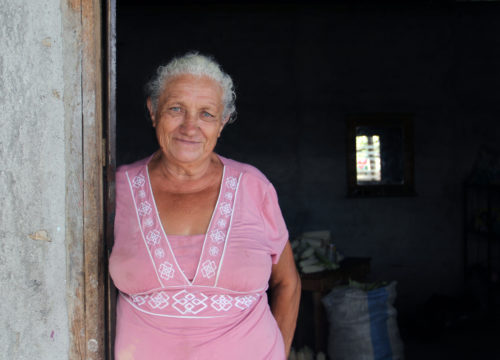 Carmen Milagro Flores, a community leader in La Anemona, stands in the doorway of her home. As a leader, Flores says she feels responsible for other members of the community. Photo: Lynette Wilson/Episcopal News Service

They live in shacks constructed of tin, mud, discarded construction materials and sometimes building materials salvaged from their previous homes. Heavy rains and mudslides caused by Hurricane Ida in 2009 washed away the ground and in some cases their homes out from under them. The people fled in the night as the storm gained strength and homes crumbled off cliffs into a ravine. A 2-month-old baby, her mother and grandmother were buried alive, along with an elderly man whose body went unrecovered.

After the storm, the families, united by 36 years of living in community, decided unanimously to move to the abandoned strip of land, which lacked basic services – water, sanitation and electricity – thus joining a much larger population of 10,000 landless people living along the bustling highway. They called the community La Anemona, or “the anemone.”

“We came here when we saw our land was disintegrating because, if there would have been a tremor or an earthquake, it would have destroyed our homes,” said Carmen Milagro Flores, a community leader. “This was the only unoccupied piece of land.” 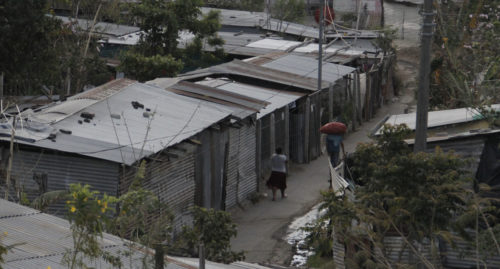 The people of La Anemona moved to this narrow strip of land between the bustling Pan-American Highway and an abandoned government grain-storage facility in 2009 after heavy rains and mudslides destroyed their hillside community. Photo: Lynette Wilson/Episcopal News Service

Some 2 million Salvadorans, a third of the country’s 6.1 million people, live in substandard housing in some 2,500 informal communities. They are people internally displaced by war, natural disasters, violence and economic hardship who have built shacks alongside roads and polluted streams, behind commercial shopping centers and on dangerous hillsides.

For those who fled Ida’s effects, “This is the second time in their lifetime that they have been displaced,” said Noah Bullock, executive director of Foundation Cristosal. “The first time was during the civil war.”

Foundation Cristosal is a human rights-based community-development organization with roots in the Anglican and Episcopal churches. It has worked with La Anemona to legalize electricity, introduce potable water, build a community center and, more recently, to start a savings-and-loan cooperative for women.

“The case of La Anemona is emblematic of the historic displacement of the poor,” Bullock said. “Displacement and poverty have pushed the people toward the margins, forcing them to live in places unsuitable for housing, which keeps them vulnerable and prevents them from achieving stability in the basic things like where they live and how they make their livelihood.” 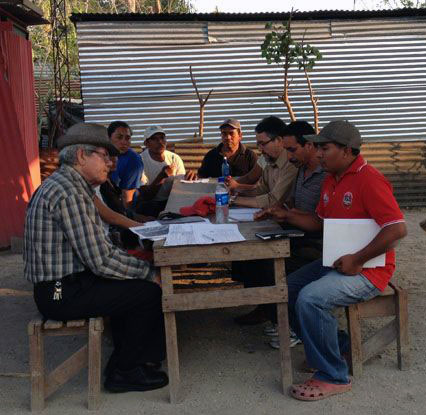 In March, José Oswaldo Lopez, third from right, one of Cristosal’s lawyers, and community leaders from La Anemona met with David Rodriguez, left, a delegate of the FMLN party, to discuss legislation to legalize the land on which the people of La Anemona live. Photo: Foundation Cristosal

Ownership of the land would allow community members to focus on building more stable lives for their families, said Blanca Estella Herrera de Yanes, 26, who hopes to provide such stability for her daughters, aged 5 and 9.

Without title to the land, she said, “We are usurpers.”

Poverty in El Salvador, Bullock explained, is part of a broader system of social exclusion – a condition in which populations, by being excluded from exercising their equal rights in society, are in effect systemically denied equal citizenship. Rather than invest in projects dependent on continued aid, Foundation Cristosal seeks to strengthen the ability of the poor to act for justice and development as equal citizens in a democratic society.

“In Anemona, the most important thing we have achieved is that the people and their government are talking,” he said. “The ultimate goal is the full recognition of the people as citizens of the state and their equal right to belong in El Salvador regardless of their situation poverty and landlessness.”

From the beginning, Foundation Cristosal has stood with the people of La Anemona.

“They were some of the first people that came, when we were most in need,” said Flores.

Others came to help as well, including a church that purchased a plot of land elsewhere for the community without the community’s consent in an area that was isolated, lacking a road and basic services, said Jose Manuel Muñoz, a community leader who also has led the charge in legalizing the land.

“That was when we decided to move forward with our action plan,” said Muñoz. 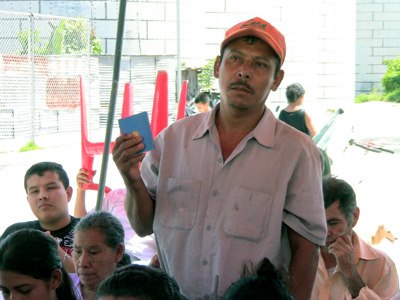 In the 1980s, a civil war fought largely over socioeconomic inequalities and lack of human rights raged in El Salvador. Here, a man holds up a copy of the 1986 constitution, which guarantees many of the rights fought for during the civil war but that oftentimes still are not granted today. Foundation Cristosal is working with Salvadorans to continue the fight for equal rights. Photo: Foundation Cristosal

Community leaders, with the assistance of a lawyer and a community organizer working for Cristosal, have written letters, organized meetings and submitted a legislative decree requesting legalization of the land. The decree, however, sits idle.

“The bill is in the assembly but has been archived, not voted on,” said Bullock. But he feels optimistic because the ARENA party made gains in the most recent municipal elections in San Martin, where La Anemona is located, and the FMLN party is looking to gain favor in advance of the February 2014 presidential election, he added. “Legalizing the land on which 10,000 people live would be a big political victory for them.”

From 1980-1992, El Salvador suffered a brutal civil war fought between its U.S.-backed, military led-government and a coalition of guerilla groups, organized as the Farabundo Martí National Liberation Front, or FMLN. The war was fueled mostly by the gross inequalities that existed between a small group of wealthy elites who controlled the government and the economy and the majority of the population that lived in poverty. Communities today continue to align themselves with parties on the right and left, benefiting depending on which party is in power. The FMLN party holds the presidency.

In cooperation with Foundation Cristosal, Bishop Martin Barahona of the Anglican-Episcopal Church of El Salvador has used his position to advocate for the community on legalizing ownership of the land and in negotiating the rights to water and electricity. 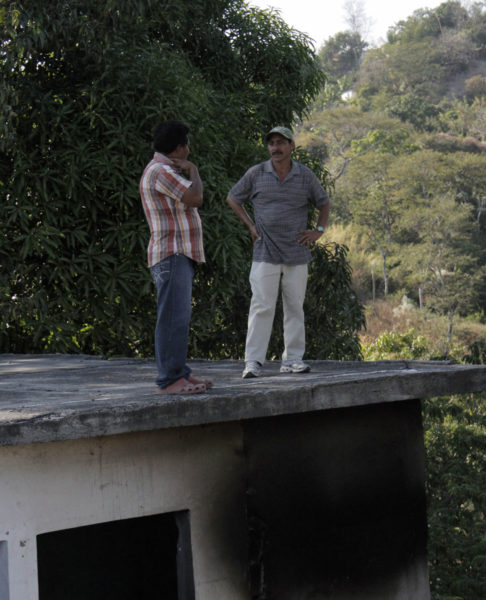 Jose Mauel Muñoz, right, and Benjamin Perez, residents of La Anemona, stand on the rooftop of one of the abandoned homes in the community where they’d live for 36 years. Hurricane Ida forced the people to abandon their homes in 2009. Photo: Lynette Wilson/Episcopal News Service

In El Salvador, natural disasters displaced 90,362 residents between 2009 and 2011, according to data compiled by the monitoring center. More than 88 percent of the total land area in El Salvador is considered at risk of natural disasters, and 96.4 percent of the population lives in these at-risk areas, according to the United Nations Development Program.

La Anemona’s people, say Flores and other community leaders, see themselves as victims of climate change. Since being forced to relocate, they have struggled to rebuild their lives and move beyond subsistence living.

“After the storm, the people had little recourse and were forced to decide between living at risk of death by mudslide or risk of being ostracized for living without land rights as squatters,” said Bullock. “The community felt like foreigners in their own country.

“With displaced people, the insecurity of place becomes a pathology and reinforces a sense of being less equal or having less rights than other Salvadorans. In a sense, displacement was a negation of full citizenship,” he said, adding that feeling insecure about housing perpetuates the cycle of poverty. 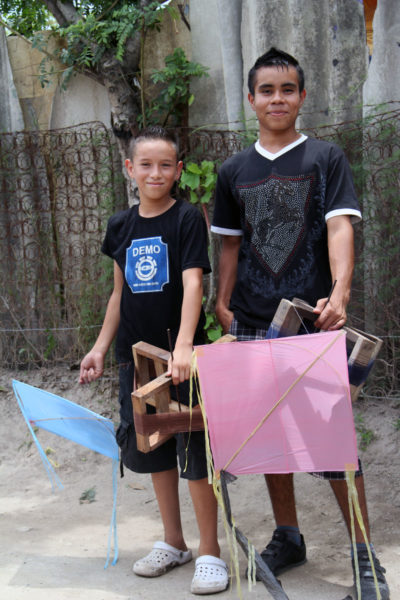 Kite fighting is a popular pastime for young people living in La Anemona. Parents say one of the challenges of raising children in the community is keeping them occupied and out of danger. The community is located in an area controlled by one of El Salvador’s most dangerous gangs. Photo: Lynette Wilson/Episcopal News Service

“It has to do with stability and the ability of a family to project their future life path. If you don’t have the security that you’ll live in that spot for five or 10 years, you can’t have a long-term perspective. You live day-to-day, you don’t want to invest in your house or in things that you could potentially lose tomorrow.”

Five people led the charge to claim the land along the highway, first surveying it and staking out 10-meter by 10-meter plots for each family. For 22 days, the leaders pounded their stakes and policemen pulled out the stakes and demanded to see a permit to be there.

The leaders didn’t balk. Once the families had built the walls that would become their shacks, the policemen stood down and haven’t threatened to raze the community. Still, the residents live in fear, said Flores. Fear of being thrown off the land makes it hard to sleep at night, and, as one of the community’s leaders, she feels responsible for the others, she said.

“We have faith in God that one day they’ll give us this land,” said Flores. “It’s not big, but we’ll take what we can get. It’s not safe to be on someone else’s land.”

— Lynette Wilson is an editor and reporter for Episcopal News Service. She temporarily is based in San Salvador, El Salvador.