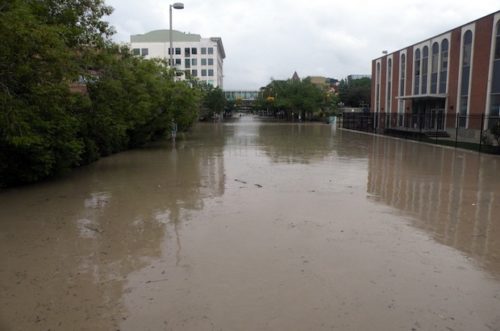 A portion of MacLeod Trail, a major road in downtown Calgary, under water during the worst flooding that Alberta has seen in decades. Photo: Resolute/Wikimedia Commons

[Anglican Journal] Anglican Diocese of Calgary Bishop Greg Kerr-Wilson has urged members of his diocese to reach out to individuals and congregations who have been affected by the severe flooding in Southern Alberta.

Three people have been killed and at least 100,000 have been displaced by the worst flooding the province has seen in decades, according to the RCMP. “I am certain you already have been praying, but I would encourage you to persevere in that prayer for all who have been affected; remembering particularly those who have died, and for strength for those who are working to manage this crisis, particularly our emergency workers and civic leaders,” said Kerr-Wilson, in a pastoral statement.  The statement was to be read in parishes across his diocese during services last Sunday.

Kerr-Wilson noted that the massive flooding has resulted in the evacuation of tens of thousands of people, among them members of Anglican parishes.

“As you will likely know from news reports, High River, Canmore, parts of Calgary and surrounding areas have been particularly affected, but others in various centers downriver are also affected and under threat,” he said.

In an initial report to clergy and lay leaders in his diocese, Kerr-Wilson noted that the places immediately affected by the flood have been Banff, Canmore, Okotoks and High River, outside of the city of Calgary, and Cathedral Church of the Redeemer, Christ Church and St. Edmund’s Bowness, inside the city.

“I know that many of our folks have been doing what they can to help; offering shelter for evacuees, providing food where needed, and volunteering time and energy to alleviate the impact of the crisis,” noted Kerr-Wilson.

He urged the faithful to continue offering their help, saying that recovery and cleanup efforts would take weeks. “It will be a time of hardship, anxiety and frustration for many. It will be a time when many will need help, encouragement and support,” said Kerr-Wilson. “Together as a diocese we will need to determine what it is that we can be doing to take our part in giving flesh to our Christian call to love your neighbor.”

The primate of the Anglican Church of Canada, Archbishop Fred Hiltz, has also issued a statement assuring Albertans of “the prayers of the church across Canada.” Hiltz urged Anglicans to remember those who have lost loved ones and also those who are providing support and counsel to victims.

“I think as well of clergy who will be drawing communities together, praying for the waters to recede and for the success of recovery operations and the labors of city officials, public servants and town managers to restore the flooded areas,” said Hiltz. “Please know my heart pours out to one and all. May God give you strength to meet the days ahead and hope to see beyond them.”