[Episcopal News Service] It’s one thing to practice piano duets in the parlor when no one’s home to hear. It’s another when your tunes, and possible missteps, reverberate across town.

“When we practice on the main instrument, somebody always is listening,” says Lisa Lonie, carillonneur at St. Thomas Episcopal Church in Whitemarsh, Pennsylvania, and at Princeton University in New Jersey. She recently launched a carillon duet concert series with Janet Tebbel, carillonneur at two carillons in the Germantown section of Philadelphia and organist at Emmanuel-Resurrection Episcopal Church in the Holmesburg section of Philadelphia.

“Certainly we can do it on the practice console, but eventually you have to get upstairs, where the fine tuning is done,” Lonie said, adding, “Nothing shuts down a carillon faster than an irate neighbor.”

The stamina required to hit the wooden batons, or keys, that pull wires to move the heavy clappers that strike a carillon’s bells also limits practice time in a way musicians playing many other instruments don’t face. The players strike the keys with their fists and operate the heaviest bells using foot pedals.

“With other touring or duet partners,” Lonie said, “they can go in a sound studio and just practice together for hours. We can’t. We have like an hour, maybe an hour and a half max.”

A traditional carillon, according to the Guild of Carillonneurs in North America, is “a series of at least 23 tuned bells, played from a keyboard that allows expressiveness through variation in touch, and on which the player, or carillonneur, can play a broad range of music – from arrangements of popular and classical music to original compositions created just for the carillon.”

Among religious institutions, Episcopal or Anglican churches boast by far the most manually operated carillons – 37 – of any denomination on the continent. The oldest, Lonie said, was built in 1882 and resides at the Episcopal Church of the Holy Trinity in Rittenhouse Square, Philadelphia. 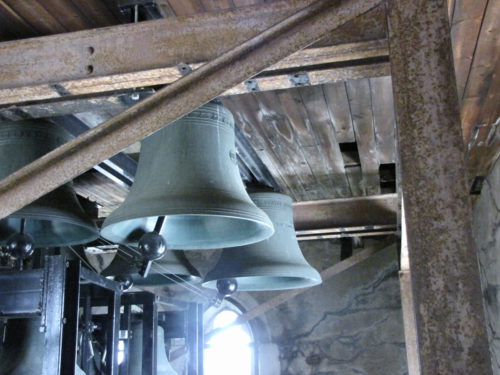 Every carillon is different, from the size and number of bells to the tower where they play. These are among the 49 bells composing the 18-ton carillon at St. Peter’s Episcopal Church in Morristown, New Jersey. Photo: Sharon Sheridan

Carillons differ from bell tower to bell tower, with different numbers of bells and a different ambiance in each location, Tebbel said. “There’s no two carillons that are totally identical.”

That makes touring a challenge, as the carillonneur must adjust to a different instrument and often a different number of notes in each location. “If you’re playing in an orchestra, you’re playing your violin that you know,” Tebbel said. “We don’t have that option.”

Tebbel and Lonie adapt their music as needed from carillon to carillon. They also can adjust the wires connecting the keys to the bell clappers to accommodate how hard they hit the batons and how loud they want the bells to sound.

As a performing duo, they can’t perform their program on the smallest instruments.

“We would not perform this program on less than four octaves,” Tebbel said. “Having more is fun, but … we would not be able to play with integrity with less.”

Added Tebbel, “There would be no differentiation between the two parts.”

For their current series, which began on St. Peter’s Episcopal Church’s 49-bell, 18-ton carillon in Morristown, New Jersey, on June 9, the duo played selections ranging from part of Sergei Prokofiev’s “Romeo and Juliet” to an arrangement of Camille Saint-Saens’ “Le Cygne (The Swan)” to a Disney medley.

A wide variety of carillon repertoire is available and continues to be composed, Tebbel said. “We have some amazing composers for carillon who are active right now who understand the overtone of a series of bells. The big thing with carillons … is the high bells are by definition quieter because they’re less metal. You have to play your lower bells quieter and less often, and the upper bells are more active. The normal disposition of music is, you listen to the top notes for the melody.”

For their concert, they chose from among about 40 different duets, she said. “A lot of the stuff is just arranged by various duos.”

The duets are fun, she said, “because normally it’s a very lonely thing when you’re up in the tower. You get no input at all. You can’t tell if they’re listening. Often you can’t even hear the applause. There’s some recital venues where people don’t bother to applaud; they just honk their car horns.”

That isolation offers an advantage, however, if the players wish to communicate during performances. During the concert at St. Peter’s, the duo counted beats, prompted each other and even apologized for a note played in the wrong octave.

“When you’re on stage, you can’t give those visual cues, and clearly those audible cues, or just laugh about it,” Lonie said. “That’s the fun of it, too. … I think it enhances our performance.”

“If something goes awry,” she said, she can “fake it” as a soloist. In a duet, “There ain’t no faking up there. We’ve got to keep it tight. That’s what ensemble playing is: It’s tiring, but also why it’s so much fun.” 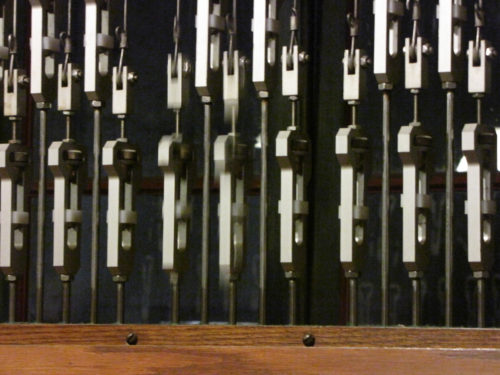 A carillonneur uses her or his fists and feet to hit wooden levers that pull wires attached to clappers on bells to make them ring. A player can adjust these wires, shown here, to accommodate how loudly the bells will play and the force used to move the clappers. Photo: Sharon Sheridan

Tebbel started out playing handbells and first tried the carillon while studying organ at the University of Michigan. She went on a tour of Europe, and “I was hooked.”

“When you’re in Europe, bells are part of your life,” she said. “They chime the hours, but they also chime out weddings and deaths and births and all kinds of stuff.”

She recalled a Belgian friend who, upon hearing a bell ringing, commented, “Oh, somebody’s been born.”

The carillonneur enjoys the “physicality” of playing the bells. “There’s a tremendous response … to your effort,” Tebbel said. “And there’s something about the timelessness of bells that has always gotten me.”

That “timelessness” also appeals to Lonie, a pianist who played handbells before learning the carillon.

“We’re just a blip in the life of these bells as players,” she said. “These bells last for hundreds of years.”

She recalled ascending a bell tower in Amsterdam to reach a 1562 carillon. “There’s a wall with all the carillonneurs of this ancient instrument. The bells were the same, but we’re just a blip.”

She also enjoys the way this musical instrument brings together a community. At the Morristown concert, people gathered on the church lawn to hear the concert but also listened from the booths of an outdoor art show across the street or while walking through town. “That’s fabulous,” Lonie said. “It’s a democratic instrument.”

The duo last performed a concert series on tour together in 1997. This year, they will play June 23 in Longwood Gardens in Kennett Square, Pennsylvania, where they performed together for the national carillonneurs’ guild in 2009 and where Lonie was featured on an NBC television special “Ringing in the Holidays at Longwood Gardens” and recorded her first solo CD, “The Bells of Christmas at Longwood Gardens.” 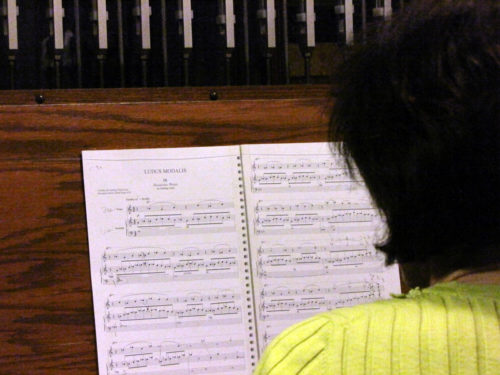 The series will continue in Pennsylvania at their respective churches – Tebbel’s First United Methodist Church of Germantown on July 16 and at St. Thomas on July 17 – and at Valley Forge Episcopal Chapel on July 18. Then they will travel to the McDonough School in Baltimore July 19; Chicago area bell towers, including Rockefeller Chapel with its largest bell weighing 18.5 tons, from Aug. 11-13; and Princeton University Aug. 25. They also hope to perform some recitals next year in Europe, when the World Carillon Federation meets in Antwerp, Belgium.

Carillonneurs play with different styles and repertoires in different places, Tebbel noted. “There is a North American sound.”

The duo have their own recognizable style. “It’s kind of like the Philadelphia Orchestra,” Lonie said. “It’s a Philadelphia sound.”

But while they have a sound, they still lack a name.

“We cannot come up with a good name for ourselves. There’s a challenge,” Lonie said, inviting creative suggestions. “There is time. We can adjust the program!”