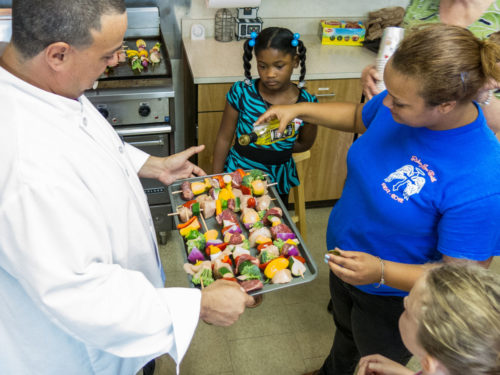 [Episcopal Diocese of Texas] In the Fall of 2012, Jimmy Graves saw the Rev. Robin Reeves at a Texas City business leaders meeting and knew that he wanted to see her kitchen at St. George’s Episcopal Church. Though she admits to feeling caught off guard, Reeves invited him to visit St. George’s parish hall. Graves, a former restaurant chef, had a vision for a children’s cooking class, teaching kids and their families to make good meals out of just about anything. And he was convinced the local Episcopal church was the place to make it happen.

“God told me we were going to have 30 kids in this place,” Graves said after seeing the facility. “I told Robin that, and she kind of looked at me like I was crazy.”

Though she didn’t exactly hear the same message, Robin was determined to bring new life into this aging congregation.

“I thought really?” Reeves said. “That seemed far-fetched, especially because it was hard to get in that kitchen. That and the altar are the two sacred places in this church. But I was trying to follow the organic way of God and listen to the spirit.”

Reeves and Graves formed a partnership for the Kids Cooking Club, a monthly class for kids and their parents. They work with the local food banks and grocery stores as well as generous parishioners of St. George’s to get ingredients.

In an effort to eliminate crime from the main thoroughfares near St. George’s, leaders in Texas City have worked hard to clean up the main streets in the town, putting up new lights and beautifying the area. According to Reeves, Graves asked the business leaders what the community could do besides sweep the crime under the rug. His idea was to help children of all backgrounds grow into better adults, knowing that their community cares about them.

“[This ministry] is about serving the latch-key kids, single parents and the families who shop at the food bank, because Jimmy was a latch-key kid,” Reeves said. “It was amazing because I had never thought of that.”

Graves now works as an account executive for The Post, a faith-based newspaper in Galveston County, but he admittedly has a checkered past.

“My life was in total turmoil,” Graves said, referring to his state of mind just two years ago. “I had a job and money, but in the past I had been homeless and had addictions. All of that didn’t make me turn to God, but on January 18, 2012, I woke up and was ready, and God threw me in.”

After much persistence from the newspaper owners, Graves joined The Fellowship Church in Texas City, and his perspective since then has completely changed. He has committed his life to following what God tells him, and the newly attentive Graves makes it clear that he hears God all the time.

“God put it on my heart to go back and start cooking and to do it for kids,” Graves said. “When I met Robin, God told me that’s the person I need to talk to about my cooking class.”

Graves leads his new life following this intuition, often not deciding his menu until just a few hours before the class. To organizers, this can sometimes be disconcerting, but the results speak for themselves.

When the program started, a few months ago, six children came–most of them related to Graves. But by Easter, the class had reached about 30 children along with their parents.

“Jimmy is like the town crier,” Reeves explains. The success of the program is largely due to St. George’s hospitality and Graves’ willingness to invite just about anyone he meets.

Chris Williams, a father of three, brought his family after parishioner Kent Ross invited him at a Chinese restaurant. Amazingly, Graves had also invited him the week before.

“Everything just kind of worked out perfect,” Williams said. “My kids love to cook and they love to eat, so I thought, why not?”

The kids and their parents arrive and sign in at noon and then make arts and crafts as Graves prepares the ingredients. Then, after a blessing of the food, “Chef Jimmy” demonstrates for the families how to prepare the food as they each make their meals together. Graves then cooks the food, and they all feast together.

“Its amazing to me how all the kids respond to Jimmy,” said Jean McKnight, St. George’s senior warden. “They will try and taste all kinds of things that my kids never would have eaten.”

St. George’s is a community that has been searching for a way to infuse some life and youth into their ranks, but had no idea where to start. For years, young families would visit but leave to find another church that had more children. Though the young families that attend the cooking class don’t usually show up on Sunday, there is new hope among the faithful.

“At least they are here,” McKnight said. “Some people think they should come to the service too, but maybe they will in a few months or next year when they are more comfortable.”

“My hope is to be a neighborhood gathering place and resource for the community,” Reeves said. “My sense is that the spirit is working organically. When I was in seminary, they told me the way to grow things is to look at where God is doing things and join in.”

For Graves, it is all about the chance to change a child’s life. “We are planting a seed with kids and letting them take it home to let God work,” he said.

— Luke Blount is staff writer and communications specialist in the Episcopal Diocese of Texas.