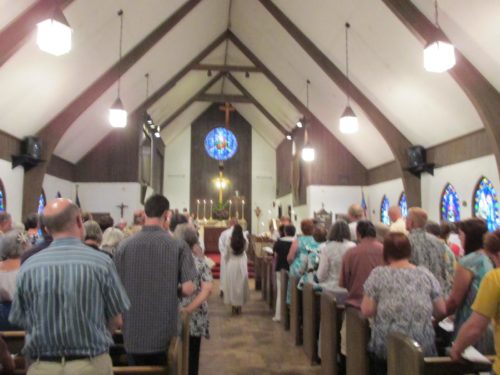 [Episcopal News Service] With the rap of his crosier on the church door and a trumpet fanfare, San Joaquin Bishop Chet Talton on June 9 formally ushered in the future of St. Francis Episcopal Church in Turlock. “We’re moving forward with mission, ministry and the work of reconciliation,” he said.

The standing-room-only gathering of about 150 sang “All are Welcome,’ a theme reflected throughout the homecoming festival celebration of the church, the first to be returned to the diocese after negotiated settlements with former members who left the Episcopal Church in 2007.

“We can now turn all of our resources to sharing the Good News of Jesus Christ and engaging in Christ’s mission in the world,” Talton said.

“At the heart of that mission is reconciliation. All are welcome. All means all, including those who differed with our churches and left; they are welcome. At center in our celebration of return is that we can devote ourselves wholly to mission and ministry.”

Vera Sahlstrom, who turned 94 a day earlier, said she couldn’t have asked for a better birthday present.

“I spent 30 years on the altar guild here and 30 years in the choir. I’ve got so many memories here. It’s good to be home,” she said.

Her grandson, Paul Voorhees echoed the sentiment: “I was born and raised in this church. It’s good to be home, it’s happiness.”

The Rev. Kathie Galicia, priest-in-charge of the congregation, said she received the keys to the church a week earlier and the returning congregation held its first service there June 2.

“It’s wonderful to have the church back,” she said. Overwhelmed by the support of visitors from across the diocese, she added: “This is like having a giant open house. I want to do this every Sunday.”

St. Francis members had worshiped in various locations the past six years, after theological differences split the diocese in 2007. Former members had left the Episcopal Church but had attempted to keep the property.

State and federal courts have consistently ruled that church properties are held in trust by the diocese for the mission and ministry of the wider Episcopal Church.

Returning Episcopalian Nedra Voorhees, 74, echoed an often-repeated sentiment that coming back to worship “felt like coming home. It was a strange sensation, when I walked in that first Sunday morning, it felt like I had never been gone.”

The congregation numbered about 40 at that first Sunday worship, she added. While meeting elsewhere, members had drawn sustenance, she said, from each other.

“It was a wandering and a soul-searching time,” she recalled. “My commitment to Christ was strengthened by not having that security that somehow a building provides for you. You come to rely more on your relationship with God than on a building … when you’ve got to do a lot more work to make it happen.”

She added that: “It’s an exciting time for the whole diocese, a turning point.”

Her sister Beryl Simkins, agreed. “It’s time to move on,” she said. “We need to be about being Christians in Turlock. We have learned so much from this experience. I learned that the people are the church.

“We’ve learned never to take the church for granted. We appreciate each other so much. Everybody helps these days. Everybody takes responsibilities and does whatever needs to be done.”

In Ridgecrest, where St. Michael’s Church was also returned to the diocese, the Rev. Linda Huggart said she’d just moved into the church rectory.

The congregation, which had been meeting as All Souls at the historical society building, was adjusting to returning to their property.

“If we can do it out of a box for five years, we can certainly do it in a church,” she said. “We’re kind of taken aback now that we’ve got pews and sound systems and organs.”

For Dee Dee Cox, 88, a long-time member, the return was joyous.

She said the church “was very precious to me. The church has meant a lot to me in my life here and my life in general,” she said. “So, it was difficult to be removed from it, but we carried on in a different way.

“Now, I’m feeling joyful,” she said but added that “it’s also sad. What happened was an unfortunate loss for both congregations.”

As the result of favorable rulings by the Kern County Superior Court, conversations are also underway regarding the return of other congregations in Bakersfield, Delano and Sonora. Other disputed properties throughout the diocese are in various stages of litigation, according to diocesan chancellor Michael Glass.

Another church property, St. Paul’s, Modesto, was returned July 1, 2009 prior to litigation.

“It’s been really emotional,” said Terrance Goodpasture, a St. Francis member since 2000. “There’s lots of enthusiasm that we’d like to keep going forward.”