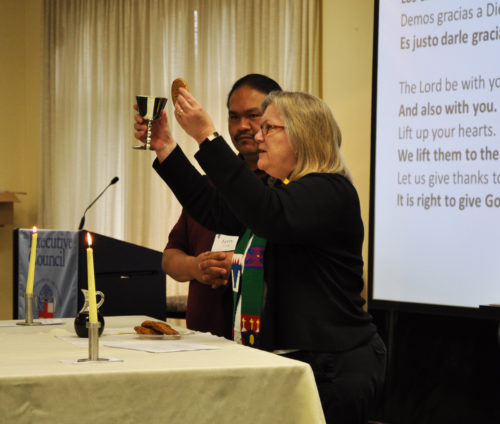 [Episcopal News Service – Linthicum Heights, Maryland] The Episcopal Church’s Executive Council agreed June 10 to increase the church’s aid to continuing Episcopalians in South Carolina and in the Diocese of San Joaquin, while also adding money to the budget of the Joint Nominating Committee for the Election of a Presiding Bishop.

Council also heard various reports on progress towards new initiatives that will be funded in each of the Anglican Communion’s Five Marks of Mission, according to goals General Convention set out in the 2013-2015 budget.

And council continued the process it has developed for formulating the 2016-2018 budget, which it must propose to the next meeting of General Convention in 2015.

Answering a request from the Episcopal Church in South Carolina, council agreed to expand a promised line of credit by $300,000, which will make available a total of $550,000 through the end of 2013.

Episcopalians in South Carolina have been reorganizing their common life since late in 2012 after Bishop Mark Lawrence and a majority of clergy and lay leadership said that the diocese had left the Episcopal Church.

In the case of the Episcopal Diocese of San Joaquin, council agreed to provide additional line of credit of $785,000 to be accessed through the end of 2014 to support the continuing diocese.

The reorganization in that diocese has been ongoing since late 2007 when a majority of the clergy and lay deputies to the San Joaquin diocesan convention took a vote purporting to realign the diocese with the Argentina-based Anglican Province of the Southern Cone.

Council established a covenant committee in 2011 to document work of the continuing San Joaquin diocese. That committee regularly reports to council’s Joint Standing Committee on Local Ministry and Mission. Council members at this meeting asked the presiding officers to appoint a similar committee to work with the Episcopal Church in South Carolina.

Facilitating the election of the 27th presiding bishop 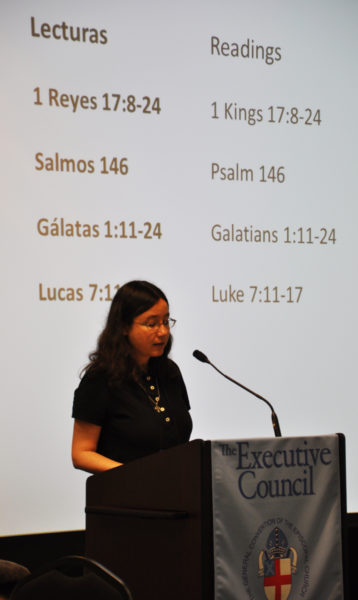 Council acted on two fronts to facilitate that process, a move that was needed because the 2012 General Convention added (via Resolution A-105) responsibilities to the work of the Joint Nominating Committee for the Election of a Presiding Bishop but the committee told council its funding, which has been reduced, is not adequate to do that work.

The 2006 meeting of General Convention called for $22,000 to accrue annually between 2007 and 2009 triennium to fund the nominating process and the 2009 General Convention designated an annual accrual of $10,000 during the 2010-2012 triennium, according to a funding resolution council passed on June 10. The 2012 convention set aside $630,449 to be distributed by council to all of the church’s committees, commissions, agencies and board (CCABs). Executive Council designated a $10,000 annual contribution for the nominating committee between 2013 and 2015, for a three triennial total of $126,000.

The committee has said that it needs $262,000 to meet the expectations of the revised canon. However, council’s Joint Standing Committee on Finances for Mission concluded at this meeting that that amount “would require more funds than we felt the church could invest in this particular task,” Ohio Bishop Mark Hollingsworth, FFM chair, told the council.

FFM proposed and council agreed to add $100,000 to the nominating committee’s budget. The addition will bring its total funding to $226,000.

Part of the difficulty in determining the cost of the new canonical expectations is that the lack of specificity about the tasks outlined revised canon, according to Steve Hutchinson, chair of council’s Governance and Administration for Mission committee.

The revised canon calls for the nominating committee to develop a process that would allow any bishop or deputy “to express the intent to nominate any other member of the House of Bishops from the floor when the committee presents its nominees to the joint session of the two Houses,” provide pastoral care for each nominee and his or her family and diocese, and determine and provide for transition assistance to the outgoing presiding bishop and the presiding bishop-elect. The first item would increase the amount of money the nominating committee has to spend on background checks beyond ones for those it nominates.

In addition, “there’s confusion about at what point the responsibility of this committee ends … and responsibility for other parts of transition and installation of the newly elected presiding bishop picks up,” Hutchinson told the council members, adding that “none of that is contemplated in this triennial budget.”

Hutchinson’s committee proposed to council – and it agreed – that it instruct Jefferts Schori and the Rev. Gay Jennings, House of Deputies president and vice chair of council, to appoint a committee to work with the nominating committee to plan, budget and oversee the transition work. There will be $20,450 available for that work, according to money annually set aside since Jefferts Schori was elected.

The proposals about how to target work around each of the Five Marks of Mission are being developed by teams made up of council members and church-wide staff that also consulted with people involved in such work throughout the church.

Jefferts Schori said during a post-meeting press conference that a “significant aspect of the meeting centered on the continuing development of work around the Five Marks of Mission.”

She highlighted the work of the Young Adult Service Corps and the possibility of developing “gap year” mission work for youth between high school and college or work, as based in the third Mark of Mission (respond to human need in loving service), and efforts by the offices of communication and government relations to develop an online platform for networking people involved at all levels of the church in work related to the fourth (to transform unjust structures of society) and fifth (to safeguard the integrity of creation and sustain and renew the life of the earth) marks.

Two or more of council’s five standing committees often met together during the three-day meeting to discuss mission work and other matters, and the Rev. Canon Michael Barlowe, the church’s executive officer, said that those gatherings “broke through some of the traditional committee boundaries.”

“This council is not waiting for this church to reimagine itself – or restructure itself – we’re already reimagining and restructuring ourselves as leaders of the Episcopal Church and in the broader communities,” Barlowe said during the press conference.

In a related matter, council members agreed with a recommendation from it Governance and Administration for Mission committee to form a group to “assure the effective, thorough and collaborative implementation” of 2012 General Convention Resolution A135, which among other things commits the church to a triennium of “teaching, preaching, organizing, advocating, and building mutually transformative relationships with those who are poor to focus our hearts and the mission of our congregations and dioceses on reducing poverty and increasing economic and racial justice.”

The members of the committee will include representatives of council and general convention committees, local faith-based organizations, church center staff concerned with domestic poverty and, where needed, outside experts.

“Just as A135 reflected a sea change on how we’re addressing domestic poverty, we’re also looking at new ways to coordinate that work,” Jennings said during the press conference, noting that at the last council meeting members called for similar coordination of the church’s response to convention Resolution B019, which reaffirmed the church’s commitment to just and lasting peace in the Middle East.

Bishops, deputies will be asked about ‘the ask’

Council member the Rev. Susan Snook, from Arizona, reviewed progress on council’s process for developing a 2016-2018 budget to propose to General Convention. She said that nearly all of the council and staff liaisons to the church’s CCABs have been trained in how to guide their groups through a “budget visioning process.”

The actual discernment envisioned by that process is beginning as well and reports are due by Aug. 16. Snook said the visions discerned in that process will be made available to the wider church.

Snook, who chairs FFM’s subcommittee on the budget process, said that she had been asked what a liaison should be if the group to which he or she is assigned is not interested in participating in the process. “I think that is very fine information for us to know as we go into the budget process, and will send its own kind of message, so please do convey that to your CCAB,” she suggested. “By the way, if somebody is not interested in doing a budget request, all the better.

As part of the budgeting process, Snook said, FFM wants to “engage the church in a discussion of the fact that not all dioceses meet their full asking percentage formula” to fund the churchwide budget. She noted that “there are no particular consequences for not meeting the full asking.

In the 2013-2015 triennium, the dioceses are asked contribute 19 percent of their annual income to help fund the churchwide budget. Each year’s annual giving in the three-year budget is based on a diocese’s income two years earlier, minus $120,000. The list of 2012 and 2013 diocesan commitments is here.

Council agreed with a FFM suggestion that bishops and deputies be surveyed on their ideas on how the asking process could be improved with the goal of greater participation in paying the full ask. The resolution also asks the House of Bishops to discuss the asking question during it fall meeting in Nashville.

In other business, the council:

* elected Rosalie Simmonds Ballentine, a former council member from the Diocese of the Virgin Islands, to serve as the Episcopal Church lay representative on the Anglican Consultative Council for a term to last for three meetings of that body. Ballentine was one of four nominees presented by the Executive Committee of Executive Council following a review of 11 applications, and she was elected on the third ballot. The other nominees were current council member Katie Sherrod of Fort Worth, Lawrence Hitt of Colorado and Thomas Little of Vermont. She succeeds Josephine Hicks, of North Carolina whose term expired at the end of the ACC’s most recent meeting in 2012 in Auckland, New Zealand.

Ballentine has “extensive experience in matters related to the Anglican Communion,” Jennings noted during the post-meeting press conference, including having spent six years as chair of the task forces on the church’s response to the Anglican Covenant and serving as chair the 2012 General Convention’s legislative committee on world mission.

* Awarded $535,000 in the latest round of Constable Fund grants. The grants fund mission initiatives that are not provided for within the General Convention budget. The fund received 22 applications totaling $1,621,452, and funded seven of those applicants. Details are here.

* Received a report and plan from the task force of the House of Bishops Committee on Pastoral Development related to 2012 General Convention Resolution A144 which calls for tracking the inclusion of women and other under-represented groups in episcopal elections. Council asked the presiding bishop to direct the Office of Pastoral Development to continue that work by first establishing a base line of all nominees in episcopal elections from available 2012 data, and then by tracking the ratios of all persons nominated for episcopal elections in 2013, 2014 and first quarter of 2015, and considered by diocesan search/nominating committees 2013, 2014 and the first quarter of 2015. Council’s resolution also asks that the office review the consistency and effectiveness of anti-racism training and other practices that inform search and nominating committees to issues of gender and ethnic bias and that necessary adjustments in transition process for episcopal elections be created, recommended, and monitored by the pastoral development committee. Council also asked the committee to consider including a letter with transition process materials that reminds diocesan standing committees and diocesan search committees of “the importance of authentic inclusion.”

A summary of all the resolutions council passed at the meeting is here.

The Executive Council carries out the programs and policies adopted by the General Convention, according to Canon I.4 (1)(a). The council is composed of 38 members, 20 of whom (four bishops, four priests or deacons and 12 lay people) are elected by General Convention and 18 (one clergy and one lay) by the nine provincial synods for six-year terms – plus the Presiding Bishop and the President of the House of Deputies.