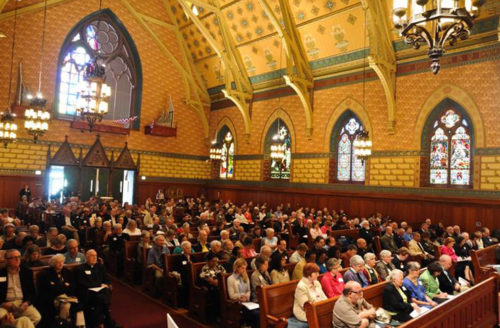 [Episcopal News Service] Members of the dioceses of Chicago and Quincy unanimously agreed June 8 to reunify, something that no other dioceses have done in the Episcopal Church for 70 years.

“This is a day that both dioceses have yearned for,” Diocese of Chicago Bishop Jeffrey D. Lee, who will be bishop of the reunified diocese, said in a press release issued after both dioceses acted. “Now the people of Chicago and the people of Quincy will join together in witnessing to the power of the Risen Christ who overcomes all divisions.”

Quincy Provisional Bishop John Buchanan added that “the faithful people of Quincy have shown us all what it means to live as witnesses to God’s mission in the Episcopal Church.”

“Their unflagging commitment to our common life will make them invaluable leaders in the Diocese of Chicago,” he said in the same release.

“The mood here is jubilant following the vote,” according to a tweet from Quincy’s Cathedral Church of St. Paul in Peoria after that diocese’s vote. “It’s a family reunion that’s been a long time in the making.”

Presiding Bishop Katharine Jefferts Schori, who is chairing the church’s Executive Council June 8-10 meeting in Linthicum Heights, Maryland, welcomed the news. “The wider church can rejoice at the mutual decision of Quincy and Chicago to reunite for missional purposes,” she told Episcopal News Service. “There is blessing abundant to be found in committing to new ways to engage, serve, and love our neighbors. May this be a rich blessing to the people of Illinois.”

The Rev. Gay C. Jennings, House of Deputies president and vice chair of council, placed the decision in the larger context of the Episcopal Church’s consideration of how it needs to reorganize to meet the needs of a rapidly changing world.

“Restructuring begins at home, and today, the leaders of the Episcopal dioceses of Chicago and Quincy have set an example for the rest of the church to follow,” she told ENS. “The Holy Spirit is calling all of us to find new ways to collaborate, streamline and reunify, and they have answered that call with foresight and grace.”

“I am particularly thankful for this very happy day for the people of the Episcopal Diocese of Quincy who have shown us all what it means to be faithful Episcopalians.”

A majority of bishops and standing committees of other Episcopal dioceses must consent to the reunion, according to Episcopal Church Canon 1.10.6. Assuming that consent is given, the two dioceses will hold their first unified convention Nov. 22-23 in Lombard, Illinois, according to a press release issued after the June 8 votes.

In November 2008, about 60 percent of the members of several congregations in the Diocese of Quincy left the diocese and the Episcopal Church to join the Anglican Church of the Southern Cone.

Then-Quincy Bishop Keith Ackerman announced Oct. 29, 2008 that he would retire on Nov. 1 of that year. The diocesan synod gathered six days later and a majority voted to leave the Episcopal Church.

About a year later, Jefferts Schori released Ackerman from his ordination vows after he told her he planned to function as a bishop in the Diocese of Bolivia. He is now the bishop vicar of the Anglican Church in North America’s Diocese of Quincy (which includes churches in Colorado, Florida, Illinois, Tennessee, Texas and Wisconsin) and president of the Forward in Faith North America Council.

Buchanan, the retired bishop of West Missouri, was elected provisional bishop of Quincy at a special reorganizing synod in April 2009. According to the reunion agreement, Buchanan will become an assistant bishop in the Diocese of Chicago.

Buchanan said during his June 8 sermon that at that 2009 convention, the diocese “set out on a highway that would take us right to the heart of the Diocese of Chicago.”

The process that led to the June 8 votes began in 2012 when the Quincy Future Committee approached Lee and the Diocese of Chicago about the possibility of reunion, according to the press release. Members of the Diocese of Quincy attended Chicago’s convention in November 2012 when that gathering unanimously agreed to pursue reunification.

As reunification discussions progressed, members of the Diocese of Quincy began participating in the life of the Diocese of Chicago, the release said. Two Quincy congregations are part of in Chicago’s two-year congregational development program called Thrive, and clergy and lay leaders have attended retreats and training events with their Chicago colleagues.

In March, Tom Hunt, a member of the Cathedral Church of St. Paul in Peoria, was elected to the board of trustees of Episcopal Charities and Community Services in Chicago.

“I love the process of becoming part of the Diocese of Chicago and its ethos of adding to our Episcopal tradition without taking away from it,” the Rev. Paula Engelhorn, rector of St. George’s Episcopal Church in Macomb in the Diocese of Quincy and a Thrive participant, said in the release. “Quincy has been isolated for 30 years, and now the Spirit is blowing in. Now we get to grow; now we get to be part of the wider church and its movement toward including all people and embracing the Millennium Development Goals. It’s a wonderful move for us.”

Hal Stewart, second vice-president of the bishop and trustees of the Episcopal Diocese of Chicago and a convention delegate from Church of the Holy Comforter in Kenilworth said that the trustees of Chicago see in Quincy “a group of dedicated, faithful Episcopalians.”

“They desire nothing more than to return to the fold and, once again, to be part of a strong Episcopal diocese and the wider Episcopal Church,” he said. “This reunion is the compassionate thing to do and it is the right thing to do.”

Prior to the June 8 vote in Chicago, Lee said in his convention sermon that Episcopalians in the Diocese of Quincy “have been daring to practice a radical trust in God’s overflowing goodness.”

“Their commitment to Christ and to the fellowship of this church is an act of sheer, foolish, godly trust,” he said. “Today we stand with them and we pledge to join them in learning to sow the seeds of God’s love for this world with absolutely wild abandon. We join them in seeking to practice a genuinely catholic witness to the love and mercy of God, one that knows to the depths of its being that no one, no one, stands outside the economy of grace.”

The Diocese of Quincy has been involved in property litigation since the 2008 split. The testimony phase of the lawsuit in Illinois state court concluded April 29 and the parties are awaiting a decision, according to an information sheet posted on the Chicago website. The reunion agreement calls for all of Quincy’s property and assets to become those of the reunited diocese.

St. Paul’s in Peoria will cease being a cathedral and become a parish church of the reunited diocese under the terms of the agreement, which also spell out issues such as integrating Quincy Episcopalians into the diocese’s governance and dealing with Quincy diocesan employees.

Springfield, the other Episcopal Church diocese in Illinois, was not part of the reunification discussions. Close to 5,230 Episcopalians are active baptized members in that diocese’s 36 congregations, and the average Sunday attendance across the diocese was 1,945 in 2011, according to the most recent statistics.

The only other time an Episcopal Church diocese has reunited with its “parent” diocese occurred in 1943 when the then-Diocese of Duluth rejoined the Diocese of Minnesota, according to researchers at the Archives of the Episcopal Church. The two dioceses had been created in 1895 with Minnesota being based at Faribault in the south central part of the state and what was at first called the Missionary District of Duluth based in its namesake city in the northeast on Lake Superior. The district became a full-fledged diocese in 1907.

After the annual convention of Fond du Lac and a special convention of Eau Claire appeared to have voted on Oct. 22, 2011 to ask the 2012 meeting of the General Convention to approve what is called “junction,” the decision had to be set aside. A recount of the Fond du Lac voting showed that the original understanding of the vote in the lay order being 53 in favor and 51 opposed was found to be, in fact, 53 no and 51 yes.