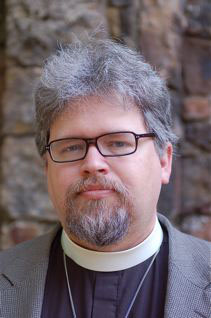 Father Andrew was raised in the Episcopal Church, growing up in the North Panhandle town of Borger, Texas. He met his wife, Melanie, while a student at TCU and was part of Trinity’s own campus ministry throughout college.

Shortly after college and their wedding, the Wrights moved to Sewanee, Tenn., for Andrew to begin his seminary studies. He graduated with a Master of Divinity from Sewanee in 1995 and was ordained by Bishop Sam Hulsey on June 4th that year. Andrew has since worked in Tennessee, Nebraska, New York, New Jersey, Maryland, and, home at last, in Texas, serving parishes along the way as Assistant, Rector, Priest-in-charge, and most currently as Rector of Saint Anne Episcopal Church in DeSoto, Texas.

Andrew received a Master of Sacred Theology degree in 2003 from the General Theological Seminary and a Doctor of Theology degree in Liturgical Theology in 2012 from General as well. His wife, Melanie, is also an Episcopal priest, ordained in 2006, and serves St. Alban’s Episcopal Church in Arlington as priest-in-charge.

The Wrights have three children, Aidan (19 at UTA), Benjamin (17), and Macrina (13). Aside from youth, children, family, and campus ministry, Andrew has an abiding interest in theater, science, and storytelling in all its forms.

Father Andrew’s first day in the Trinity Church office will be Tuesday, July 9. His first Sunday at Trinity will be July 14.