[Episcopal News Service] Barely a week into the cleanup after a string of tornadoes killed dozens and devastated parts of Oklahoma, the Rev. Paul Snyder’s role had shifted from first responder to “helping people try to get order back into their lives.”

“I could pretty much tell by the address if the home was in the tornado path. Some were pretty close,” Snyder said during a May 30 interview with the Episcopal News Service. “I’d go by their homes to make sure they were still there, and knock on the door and say ‘hey, you need to call your priest’.”

By Thursday (May 30), like many others in the community, his focus had shifted to “digging through stuff” as Moore City residents continued to sift through debris that had once been their homes and neighborhoods.

St. Christopher’s rector, the Rev. Emily Schnabl, said that two of four parish families living near the tornado’s path had sustained damage to their homes. A day earlier (May 29), a team of church volunteers had gone to assist them and wound up helping others as well.

“There’s no introductions; you just walk into somebody’s yard and just start cleaning,” said Schnabl who on Facebook called the devastation “a 17-mile open wound, naked to the sky … There is no space to take it all in.”

Schnabl said the immensity of the devastation felt “unspeakable, the contents of homes open, all the rubble, stuff’s just pulverized … I’m just not able to put it into words today.”

Snyder, an Oklahoma native who also responded during the 1997 bombing of the Alfred P. Murrah Federal Building and the 1999 tornado outbreak that killed dozens and caused billions of dollars of damage, said that not just the sights and sounds, but smells also, brought it all back to him.

“The smell of everything is different,” he said. “There’s so much dust and dirt on everything that even later when you watch it on television, the smell comes back to you. It just seems to hang around.”

For first responders and others seeing the devastation it “gets pretty emotional at times,” he said. Like seeing livestock impaled by flying debris and that had to be destroyed.

And the officer who discovered the bodies of a mother and infant child. “He came to talk to me about it the next day. It was still working him pretty good,” he said. “He couldn’t go to bed for awhile. He just kept working; he felt he didn’t get to the baby in time so I got to keep going, I’ve got to get to somebody.”

Ultimately, “it’s all a matter of being there for people in a crisis situation,” Snyder said. “Sometimes, it’s a spiritual crisis, sometimes it’s physical, but it’s about being there when people are in need or hit bottom and trying to lift them back up.”

Jera Kiespert and her family know what that’s like. 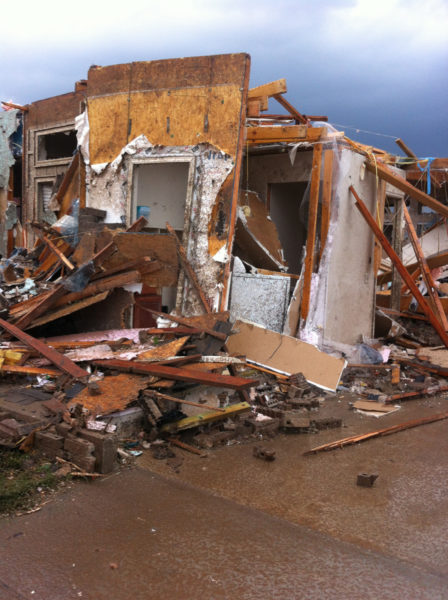 The Kiesperts home in Moore was destroyed by the May 20 tornado.

Their home in Moore was destroyed but within a few days’ time, St. Mary’s Episcopal Church in Edmond gave them a place to live, and much, much more, she said during a May 30 telephone interview with ENS.

Kiespert, a teacher who also directs several childrens’ choirs, said the first thing she saw when she emerged from a storm shelter after the May 21 tornado, was a neighbor, trying to dig his wife out of the splintered remains of their home.

“I was not prepared for that sight,” she said. “I was in shock; I saw other neighbors climbing out of rubble, people were texting me, the phone was ringing.”

Within a few days, after moving between hotels and the homes of family and friends, they received an amazing invitation: use of a home owned St. Mary’s Church, where she and Jason had previously served as choir members and where their children had been baptized.

“It’s a great stewardship story,” said the Rev. Mark Story, St. Mary’s rector. “We received the house as a bequest” from a parishioner who died about two years ago. “His gift was really quite amazing to the church and made it possible for Jera and Jason and their children to have a place to stay. We’re really thankful.”

For Jera Kiespert, 35, it was nothing short of miraculous.

“We got a call from a friend about the house” who met them the next day with the key.

“It’s a beautiful home and what was even more amazing was, we walked in and the church ladies had been there,” she said. “There were beds with fresh linens, and clean towels, there were supplies in the kitchen. It felt so good to walk into a home and feel it is home,” she added, breaking into tears.

“When you think about it, it is all just stuff, but it’s important too. They gave us gift cards, money for groceries, there were clothes and toys for the kids. It is so relieving as a mom to see your kids go through something like this and then be in a new place and run for the toys and to feel like we’re good, we’re going to be OK,” she said.

“People have been lifting us up so much, with help, and with prayers, phone calls, we’ve felt so much love and support, it’s really amazing. It’s really hard when you’re so used to being on the giving end; when you have to be on the receiving end, it’s so humbling.”

Story said equipping the four-bedroom home for living “was a blessing to the church.

The church had been planning to lease the home but offered it rent-free to the Kiesperts; their insurance policy has provided for some temporary housing expense, he said.

St. Mary’s school children also sent three truckloads of food and other items to collection centers, Story said. “They also made prayer squares out of fabric and sent them to children as comfort blankets.

“The children prayed over them as they were making them,” Story said. “That was where they had shifted their focus after they sent the relief items down.”

The Rev. Canon José McLoughlin, canon to the ordinary at the Diocese of Oklahoma, said May 30 that the clean-up and recovery efforts are still very much in initial stages and that financial contributions, prayers and other assistance is welcomed.

“A large part of what we are doing is sharing information and continuing to provide resources for short-term needs, for people who need clothes, gift cards, and assistance for housing,” he said.

The American Red Cross and the Federal Emergency Management Agency (FEMA), have established drop-off centers for donations throughout the city as well as coordinating volunteer efforts. He continues to consult with Episcopal Relief & Development and others as the relief and recovery efforts continue to unfold.

“Money is still the best thing to give at this point,” he said. “We are being contacted by people from out of state who want to come in and help, and we’re making sure we coordinate with them … but we have not even had a week yet of clean-up.”

He emphasized that the need will continue for a long time, especially once the media spotlight is gone. “We want to do things smartly and not duplicate efforts and make sure people know they are not being forgotten, both in the short-term and the long-term,” he said.

“We want to be part of the solution, whoever is doing the necessary work of recovery,” he added. “Once people get a better idea of what their insurance companies are going to do we will know better where gaps in services and housing are and we’ll be able to assist with those.”

The outpouring of support has been overwhelming both from inside and outside of Oklahoma, he added. “There’s a tremendous spirit here,” he said. “Oklahomans are half-full kind of people … and they’ve just really stepped up to help.”

Kiespert agreed. “There’s been so much support. People have offered to do the laundry, to babysit, whatever the need is. I can’t describe it, it’s so amazing, just the selflessness of people to pitch in and to try to get somebody else’s life back in order.”

In the midst of the devastation, Kiespert experienced many more signs of hope. Although their home was destroyed, their bedroom was still standing, and she was able to recover a few furniture items, photo albums and a ceramic doll, made in the 1800s, that her grandmother had given her.

She also couldn’t get the dog to go into the shelter with her, and she assumed he’d been killed. But her husband Jason found the dog unharmed later in the driveway.

They celebrated May 29 when Jason turned 37, she said.

“I told him I have to cook because that’s our tradition so I was trying to fiddle round in this new kitchen and I baked some chicken and our new neighbor brought over this wonderful chocolate cake. We ate cake and sang happy birthday to Dad and watched TV and it was normal, and it was wonderful.

“I’m just taking it one day at a time and putting the pieces back together. My biggest priority was making sure my kids felt safe and had a home and, once we were able to come here, their attitude changed, their demeanor changed, they knew this is where we’re going to be and it’s OK. As a mom, that was incredibly gratifying.”