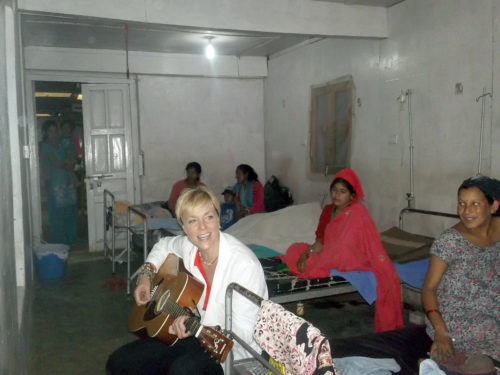 Karin Feltman plays guitar at a hospital in Dadeldhura, Nepal, during a visit there in May 2012. Feltman, a member of St. Margaret’s, Lawrence, Kansas, will become a long-term missionary there beginning in 2014.

[Episcopal Diocese of Kansas] Karin Feltman, by her own admission, is pretty fearless. She is terrified of only two things — spiders and heights. So why is she preparing to become a long-term missionary in Nepal, where spiders are everywhere and where eight of the world’s 10 tallest mountains are located?

“My whole life has led up to this point,” she said. “I’m fulfilling God’s purpose for my life.”

Feltman, a member of St. Margaret’s, Lawrence, Kansas, plans to leave for Nepal early next year and stay for at least five years and maybe longer.

She’s no stranger to mission trips — she’s done 15 of them since 2005, including short-term relief work after Hurricane Katrina and the earthquake in Haiti, and she’s also headed medical trips to Kenya (she’s a nurse) through the diocesan Kansas to Kenya ministry.

But this experience will be different. She will move there to become part of a community and work to reduce its poverty and provide long-term sustainability.

After a year of language and cultural immersion in the capital of Kathmandu, she will work in a mission hospital in the western Nepali village of Dadeldhura. There, she’ll help treat things like leprosy and tuberculosis and bites from tigers, leopards and bears, plus assist with surgeries and some of the 1,400 births that take place there each year.

Since this is the only major hospital to serve a region with more than a million people who live in dire poverty, she knows she will see a wide variety of cases.

In addition, Feltman said she will provide community health education to neighboring villages and will work to prevent human trafficking. Nepal is a source country for girls and boys who are enslaved by this crime, often forced to engage in the sex trade.

Going full-time
So how did Feltman go from her comfortable life in Lawrence, where she owns a home, works at the local hospital, is active at St. Margaret’s and was able to make mission trips overseas, to a life-changing decision to pack up for Nepal?

Part of it was practical. “I’d do one trip and then was planning the next one,” she said. “It was hard on the hospital to plan.”

Besides, she was hearing God’s call. “God was telling me the next step is full-time.”

So, a couple of years ago, before Feltman even knew where she might be going, she paid off all her debts, sold half her belongings and took in a roommate who can help care for her house while she’s gone (she will return on periodic trips home). She even cut her hair short to make it easier to maintain. 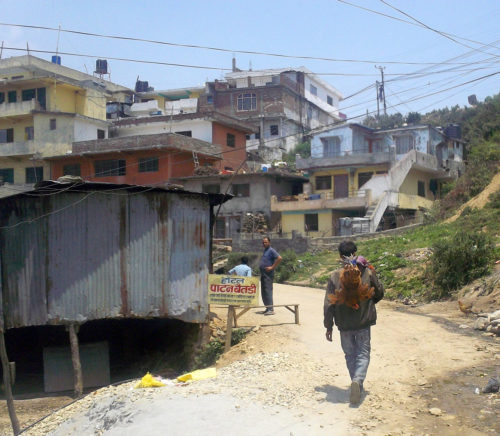 A man carries live chickens on a pole as he walks along a street in Dadeldhura, Nepal, during a 2012 visit to the Asian country by Karin Feltman. A member of St. Margaret’s in Lawrence, Kansas, Feltman was in Nepal exploring a call to become a full-time missionary there.

Why Nepal?
So why Nepal? Feltman laughed as she described the path that led to this small country in Southeast Asia nestled between India, Tibet and Bangladesh.

“I’d never even been to Nepal,” she said. “I thought if I went anywhere it would be to Africa. I love Africa and have a heart for Africa.”

She decided to become part of a Christian missionary group called TEAM (The Evangelical Alliance Mission) that works in Chad, Zimbabwe and Nepal. As she prayed for an outcome that reflected God’s agenda and not hers, every door in Africa kept closing. “Only Nepal worked,” she said.

To test her sense of call, she went to Nepal for two weeks in May 2012. While there, she said, she faced so many spiritual battles, “I felt like Job.”

When she arrived in Nepal, a political strike shut down all travel and left her stranded in Kathmandu not knowing a soul. She experienced spiders everywhere, a language barrier and coming face-to-face in the dark with a jungle cat.

Eventually she made her way to the hospital in Dadeldhura where she will be working and was warmly welcomed by the missionaries there. “I received a lot of support from them,” she said.

She returned home convinced of her call to work in Nepal, knowing that by law she can’t openly speak of her Christian faith and instead will share the gospel through her acts of service and love.

Parish is behind her
Feltman decided to set early 2014 as her target date to leave. Her sister died in late 2012, and she didn’t want to leave her family to celebrate the holidays this year without her, too.

She even started classes to tackle her spider phobia. By March she was able to hold a large tarantula in her hand.

She also had to get busy raising money. As is customary for missionaries, she has to provide her own financial support while serving overseas. TEAM, which has had a presence in Dadeldhura since the 1960s, has determined she’ll need to raise $3,600 a month, which covers not only her living expenses there but also health insurance, taxes, travel to and from Nepal, and ministry expenses while there.

“They know how much support is needed so missionaries don’t have to struggle,” she said. “And it’s the same amount whether you’re a doctor, nurse or teacher.”

The rector, the Rev. Matt Zimmermann, created support teams to help with fundraising and prayers, now and after Feltman leaves. This spring, members have been learning more about Nepal, including monthly after-church suppers featuring native food.

Some people have made monthly pledges, and others have made one-time gifts.

Feltman said so far she’d raised 52 percent of her goal. What she needs most is pledges of ongoing monthly support.

“I am confident God will raise the money,” she said. “He will make it possible for me to go.”

When she does, she suspects she’ll have to battle loneliness. “My family and friends are all here,” she said. “I’m going alone.”

But she said none of her friends are surprised that she’s made this decision. “They know that this is exactly who I am and what I should be doing.”

Even if it means living with spiders.

— Melodie Woerman is editor of The Harvest in the Episcopal Diocese of Kansas, where this article appeared in the March-April issue.