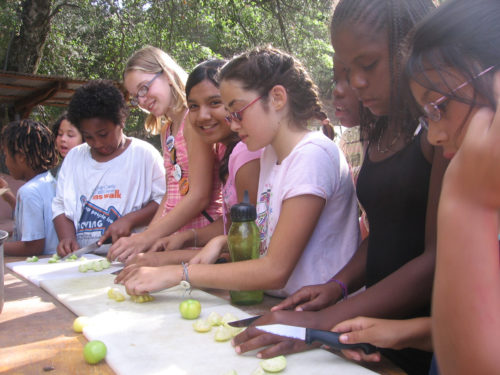 Youngsters at Camp Stevens in Julian, California, cut up freshly harvested produce to prepare it for canning or drying. Planting, tending, harvesting and preserving food in the organic gardens has become a favorite activity among campers of all ages. Photo: Camp Stevens staff

[Diocese of Los Angeles] For Tim Alderson, the new executive director of “Seeds of Hope,” coordinating efforts to feed the hungry and undernourished throughout the diocese is a pretty simple equation—lots of churches have available land, lots of people need food — so, he says, “Let’s get to work.”

That “three million people, including a quarter of all the children, living in the six-county Diocese of Los Angeles don’t know where their next meal is coming from” is reason enough to get started right away, according to Alderson.

“The impacts on individuals and communities from food- related disorders are devastating. The problems are so pervasive that there is not one of us in the diocese who is not affected,” he said in a recent interview.

“We are all in this together; we can farm the diocese,” said Alderson, a third-generation California farmer. “We can take an agricultural view of our 139 neighborhood congregations, 40 schools and 20 other specialized service institutions, seeing the abundant food-producing potential lying dormant here.”

Since Bishop Diocesan Jon Bruno announced this latest Hands in Healing ministry initiative Alderson has visited community gardens from Camp Stevens in Julian to the Abundant Table Farm’s project in Oxnard and lots of places in between.

“I’ve been to about 30 locations and since then I’ve learned of about three or four others,” he said. He also has gathered representatives from congregations growing food and launched ambitious efforts to work with a Christian, Jewish and Muslim interfaith farm project.

Bruno said the impetus for Seeds of Hope grew out of seeing in many neighborhoods of the diocese “on a daily basis the demand for food distribution serving families, seniors and others in need.

“While many of our congregations have been involved for some time in reaching out to meet these needs, additional parishes and missions now are expressing a desire to get started in the area of community garden and food distribution. These new start-ups can benefit greatly by learning from long-time providers.

“We don’t need a lot of acres, we just need commitment,” he added.

No effort is too small, says Alderson, who envisions growing food in everything from window boxes and rooftop gardens to “farm scale food production in our rural areas.”

Already, the ministry is blossoming.

“Prince of Peace Church in Woodland Hills is a great example,” he says, of the way the ministry has already exploded into wonderful possibilities.

The church is a host site for the West Valley Food Pantry, an interfaith coalition of ten congregations in the west San Fernando Valley providing emergency food to the area’s needy and homeless. Volunteer-operated, it serves balanced food packages to more than 4,000 people, or 37,000 meals each month, according to the church website.

During Alderson’s initial site visit to Prince of Peace he noted that “they had a nice vegetable garden and … a big chunk of unused land.” Congregational representatives told him they’d thought of possibly planting an orchard. A few days later, Alderson received a donation of 150 fruit trees. He managed to secure a drip irrigation system and planting help; the orchard was dedicated April 21 during regular 10 a.m. Sunday worship.

“A little creative thinking and a couple of generous gifts, and now they will be able to produce as much as 25,000 servings of fresh fruit for their food pantry clients each year from land that seemed to have already been put to full and productive use as a church,” Alderson said. “To do this with resources we didn’t even notice before is almost miraculous.”

It all started when the Goldhirsh Foundation issued an L.A. 2050 Challenge (www.la2050.org) offering several $100,000 grant opportunities to organizations participating in shaping a healthy future city. Alderson scrambled to submit a proposal on time and reached out electronically to the diocese, asking for votes when the foundation decided on a social media funding approach.

“We proposed three pilot projects to plant orchards in three different types of locations — urban, suburban, with different demographics, at a church, at a synagogue, at a mosque,” he said.

Although they didn’t get the grant – it went to a city parks project – the interfaith connection continues.

Alderson’s vision is that Seeds of Hope will help to “plan and coordinate our food production and distribution on a diocesan scale, targeting production geographically and seasonally according to need,” he said. 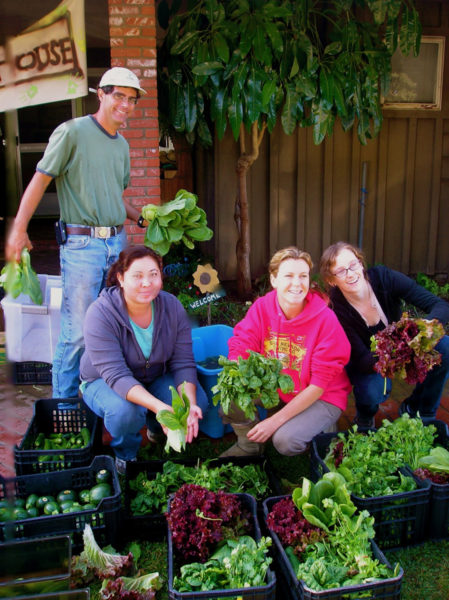 That will include providing practical, how-to garden support and resources, including an internet-based forum for the exchange of ideas and information as well as volunteer crews to move around the diocese for planting, tending, harvesting, packing and delivering food, Alderson said.

He also is eagerly anticipating the upcoming clergy conference, hoping to begin a conversation among clergy, scholars and theologians that will result in a Christian theology of food.

Alderson, 52, “was born on a farm in Salinas, and started working in the fields at age 11.” He founded AgriGator Inc., a multi-national soil amendment company and is a former senior warden at the Church of Our Saviour in San Gabriel.

“Community gardens on church property create an amazing opportunity for outreach and congregational development,” he said. There is potential for community empowerment, cross-cultural understanding, and spiritual practice, he added.

She said that one of the greatest surprises of farming is “that the closer you get to working the land, the more the Bible and liturgy make sense. We are constantly saying, ‘Oh, now the Eucharist makes sense. Now, the Bible makes sense.’ The light bulbs go off.

“God comes to us in food,” she added. “Every day, we hold up bread and wine and say ‘this is Jesus’ and how does that inform meals we have around our own tables at home? What are the connections?”

A ministry of agriculture

For Alderson, the connections are many.

No stranger to coordinating garden networks, Alderson was the founding chairman of the California School Garden Network of some 40 public and private organizations that secured funding for more than 4,000 school gardens.

The group also developed extensive training for educators, and created lesson plans aligned to the state standards for teaching all core subjects, kindergarten through 12th  grade, in a garden setting, along with numerous other accomplishments.

While he’d much rather talk about his vision for Seeds of Hope than himself or why he accepted this new role, Alderson will say this: “The short answer is, it means a lot to me.

“The longer answer is, it has to do with my farming roots and my personal faith. Growing food and giving it to those in need is very satisfying. It’s a tangible expression of my own personal faith,” he said.

Alderson currently serves as president of the Schools Agriculture and Nutrition Program, appointed first by Governor Arnold Schwarzenegger and then again by Governor Jerry Brown.

Schwarzenegger also appointed him to the Governor’s Summit on Health Nutrition and Obesity, and former State Superintendent of Public Instruction Jack O’Connell appointed him to his California School Garden Advisory Committee.

He is married to Tracy and has two sons, Evan and Trevor. He lives in Pasadena, where he has served as chairman of the Recreation and Parks Commission and was appointed by the mayor to the city’s Workforce Housing Task Force.

He earned a bachelor of arts degree from Biola University and has also studied at the University of Judaism and the General Theological Seminary of the Episcopal Church.

One of the biggest surprises about Seeds of Hope thus far is that it’s been a way to reconnect “with my 82-year-old dad, who has Alzheimers,” he said. “This project has really lit him up.”