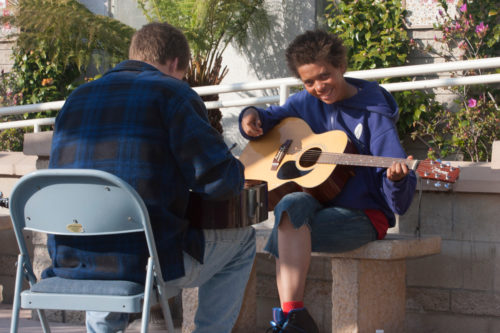 Amber, one of the participants in the Taking Music to the Streets program at the Episcopal Church Center in Ocean Beach, California, strums a guitar during a lesson with volunteer teacher Packy Bergquist. The program offers free weekly music lessons to homeless youth. Once a youth returns three times to the program, he or she receives a free instrument. As trust builds, volunteers assist the youth with safe living situations, education, job training and general life skills. Photo/Jeffrey Sitcov

[Diocese of San Diego] “I like all kinds of music,” said Kayla, a slight young woman with a panda bear hat and an air of sweetness and innocence. “There’s this song by Jason Aldean called ‘Don’t Give Up on Me’ that talks about love. I love that song! It makes me want to play guitar.”

Kayla is one of 75 homeless youth who have walked through the gates of the Episcopal Church Center in Ocean Beach and received a free music lesson and a hot meal. Through a partnership with Photocharity, a nonprofit that raises awareness about homeless and disadvantaged youth, the center welcomes people ages 12 to 24 to learn an instrument and feel at home for a few hours every Sunday afternoon.

This particular Sunday, a soft rain was falling, but the doors stood wide open as young people trickled in. Jeffrey Sitcov, founder and executive director of Photocharity, buzzed around the parish hall, welcoming people. He moved quickly, carrying a stack of T-shirts and six guitars. He talked to donors and checked kids in all at once. When he saw a familiar face, he gave a hug and said, “Welcome! Good to see ya, bro!” He looked each person full in the face, locked eyes and said, “Welcome!”

Kids sauntered in, some on skateboards. One, probably 8 years old, arrived with his mom, eager to learn the harmonica.

“We just came in to see what’s up,” said another when Sitcov asked what brought him and his friends through the doors. Everyone is greeted with a handshake and a proper introduction; each person is met with dignity. A donor has brought home-made chocolate chip cookies, which no one turns down.

Within 20 minutes the parish hall transformed into a lively music lab with different groups focusing on guitar, drums, piano, harmonica, bass and ukulele. The drummers sat outside, sheltered by the balcony overhang. Once lessons got underway, the guitar players headed for the sanctuary because the parish hall grew too noisy.

A volunteer teacher sat with a young woman and asked, “Do you like the blues?”

He played a classic blues progression on the acoustic guitar. She wasn’t sure she liked it, so he played reggae. Her face lit up, and they set to work.

When participants return for the third time, they receive a free musical instrument of their choice.

Building trust
The Taking Music to the Streets program aims to improve the self-esteem of these young people, to show them that people care about them and to create trust, which eventually leads the kids into shelters and programs that help them break the cycle of homelessness.

“We give them something good for the heart and soul and that helps them pay for their meals,” said Sitcov. “Then when they’re feeling good and they trust us, we help them get into programs that get them off the streets.”

The program began March 10 at the church center.

“Without this program, there is no way I would have an opportunity to learn how to play and get an instrument,” said Casey, one of the participants. “Thank you.”

“I’ve wanted to get my own guitar for over six years,” said Amber, another participant. “I am excited about earning my guitar!”

These homeless youth have heartbreaking stories. One was kicked out at age 14 because of her sexual orientation. Her mother was addicted to prescription pills and would badger her daughter for them. She wanted a better life for herself so she left home.

Another young woman has been homeless since she was 12. She likes the music program because she feels respected. She looks forward to getting off the streets.

In the program’s first 10 weeks, 75 youth attended classes. Twelve returned three times or more. Ninety-five percent of these youth are 18 to 24 years old and none have many marketable skills. In the city of San Diego, there are 25 beds and a one-year waiting list for homeless kids in this age bracket.

Sitcov, the founder of Photocharity, expressed thanks to the Episcopal Church for allowing Photocharity to have classes for “the throwaway homeless youth that no one is helping.”

“You are keeping hope alive for these young people. This is the beginning of breaking the cycle of youth homelessness,” said Sitcov.

The partnership between Photocharity and the Episcopal Church Center began through an unlikely acquaintance. Susan Rackley attends church at the center, but not for the Episcopal liturgy. She is a member of The Oasis Christian Fellowship, a nondenominational church that meets in the parish hall. When she learned about Photocharity’s need for space to teach music to homeless kids, she reached out to the owner of the property, the Episcopal Diocese of San Diego, who reviewed the proposal and said yes.

“Homeless people know this place well,” Rackley said. “They have dinners here on Wednesday nights and receive food from the pantry on other days. This place has been so instrumental in the success of the music program. They’ve been open, flexible. You think of Episcopalians as a little uptight, but not this place!”

History of service
The center in Ocean Beach has a long history of offering peace and sanctuary to all regardless of creed. It was founded in 1922 as Holy Trinity Episcopal Church, which it remained until 2006, when its rector led the congregation out of the Episcopal Church. After a legal dispute, the property was returned to the Episcopal Diocese of San Diego in 2011.

Ministries to homeless people, which began more than 20 years ago, continued uninterrupted through the change of leadership thanks in large part to Nancy Holland, canon for mission enterprise and director of the Episcopal Church Center.

“I’m so proud of Nancy and grateful for her leadership and presence,” said Diocese of San Diego Bishop James R. Mathes. “She has been a remarkable ambassador for the church in Ocean Beach, taking up residence on the city’s crime-prevention task force while bolstering existing programs at the center and making room for new ones. She has turned this church into a life center for the community, and she’s done it with patience, grace and a lot of quiet listening. We are gifted by her business acumen and her strategic thinking.”

Opportunities to partner with others in the community is a key to success, said Holland. “It’s the only way we’re going to end homelessness in San Diego.” Currently there are more than 3,000 youth, ages 12 to 17, who are homeless in San Diego, she said.

Photocharity’s Sitcov is a professional photographer who rubs shoulders with celebrities such as B.B. King, Elton John, Billy Joel and Bruce Springsteen. He procures their autographs on musical instruments and memorabilia, which he then sells or auctions. All proceeds support the mission and vision of Photocharity, which is dedicated to raising awareness and funds for charitable organizations that empower homeless and disadvantaged youth to make better choices.

“Nancy’s a joy to work with!” exclaimed Sitcov. “She trusted Photocharity and our vision. The facility is great – we love it. It’s a perfect place to have classes.”

Rackley saw Photocharity featured on a local television station. Her father had just died, and she was looking to make a memorial gift in his honor. She researched Photocharity and found that it was a worthy nonprofit that devoted a high percentage of each dollar to helping kids on the streets.

“Jeffrey’s amazing,” said Rackley. “He’s got the energy of an Energizer bunny, and he’s a heck of a fundraiser. He’s not afraid to ask for autographs from celebrities to raise money for this program. He has a big heart and is always looking for ways to reach homeless kids.”

Said Casey, “This program gives me more stability every week, I have somewhere good to go no matter what, where I can play instruments, hang out with nice people and have dinner. I’m very thankful. It is a blessing.”

— Hannah Wilder is communications director for the Episcopal Diocese of San Diego.